Borsa Istanbul CEO Mehmet Hakan Atilla stepped down Monday in a move possibly linked with the impending US trial of Turkey’s Halkbank, where he was convicted of helping Iran skirt US sanctions. 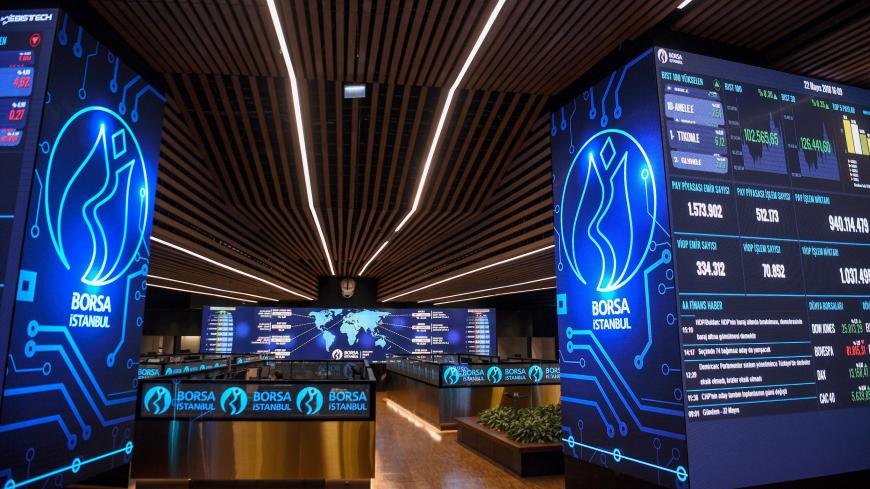 Graphics and figures are screened on the floor of the Borsa Istanbul on May 22, 2018, in Istanbul. - OZAN KOSE/AFP via Getty Images

ISTANBUL — Mehmet Hakan Atilla, a Turkish banker convicted of helping Iran evade US sanctions, resigned as head of Turkey’s Borsa Istanbul Stock Exchange, according to a statement released by the exchange Monday.

Atilla resigned “of his own accord,” according to the statement, and the decision was accepted by the board of directors Monday. Last week, Bloomberg reported Atilla was preparing to step down later this month, citing unnamed sources, though no motives have yet to be confirmed.

The move comes ahead of a New York trial of the Turkish state-owned Halkbank, expected to begin in May. The bank faces a fine of up to $20 billion for facilitating transactions that helped Iranian officials circumvent US sanctions in 2012 and 2013 for the nation’s nuclear program. As a former deputy executive of Halkbank, Atilla was convicted in 2018 of participating without profiting in the scheme and served a 28-month prison sentence in the United States.

After his release and return to Turkey in 2019, Atilla was appointed as CEO of the Borsa exchange by then-Finance Minister Berat Albayrak, who is also the son-in-law of Turkish President Recep Tayyip Erdogan. Some observers have suggested the resignation might be an attempt to restore strained US-Turkey relations before the Halkbank trial, though many remain puzzled by the development.

“I think it’s another pointless initiative, meaning it’s not going to make any difference in terms of the specific trial and the overall US-Turkey relationship,” Wolf Piccoli, co-president and political risk analyst at Teneo Intelligence, told Al-Monitor.

He added, “Ankara has been unable to read the US system and understand how it works for a very long time, and this is just the latest example.”

Piccoli said Atilla’s resignation could also be a gesture to show key financial institutions in Turkey are changing course amid efforts to gain credibility among investors and attract foreign capital.

In recent weeks, Turkey has been one of the hardest hit emerging market economies under pressure from rising oil prices and global bond yields. Driven primarily by external developments, the Turkish lira slid to its lowest point since late December, trading at 7.70 per US dollar at 7 p.m. Istanbul time Monday.

Coupled with domestic developments such as rising double-digit inflation and speculation Albayrak may return to an economic management role in the Turkish government, the Turkish economy is highly exposed to financial pressures currently weighing on emerging markets.

Higher day trading traffic and speculative bets have also rattled Turkish stocks, as seen with the 5% rise in Halkbank’s stock Monday morning following Atilla’s resignation. The stock ended the day slightly negative, trading at 5.39 liras per share, down from a peak of 5.49 liras.

Atilla’s departure comes as Borsa Istanbul’s owner, the Turkish Wealth Fund, plans an initial public offering of the exchange in 2022. An analyst who requested to remain anonymous said the resignation may also have been the result of government attempts to “micromanage” the exchange, which prompted him to step down.

Still, most analysts viewed the announcement Monday as an effort to “appease Washington” and the new administration under President Joe Biden. The Halkbank case, along with Ankara’s 2019 acquisition of Russian-made S-400 missiles, have been central concerns for US foreign policy circles tasked with US-Turkey relations.

In the past, Erdogan condemned Atilla’s conviction as “politically motivated” and as a ruling with “no respect for the law.” In the upcoming New York case, Halkbank faces charges of fraud, money laundering and sanctions busting offenses that could see the institution expelled from the international SWIFT banking system. If found guilty, the Halkbank ruling could send ripple effects through the Turkish economy that could trigger a broader recession.

by Murielle KASPRZAK and Joseph SCHMID | AFP | May 26, 2022
END_OF_DOCUMENT_TOKEN_TO_BE_REPLACED