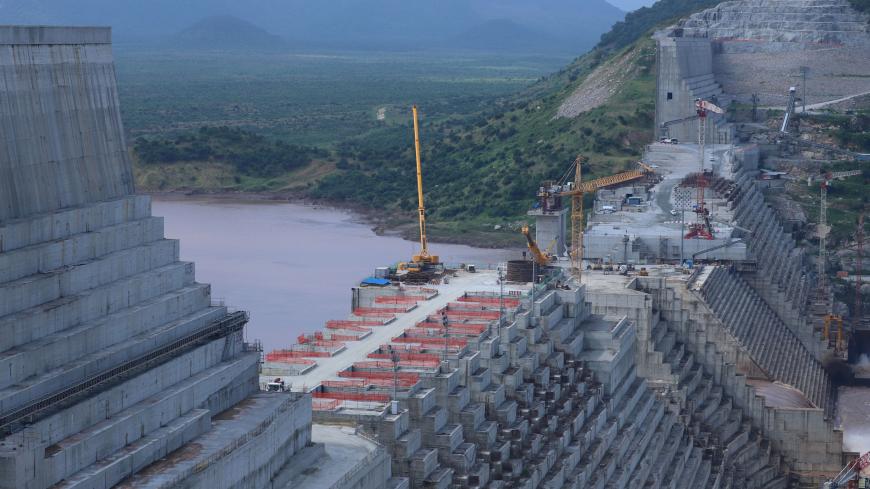 CAIRO — US President Donald Trump sponsored a meeting of the foreign ministers of Egypt, Sudan and Ethiopia Nov. 6. The meeting was chaired by both Treasury Secretary Steven Mnuchin and World Bank President David Malpass, and it led to the planning of four meetings to be held among the ministers of water resources of the three countries in order to conclude an agreement by Jan. 15, 2020, on the filling and operation of the Grand Ethiopian Renaissance Dam, or GERD.

Two more meetings are to be held on Dec. 9 and Jan. 13 in Washington to assess the negotiations process.

Following years of negotiations, Egypt has failed to achieve many of its demands, including the safety requirements related to the dam and the economic, social and environmental studies on the dam's impact. Ethiopia has overlooked the need for such studies and has completed construction before any technical or political talks were accomplished.

The Egyptian Ministry of Water Resources announced Oct. 5 that talks with Sudan and Ethiopia over the operation of GERD had reached a deadlock after Ethiopia rejected Egypt's proposal on ways to reduce the dam's impact on Egypt's Nile water quota.

Following the US-sponsored meeting, the Egyptian Ministry of Foreign Affairs said in a press statement that the road map is “a positive result that will control the course of negotiations,” and stressed, “Egypt is seeking a balanced agreement that will enable Ethiopia to generate electricity without compromising Egypt's water interests. The Nile water is an existential issue for Egypt.”

In an Oct. 29 press conference with his German counterpart Heikou Maas, Minister of Foreign Affairs Sameh Shoukry said Washington agreed to host a meeting between Egypt, Sudan and Ethiopia on Nov. 6 to “break the deadlock on the Renaissance Dam.”

He said ​​that international mediation “proves Egypt’s good intentions and affirms its efforts to cooperate and resolve all outstanding issues through diplomatic and peaceful channels.”

A government official familiar with the Nile Basin file told Al-Monitor on condition of anonymity, “Despite the strong Ethiopian rejection of any international intervention, the Egyptian diplomacy managed to return to the track of negotiations with international sponsorship through several moves.”

He stressed, “Egypt still has a lot of suggestions and technical ideas that can help settle the dilemma over the effects of GERD on the interests of Egypt and the Egyptian technical delegation has several scenarios developed by local Egyptian experts with the help of international expertise in the field of dam construction. All of these scenarios have been reviewed in a way that benefits Ethiopia, protects the Egyptian water quota and ensures safe flow rates of the Blue Nile water to the High Dam Lake.”

Egypt currently receives about 40 billion cubic meters from the Blue Nile, but when Ethiopia starts filling the dam, it will affect this quantity.

“Whenever the Egyptian delegation raises conditions or obligations, the Ethiopians rush to reject them,” he added, lamenting, “We have no guarantees that Ethiopia will change its hard-line position.”

Asked to comment on the US sponsorship of the negotiations, the source said, “The presence of an international party, especially the US, will expose each country’s positions to the international community, and this might lead to some Ethiopian flexibility away from the old intransigence that prevented any progress in the negotiation process.”

The Egyptian Foreign Ministry has held several meetings and issued statements about the frustrating negotiation process.

During an Oct. 13 meeting between Deputy Minister of Foreign Affairs Hamdi Loza and the ambassadors from China, Italy and Germany, Loza expressed Cairo’s discontent with Chinese, Italian and German companies’ ongoing activity at the Renaissance Dam site. Work should be halted, he said, because negotiations have stumbled and no studies on the economic, social and environmental effects of the dam have been conducted.

Hassan Abu Taleb, a member of the advisory board of the Egyptian Center for Strategic Studies, told Al-Monitor, “International escalation and seeking the sponsorship of other international powers would help place pressure on all parties to understand and take into account the interests of others.”

He went on, “There are other paths that Egypt can work on, such as submitting a detailed memorandum to the Security Council and the African Union Peace and Security Council. It can also get an advisory opinion from the International Court of Justice, but it is currently hoping the Ethiopian side will show some flexibility during the first meeting of the Tripartite Technical Committee, which is supposed to resume its work shortly, as agreed during the talks between Egyptian President Abdel Fattah al-Sisi and Ethiopian Prime Minister Abiy Ahmed.”

Sisi met with Ahmed on the sidelines of the Oct. 24 Russia-Africa summit as part of Egypt's diplomatic efforts to mitigate the effects of the Grand Ethiopian Renaissance Dam.

During the meeting, the sides agreed that the independent technical committee would resume work immediately to finalize the regulations for filling and operating the dam.

Abu Taleb explained that Ethiopia “rejects the historical principles and agreements on the Nile River on the grounds that they were signed during the colonial period," adding, "Ethiopia also refuses to sign any agreement that forces it to commit to a specific measure in the management of the Nile water with Egypt.”

Hani Raslan, head of Sudan and Nile Basin research at Al-Ahram Center for Political and Strategic Studies, told Al-Monitor, “The recent calls for international mediation are in the interest of Egypt,” which he described as having been patient and fair over the last four years.

“Some believe Egypt is moving slowly but it is actually laying the necessary foundations while trying to gain international support.”

Raslan added, “We did not expect the Sisi-Ahmed meeting to reach radical solutions, especially considering the latter's negative statements in parliament one day ahead of his meeting with Sisi. Add to this the mounting unrest in Ethiopia, which is leading Ahmed to use the Renaissance Dam as a tool for popular mobilization.”

However, he stressed, “The US mediation specifically will embarrass the Ethiopian side. Should Ethiopia refuse such mediation, it would prove its intransigence to the world and prove that it does indeed pose a threat to peace and security in the region at a time when the Ethiopian prime minister has been recently awarded the Nobel Peace Prize.”