The hawkish Foundation for Defense of Democracies, an influential Washington think tank, has registered to lobby US lawmakers. 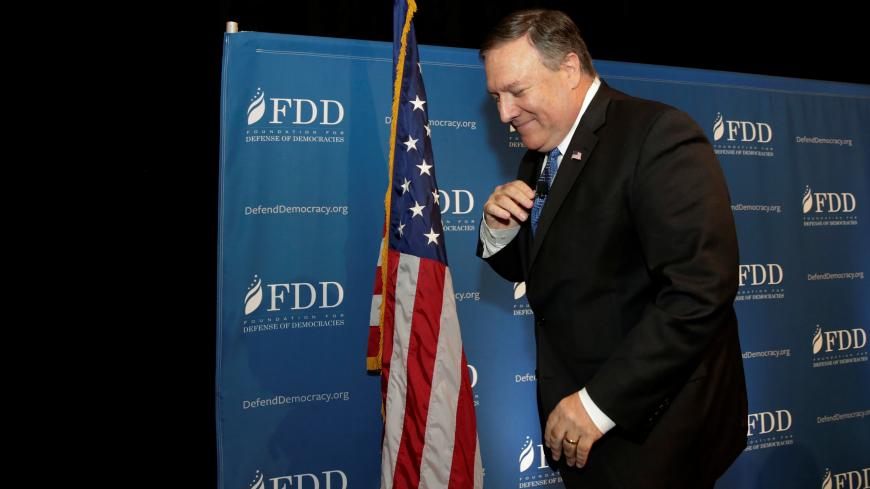 Secretary of State Mike Pompeo, who was director of the CIA at the time, leaves the FDD National Security Summit in Washington, US, Oct. 19, 2017. - Reuters/Yuri Gripas

The Foundation for Defense of Democracies, the hawkish Washington think tank that advocates for a hard line on Iran, formally registered to lobby US policymakers today.

FDD Action, a nonprofit that the think tank’s executives set up in late 2018, registered under the domestic Lobbying Disclosure Act, describing itself as a group engaged in “issue advocacy on US national security and foreign policy.” Tyler Stapleton, FDD’s deputy director of congressional relations, is the sole registered lobbyist on the account, which is effective Oct. 1.

FDD Action will lobby on several pieces of legislation, including efforts to give Syrian Kurds and others who partnered with US forces in Syria special immigrant status; prevent US funding from going to areas under the control of Bashar al-Assad via the United Nations; direct the State Department to issue reports on Saudi Arabia’s school textbooks and whether they’re encouraging violence; and boost cooperation between the United States and Israel to counter “killer drones.” The group also disclosed it would lobby on no fewer than four bills that would impose sanctions on Turkey following Ankara’s incursion into northeast Syria to roll back US-backed Kurdish militants.

The registration brings more transparency to the influence operations of an organization that stands out among Washington think tanks for its advocacy on its preferred policy positions, notably regarding sanctions on Iran. FDD did not respond to a request for comment about the reason for the filing.

FDD experts, including its CEO Mark Dubowitz, who also heads its Iran team, are fixtures on Capitol Hill and in Washington media, advocating against the 2015 nuclear deal with Iran and later for its replacement. According to its website, FDD experts testified before Congress 28 times in 2017.

Tehran blacklisted FDD and Dubowitz in August, accusing them of “economic terrorism” for its hawkish advocacy role and constant criticism of Iran for its “nefarious activities” in the region and human rights abuses. Top US officials have acknowledged the influential role of the group, which was formed shortly after the terrorist attacks of Sept. 11, after originally being envisioned as a pro-Israel advocacy group.

“We have drawn heavily on the scholarship and analysis of FDD,” then-national security adviser H.R. McMaster said at an FDD event in October 2017 (McMaster currently serves as the chairman of the board of advisers of FDD’s Center on Military and Political Power).

The group is close to Israel and Gulf Arab states. Last year, FDD spent nearly $6,000 to take a congressional staffer on a trip to Israel that included a meeting with Hagai Tzuriel, the head of Israel’s intelligence ministry. And in 2017, The Intercept reported that Dubowitz coordinated with the United Arab Emirates’ ambassador to the US, Yousef al-Otaiba, to target Emirati companies thinking about investing in Iran.

In recent weeks, FDD has aimed its ire at Turkey, exposing a rift among hawks between critics and defenders of President Donald Trump’s efforts to repair relations with President Recep Tayyip Erdogan and hand over a greater role in the region to Turkey. Unconvinced, Dubowitz tweeted that “Erdogan’s Islamic Republic in Turkey is like [Supreme Leader Ali] Khamenei’s Islamic Republic in Iran.”