Top military officials say US troops departing northern Syria have the ability to defend themselves and adjust to a fluid situation. 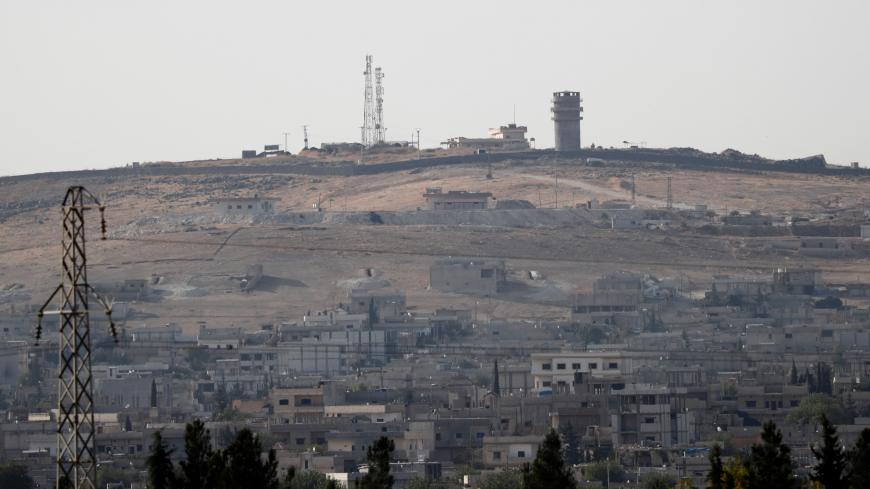 An abandoned US observation post is seen from the Turkish border town of Suruc, in Sanliurfa province, Turkey, Oct. 14, 2019. - REUTERS/Murad Sezer

Top military officials insisted today that US troops departing northern Syria have the ability to defend themselves as Turkish forces continued to probe deeper into the war-torn country on the sixth day of an offensive allowed by President Donald Trump.

Calling the safety of US troops the Pentagon’s top priority, Army Chief of Staff Gen. James McConville said the 1,000 American troops are capable of handling themselves on the complex battlefield that Russia and pro-Bashar al-Assad forces appeared set to enter after cutting a deal with US-backed Kurds.

“We’re watching, we’re reacting,” McConville said in response to a question from Al-Monitor at the Army’s annual conference. “What the force is doing on the ground, and they’re very, very capable forces is they’re reacting to the changing situation on the ground.”

US troops have the ability to respond to Turkey and Turkish proxies “only if they are fired upon,” an administration official told Al-Monitor today. The official said Sunday that the US military’s lines of communication and resupply may become more difficult to maintain as the battlefield gets more complex in the coming days.

Ryan McCarthy, the Army secretary, confirmed that the Pentagon had “adjusted the troop disposition” in northern Syria. “We’re trying to make sure we don’t have a challenge with a NATO ally,” he said.

Indeed, other NATO allies also appeared ready to depart the campaign to counter the Islamic State. The Telegraph reported today that British special forces were preparing to leave Syria.

One former US military official did not appear all that concerned about the conditions on the ground for US troops in Syria. “I do not worry about our lines of communication to get our people out,” Thomas Spoehr, a retired US Army lieutenant general who oversaw the withdrawal of American forces from Iraq in 2011, told Al-Monitor in an email. “The Turkish push south should not change this dimension, and Syrian/Russian pressure from the west has been a constant since US forces arrived in country.”

Spoehr, who now leads the conservative Heritage Foundation’s Center for National Defense, said most US forces are likely to come out of the northeast by helicopter at night, calling that method “the lowest-risk form of exfiltration in semi-hostile territory.”

Meanwhile, reports indicated the situation on the ground in Syria had continued to deteriorate today. Turkish President Recep Tayyip Erdogan signaled that his forces would assault the Kurdish-held city of Manbij, where Turkey and the United States once held joint patrols.

The administration official who spoke to Al-Monitor said US troops face a “huge risk” in the city. Turkey also has been releasing “prisoners from unguarded prisons,” the official said, and blaming the US-backed Syrian Democratic Forces.

The Pentagon has always faced a complex battlefield in Syria. For the last few years, US forces deployed to the contested city have dealt with fire from Turkish-backed forces, but officers who served in the area said they had limited ability to respond.

“Every now and then we would get some small direct fire and some limited massed indirect fire, but our orders were always to ensure that they knew that they were shooting at Americans,” said John Woodward, a retired colonel who commanded an Army brigade in Manbij in 2017. “Our instructions were not to establish contact with the Turkish army.”

But even as the National Security Council met this morning to assess possible sanctions on the Turkish economy over the dayslong offensive, Trump faced pushback within his own White House over the decision to pull out of Syria. An administration official told Al-Monitor that the State and Defense Departments as well as the NSC had reacted with “open hostility” to Trump’s decision.

“Heavy pushback,” said the administration official, speaking not for attribution. “But [Trump] is just digging in.”

Woodward said he and other colleagues were “mad and embarrassed” by Trump’s decision. “The embarrassment is that you work so hard to build trust on the ground, and once you have that trust and shared hardship, to know that you’ve left them, that stings.”

Army leaders recognized the protests from officers over Trump’s decision to abandon the security mechanism in northern Syria and allow a Turkish incursion. But they said they expect US troops in Syria to carry out the president’s order to leave.

“Ultimately, when national polities’ decisions are made,” said McCarthy. “we salute and move out.”