The United States is getting scores of Syrian locals ready to deal with explosives left behind by the Islamic State. 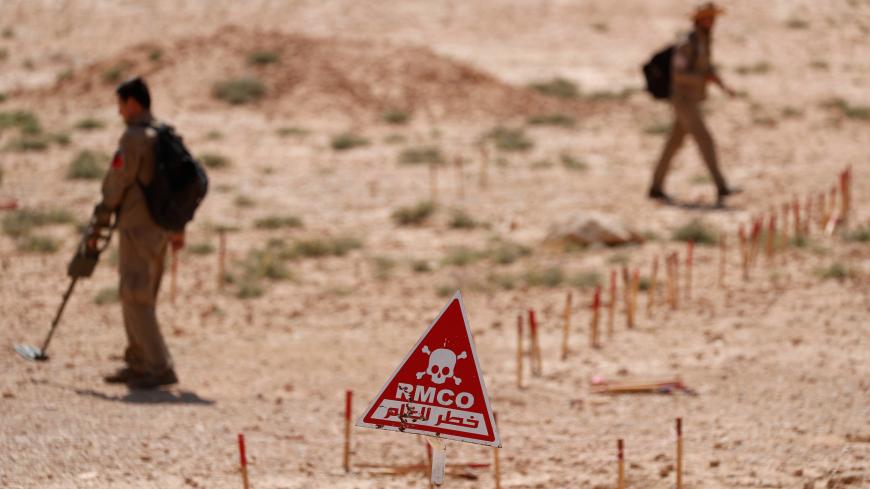 The United States is getting scores of Syrian locals ready to deal with explosives left behind by a rapidly disintegrating Islamic State (IS).

Over the summer, a State Department-led program trained 120 local Syrians to remove and destroy mines in the northern town of Manbij, where a small number of US troops are deployed, Al-Monitor has learned.

The pilot program did not draw recruits from US-trained units that are fighting to root out nearly 2,000 IS fighters left in Syria. Instead, the program picked up civilians without combat experience and coached them from the ground up.

“We are recruiting and training locals in their areas, from Raqqa, from Manbij, to help clear the contamination that is in their own cities,” Stanley Brown, the director of the State Department’s Office of Weapons Removal and Abatement, told Al-Monitor. “They’re Syrian locals that we had to take from a stage that had never worked with demining to doing clearance operations.”

US officials vetted citizens from Manbij, Raqqa and Tabqah for the six-week course. The program is part of a push to secure areas liberated from IS that are not held by Syrian servicemen loyal to Bashar al-Assad, Iran-backed forces or Russian troops.

The blueprint for the Syria effort comes from a strategy developed in Iraq to get forces ready to conduct stabilization missions on their own. With support from the Danish Demining Group, the Syrian effort to clear roads, bridges, schools and other critical infrastructure has already cost the State Department $16 million in fiscal years 2015 and 2016. The US government put $38 million toward destroying conventional weapons in Syria for fiscal year 2017.

“We are committed to stabilization, and that word is very important. This is not reconstruction; it’s not nation building. Stabilization is demining,” Brett McGurk, the State Department’s special envoy for the anti-IS fight, told reporters in August. “That means setting the conditions for people to return to their homes. [IS] leaves land mines everywhere so that people can’t return. We are committed to help to do all we can by training locals to help demine critical infrastructure sites in critical places to allow people to come home.”

The Pentagon has committed $500 million to train and equip Syrian fighters over the next year; US officials are also working to develop funds to get US allies around the world to contribute to the stabilization mission. In August, McGurk said a new donor consortium would allow the US-backed coalition in Syria to match up stabilization projects to specific partner countries.

Since the Pentagon first sent troops to Syria to deal with IS in 2015, the 73-nation, US-led coalition has said it has helped clear improvised explosive devices, bombs and mines from more than 55 schools, 20 health centers and 10 water pumping stations.

Yet the scale and scope of the work remains overwhelming, even as the Donald Trump administration hones its focus on demining economically vital areas. In Tabqa, deminers found dozens of schools wired to explode before the school year started in September, and McGurk said the coalition has identified 400 critical infrastructure sites in Raqqa for demining.

The Pentagon is also instructing US-backed Syrian rebel groups, such as the Raqqa Internal Security Force and the Syrian Democratic Forces, on tactics to recognize and avoid improvised explosive devices that encircle former IS strongholds.

It’s not immediately clear where the 120 new Syrian trainees, now ready to conduct demining operations, will be deployed. US advisers working with locals don’t enjoy the support of the Assad government, which has repeatedly called the 2,000-troop American presence in the country illegitimate.

A recent Pentagon inspector general report cited Syria’s complex politics in the development of local institutions and delays of stabilization materials coming into the country from Iraq, Turkey and Jordan.

“The challenge of the support is not as much about political or legal limitations as much as it is we don’t have the same entities on the ground. We don’t have the presence of a robust UN capability or the support of a central government, or the institutions associated with those government-related functions that would help us be able to execute the program,” Brown told Al-Monitor. “In regards to Syria, the programs are just more difficult because it’s much more austere, in an environment where there are less organizations to collaborate with to make the program successful.”

But State Department officials have not made a long-term commitment to the pilot program. It’s also not clear if the Syrian trainees could be protected in case of hostilities, as the Trump administration has backed off calling for Assad’s ouster until the next scheduled Syrian presidential election in 2021.

"We don’t have a clear path of how we support this force, and with our year-to-year budget, we just don’t know what that looks like yet,” Brown said.

“Everyone wants to know when we’ll clear Raqqa. We don’t have a number because we know the level of contamination is higher than we thought. We don’t have timelines.”