The Donald Trump administration faces significant hurdles getting the centerpiece of its reconstruction efforts back on track. 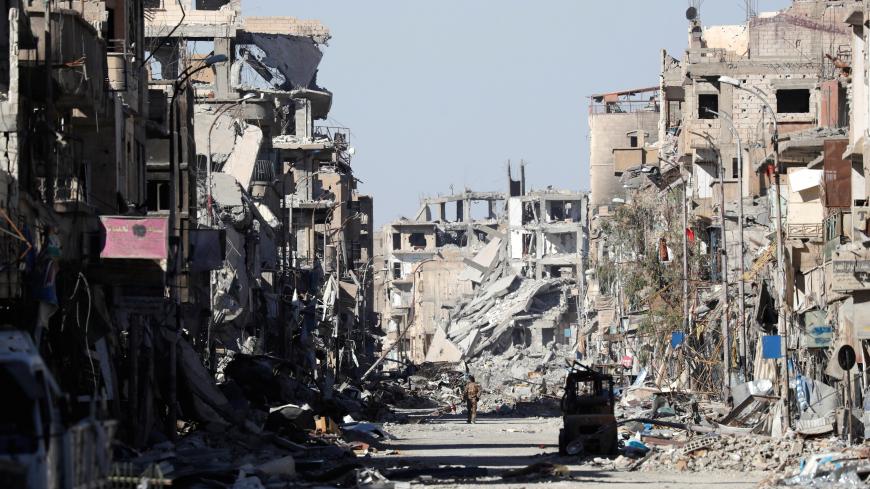 A fighter from the Syrian Democratic Forces stands amidst the ruins of buildings near Clock Square in Raqqa, Syria, Oct. 18, 2017. - REUTERS/Erik De Castro

Nine months after US troops helped liberate the Islamic State’s former capital of Raqqa, the city's lethal mound of unexploded ordnance is challenging the Donald Trump administration’s hopes for a quick exit out of Syria.

The State Department has trumpeted the Raqqa effort as an opportunity to empower local partners to begin conducting a yearslong cleanup on their own. But as Trump publicly seeks to draw down the 2,000 US troops in the war-torn country, some demining experts worry the rehabilitation effort won’t be able to get Syrian trainees up to speed to clean up the booby traps, car bombs and mines left behind by the retreating jihadis.

Officially liberated last September by the US-backed Syrian Democratic Forces, Raqqa is home to a small contingent of advisers hired by the California-based company Tetra Tech. The firm has begun training locals to remove explosives, but some doubt how much those experts are doing to fix the rubble-laden city.

“There’s a question of how much clearance they’re doing, or whether they’re hanging out and doing some mentoring,” said Brian Castner, a senior crisis adviser at Amnesty International who served three tours as an Air Force ordnance disposal officer in Iraq. “Raqqa is the wrong place to be learning. That’s not a learning environment, that’s an operating at the top of your game environment.”

But US officials indicate that the demining effort is needed to clear critical sites before infrastructure can get up and running again. Speaking at a State Department press conference in December, Stan Brown, the director of the agency’s Office of Weapons Removal and Abatement, said that contractors had trained 120 locals in Raqqa in some elements of demining. “They’re clearing critical infrastructure to enable the follow-on humanitarian assistance to flow into the area to provide a level of stabilization so civil society can come back up and begin to run normally again,” he said.

Tetra Tech referred questions about the contract to the State Department. A State Department official, speaking on condition of anonymity, told Al-Monitor that Syrian deminers had cleared two dozen Raqqa schools of mines, allowing 15,000 children to return to class.

The Trump administration’s fiscal year 2019 budget includes $130 million to stabilize areas liberated from the Islamic State by restoring schools and drinking water and getting sanitation and the electrical grid back online. The official also said that 11 water pumps provide clean water to Raqqa.

Yet aid experts question whether Raqqa, a bellwether of the US-led effort to revitalize northeastern Syria, is getting enough support to remove remaining bombs and mines.

Castner told Al-Monitor that the Raqqa Civil Council, one of the Syrian authorities conducting the city’s cleanup, has asked US officials for armored bulldozers to clear explosive-laden rubble and remove bodies ensnared in the city’s ruins, but it has yet to receive the vehicles. Instead, locals are resorting to welding sheet and scrap metal to bulldozers, potentially putting responders at greater risk of getting hurt or dying in a blast.

The State Department did not immediately respond to a request for comment regarding the bulldozers. According to a recent report in The Guardian, the demining nonprofit HALO Trust, which holds contracts in Syria, Iraq and Yemen, is using reinforced rock crushers used in stone quarrying to fill the gap.

Adding to the on-the-ground difficulties, Tetra Tech’s efforts to clear mines in Raqqa stalled between mid-April and mid-May, two sources told Al-Monitor. US officials said work has resumed after the company patched up a brief funding gap.

“Tetra Tech temporarily paused clearance operations in and around Raqqa city due to a brief funding gap,” a State Department official told Al-Monitor. “Other clearance implementers and local security forces continued to clear explosive hazards during that time.”

“Would you want to sit in a tent outside of your destroyed home when there’s a [bomb] inside it for a month? It’s untenable,” Castner said. “We don’t like to wait an hour to get on a plane. People don’t want to wait, they need work.”

Across the Trump administration, Pentagon and State Department officials insist that the US role in Syria is meant to remain limited to denying the Islamic State the ability to return to the northeast, which prompted the first deployment of American troops to the country in 2015. But US experts following the conflict worry that the White House isn’t doing enough to coordinate the reconstruction effort and will have little progress to show if Trump decides to quickly pull out US troops.

“Even the bare bones definition of rehabilitation would say that demining is the first step,” said Nick Heras, a Middle East fellow at the Center for a New American Security. “This is supposed to be the showroom model. What do they have to show?”