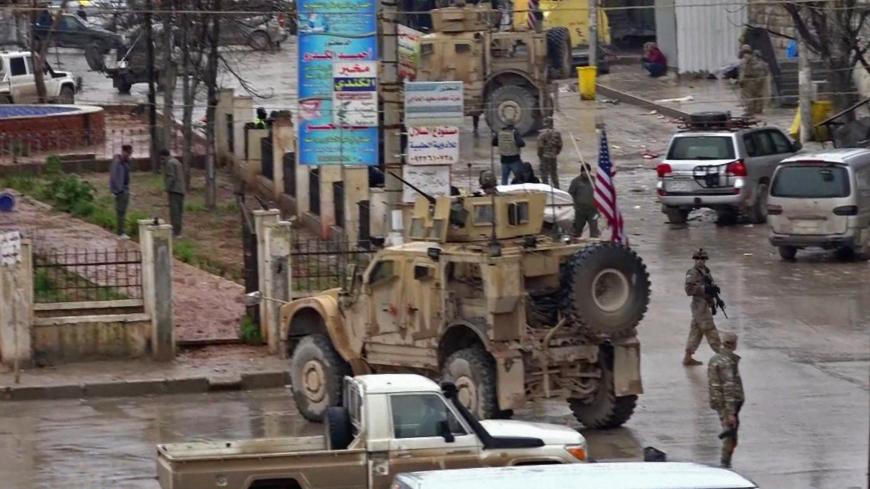 An image grab taken from a video obtained by AFPTV on Jan. 16, 2019, shows US troops gathered at the scene of a suicide attack in the northern Syrian town of Manbij. - AFP/Getty Images

The death of several Americans today in a suicide attack in the Kurdish-held Syrian city of Manbij has thrown another wrench into US plans for a rapid withdrawal from Syria. The Islamic State has claimed responsibility for the attack weeks after President Donald Trump touted the group’s alleged defeat as the impetus for his decision to pull US troops out of Syria.

Why it matters: News of the attack further complicates debate inside the Trump administration on the timing for plans to withdraw 2,200 US troops from Syria. In a brief statement, White House spokeswoman Sarah Sanders said, “The President has been fully briefed and we will continue to monitor the ongoing situation in Syria.”

Questions abound: The fallout from the attack, which killed two service members, a Department of Defense civilian and a Pentagon contractor, remains in question. Meanwhile, Turkish media are reporting that a suicide bomber targeted a meeting of US and French troops with Kurdish militants at a Manbij restaurant. The Britain-based Syrian Observatory for Human Rights says 16 people died in the blast, including nine civilians.

All eyes on Trump …: Already dealing with the fallout from a weeks-long government shutdown at home, the US president now has to contend with new facts on the ground in Syria. Trump has pledged to cut down the United States' overseas troop presence, but his Syria policy has drawn fire from the Pentagon and State Department as well as from allies in Congress including Sen. Lindsey Graham, R-S.C. Trump previously walked back his 30-day deadline for the pullout, but with the mission having little public support, today’s attack may cause Trump to once again press for a speedy retreat.

… and Erdogan: The attack comes as Turkey-backed Syrian rebels are chomping at the bit to launch a full-scale assault to take back Manbij from the US-backed Syrian Kurdish People’s Protection Units, which Ankara considers terrorists. Today’s attack right on Turkey’s doorstep may be all the justification Turkish President Recep Tayyip Erdogan needs to act, especially if he gets a tacit green light from a US president eager to disengage from the chaotic conflict.

US residual presence: Even if Trump pivots back toward quickly pulling out of Syria, it doesn’t mean US forces will completely leave the country. As news of the blast began breaking this morning, Army Chief of Staff Mark Milley, tapped by Trump last year to be the Pentagon’s top military officer, indicated today that the United States still had a small pocket of Islamic State fighters left to finish off. “We’ve got the remnants, a relatively small amount of remnants of [IS] bottled up in a small geographic area and we are determined to finish that off and then hand the battle off to our indigenous partners," Milley said at an army association breakfast.

IS resurgence: IS has claimed responsibility for the deadly attack but did not make clear whether it was designed to hasten a US withdrawal from the country. The attack will inevitably raise questions about how strong the group remains, and could create public pressure for European countries including France to withdraw if their forces died in the attack. That could give IS some breathing room to regroup.

The White House is showing no inclination to review its analysis of the group’s demise. "[IS] has been defeated," Vice President Mike Pence insisted today during a visit to the State Department during which he touted a list of the Trump administration's perceived foreign policy accomplishments.

What’s next: Expect Trump’s Twitter feed to light up at some point soon with condolences for the fallen and next steps in Syria. If Trump pushes for a quick US withdrawal, expect pushback from hawkish Republicans. "To those who lost their lives today in Syria, you were defending America, in my view,” Graham said at an unrelated Senate hearing. “I hope the president will look long and hard at what we’re doing in Syria.”

Know more: Al-Monitor Pentagon correspondent Jack Detsch first reported on Defense Department concerns about a possible IS resurgence across Syria and Iraq back in August. And make sure to read Kadri Gursel on the limitations of Turkey’s ability to take over from the United States in northern Syria.

Update: Jan. 16, 2019. This post has been updated with a US casualty count from the Department of Defense.