The friendship between the Turkish and American presidents thrives despite all ideological differences, so much so that elites of Turkey's ruling party view the impeachment inquiry as an act of the "deep state" or even a "coup" against Trump. 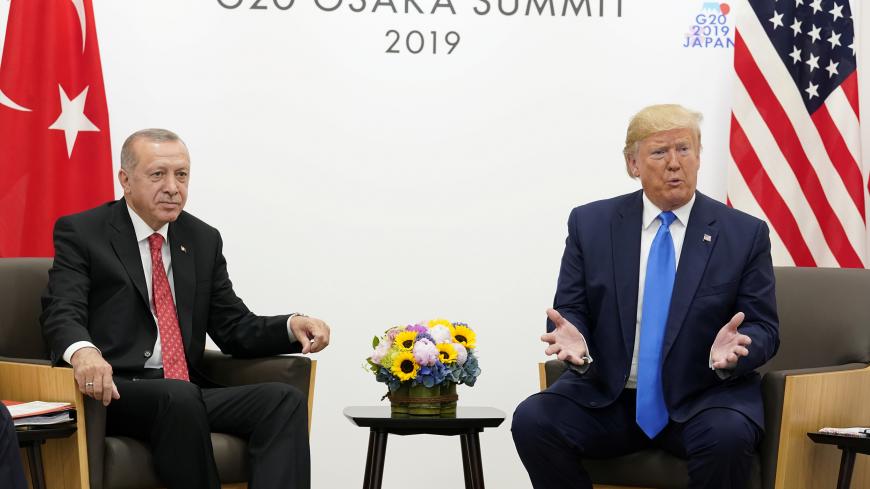 Since US Speaker of the House of Representatives Nancy Pelosi introduced the impeachment inquiry against President Donald Trump, I have been receiving agitated calls from Ankara. From the first day on, Justice and Development Party (AKP) elites have been referring to the impeachment inquiry against Trump as an act of the deep state or the CIA — even going so far as to call it a coup. So Trump’s October tweets echoing the same lines were not surprising to those of us who are familiar with the AKP's rhetoric.

The Trump administration has extensively supported the Kurds in Syria — or at least it did until this month. Trump declared Jerusalem the capital of Israel, and he is not known for his embrace of Palestine or other Muslim communities.

Despite rough times between Washington and Ankara, Erdogan and Trump have referred to each other as “my friend” or “my close friend” repeatedly since Trump’s election in 2016. Now, as the possibility of an impeachment process looms in the background of the Trump administration, AKP’s bigwigs are worried.

A quick scan of the Turkish media since the impeachment inquiry began shows there are informational pieces from state-run TRT television explaining the procedure of the impeachment process. The other news in pro-government outlets is basically about Trump’s words and tweets. For example, CNN Turk introduced the issue with the headline “Neither the first nor the last” and detailed the impeachment histories of four other US presidents. The analysis concluded that given the Republican majority in the Senate, it was unlikely that Trump would be removed from office. Washington bureau chief for Anadolu Agency Hakan Copur’s tweet telling his readers that one needs to follow right-wing and conservative media outlets as well to understand the impeachment process sums up the focus of the Turkish media so far. The most common argument the AKP base supports is that Trump is now a victim and will win easily in 2020.

That is the underlying tone in most pro-government media. Their focus on Trump has shifted to the phone conversation he had with Erdogan Oct. 6 and the invitation he extended to the Turkish president to visit Washington in November. This conversation is seen as yet another personal success for Erdogan in Syria to start an operation tentatively named Operation Springs of Peace.

Burak Bilgehan Ozpek, associate professor of international relations at TOBB University of Economics and Technology in Ankara and leader of the Daktilo1984 movement — one of the most influential liberal movements in academia and politics over the last few years in Turkey — analyzed the dilemmas the AKP and its Islamist base face in regard to Trump. Ozpek said, “This dilemma stems from their own impasse about the values they support and administer. Trump isn’t running his foreign policy on the basis of global values. This is an advantage for the AKP because pressure regarding human rights or democratization is considerably less from the Trump administration than it was from the Obama administration. The AKP is happy to deal with a US president who focuses on interests rather than values.”

Indeed, Erdogan’s admiration for Trump can be seen in Erdogan's statement in which he said he would like to “run the country like a corporation.” The self-propelled legacy of Trump as a successful businessman becoming a president is seen as a success story among the AKP elites as well.

On the other side, Ozpek said, was the AKP’s discontent with Trump’s views on political Islam. However, he added, “In the overall balance, as the AKP is concerned about its own regime survival rather than ideological romanticism, it is in their interests to [have] a smooth relationship with Trump." He also entertained the idea that if the AKP were against Turkey's secular establishments under the watchful eye of the military, then it could have openly criticized Trump and all that he symbolizes. “Since the AKP is in power, Trump becomes a savior” for Erdogan even though “he is a nightmare for political Islam,” he said. Ozpek concluded that the AKP’s priority is neither Islamism nor democratic reforms; rather, it is survival. For now, being friends with Trump definitely has benefits.

How AKP elites perceive the process is best explained in the words of a senior bureaucrat from military intelligence with close links to the presidential palace. Asking for anonymity, the bureaucrat told Al-Monitor, “First, we view this as an American version of the 28th of February [coup attempt in Turkey]. At that time, [Felicity Party leader Necmettin] Erbakan was forced to resign because he was against the political system. We viewed that as a [digital] coup, and this is quite similar. The deep state is at work to restrain a leader they could not beat at the ballot box.”

He argued that several conservative groups in Turkey perceive this impeachment inquiry as an attempt to silence anyone who speaks up against the liberal hegemony. Next was his explanation on a personal basis. “Trump and Erdogan have a one-on-one relationship that cuts through the red tape and Congress and all that. Neither one of them gets along with the establishment. But they speak the same language in politics and can promptly resolve their problems over a phone call,” he said.

An Islamist professor of history who works for a state-funded university in Ankara added, “It’s best to let the sleeping dogs lie. We adopted a presidential system, and bragging about legislative powers of oversight isn’t in Erdogan’s benefit.” Any questions about corruption or the potential abuse of power were irrelevant for the AKP elites, who are convinced they were all excuses to topple Trump. The historian joked, “It is not just the devil we know in the case of the Trump-Erdogan relationship, but the devil we love.”

Soli Ozel, professor of political science and international relations at Kadir Has University in Istanbul, provided further insight into the Turkish mindset. “Turkey’s major contribution to the universal political lexicon in recent years was the term 'deep state,'” he said. "Now, in all countries, almost everybody talks about their own deep state. For Turks who know close to nothing about the way the American system works, this Manichean view of Trump versus the deep state is a good formula and shorthand to 'interpret' political developments in the United States.”

He added, “Trump as a president was almost what the doctor ordered since he protected the Turkish corner time and again, most notably after the purchase of the S-400s, and blocked congressional action. So it makes sense that for many supporters of the government, Trump’s presidency is almost like an insurance policy against congressional pressure, sanctions and the like."

Indeed, Ozel’s analysis reflected AKP bureaucrats' words when he said, “Since most of these people do not particularly know or much less care about the fine points of constitutional order … they are convinced of a deep state attack against a fine president. They do not mind the revelations that Trump runs his administration in a corrupt fashion, pursues personal and business interests, and puts his family in positions of responsibility. Since Turkey had gone through a similar episode in late 2013 and Gulenists used corruption allegations and probes to attack then-Prime Minister Erdogan — and those attacks ultimately pulled the base together — they expect the same in the United States. Until now they proved right, as the Mueller probe delivered nothing politically against Trump. But this time is different, and many supporters of the AKP are unable or unwilling to recognize this.”

Yet the AKP's subtle support for Trump was well predicted among careful Turkey experts in Washington as well. Merve Tahiroglu, Turkey's program coordinator at Project on Middle East Democracy in Washington, told Al-Monitor, “Efforts by the House of Representatives to impeach President Trump are unlikely to be welcomed by Turkey’s ruling elites. Erdogan and his AKP have close political ties with the Trump administration, undergirded by both ideological affinity and commercial interests. Erdogan not only banks on his personal rapport with Trump to evade congressional pressure and minimize bilateral tensions. He is also emboldened by an American president who appears to share his contempt for media, dissent and rule of law. While the impeachment process may not hurt Trump’s electoral prospects for 2020, it could erode the administration’s legitimacy abroad and be seen as a rebuke by strongmen like Erdogan who enjoy Trump's support.”