When Turks comment on the "coup" in Brazil, they are actually speaking about Turkey. 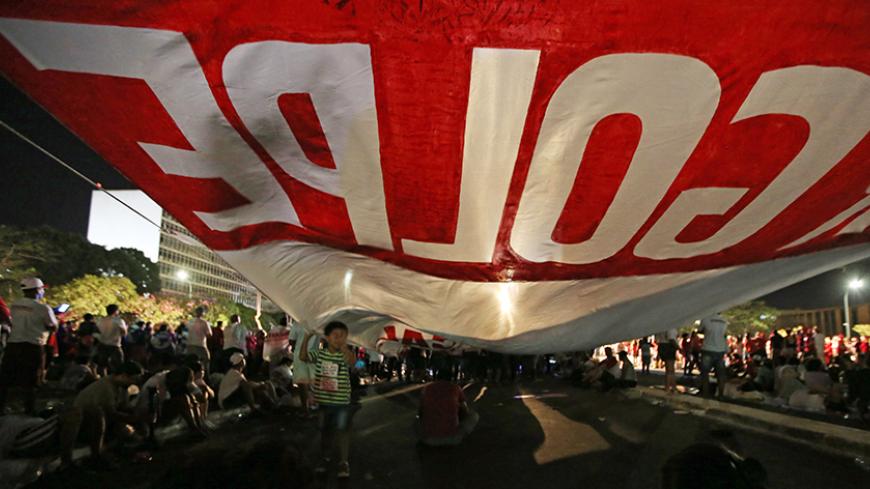 A banner with the word "coup" is extended over supporters of President Dilma Rousseff watching the televised voting in the lower house of Congress over Rousseff's impeachment in Brasilia, Brazil, April 17, 2016. - REUTERS/Paulo Whitaker

On April 17, Brazil’s lower house of Congress passed a vote to impeach President Dilma Rousseff, based on charges that she violated the country’s budgetary laws. In return, both Rousseff and some of her supporters condemned this vote as an attempted “coup" against the nation's democratically elected president.

Interestingly, more than 6,000 miles away, staunch supporters of President Recep Tayyip Erdogan passionately agreed with this interpretation of Brazil’s affairs. Various pundits of the pro-Erdogan media wrote hastened lines about "the coup plot" in Brazil and expressed "democratic solidarity" with the Brazilian president.

For instance, prominent pro-Erdogan columnist Hilal Kaplan wrote that “the coup in Brazil,” which was realized partly by the “big capital owning families,” must be a lesson for Turkey. Another commentator wrote a long piece titled “The coup has won, and Brazil has lost.” And a TV show used all of its airtime to report on “the coup attempt in Brazil and its consequences.” Meanwhile, on Twitter hundreds of comments in Turkish appeared about “the coup” in Brazil and how to defend democracy in the face of such challenges.

The secret powers behind this “coup” was also a part of this narrative. Journalist Ardan Zenturk suggested that ”deep America organized a 'white coup' in Brazil," and that the CIA and philanthropist George Soros must have been involved. Another writer, in an article in the pro-Erdogan daily Milat, also regarded “the CIA” as the real culprit of the “coup” in Brazil, only to warn, “The CIA is cooking up a coup in Turkey.”

Meanwhile, other Turks, who are unmistakably critical of Erdogan, did not condemn but rather welcomed the news from Brazil. What happened on the other side of the world, for them, was not a “coup” but rather the working of the rule of law: A corrupt president was rightly facing justice, and that should set a good example for the world.

The problem with most of these comments from Turkey is that they actually speak less about Brazil — about which they know little except perhaps that the country is famous for soccer and carnival — but more about Turkey. For, since December 2013, Turkey has had to deal with two controversial corruption investigations against top government figures, which have been condemned by the pro-Justice and Development Party (AKP) camp as a “coup attempt,” while supported by the anti-AKP camp as a justified legal action against a truly corrupt system. So when these two camps look at Brazil, they only see a reflection of their own positions inside Turkey — positions that have never engaged in a sensible discussion with each other, but rather only condemned and demonized one another.

But what is really happening in Brazil? Well, not exactly a “coup,” in my view. A recent article in The Economist put it well: “A coup involves the seizure of power through the unconstitutional use or threat of force by a small group; that is not the case in Brazil.” The case rather is a legal process that is compatible with Brazil’s constitutional and legal system. Of course, this does not mean those who want to see Rousseff gone do not have their own political motives, and perhaps cynical ones. But that does not make the impeachment itself an illegitimate takeover. (Case in point: In 1974, there were probably many people in the United States who had political reasons to be happy to see the impeachment of President Richard Nixon; but that did not make the impeachment a “coup.")

Back in Turkey, what had really happened in December 2013, when a group of prosecutors and policemen arrested dozens of powerful AKP figures, including the sons of two key ministers? Was it a “coup attempt,” as the pro-AKP camp has been saying since then?

It is complicated, because there are many reasons to believe that those prosecutors and policemen were affiliated with the Gulen Movement, which was then at a political war with the AKP. So, it was not a normal legal process — but only with regards to its motives. Therefore, in an article for Al-Monitor in July 2014, I wrote, “If corruption does exist and if the investigators are driven not by a pure passion for justice but also some ideological/religious/factional motives, one can still not call it a 'coup.' One can call it 'a corruption probe with covert political motives.'”

But of course such nuances were uninteresting to most people in Turkey with its zealously polarized political scene, especially to Erdogan supporters. Hence, since early 2014, the latter have established the narrative that not only the corruption investigations of December 2013 but any legal procedure that conflicts with the government — let alone tries to bring any constraint on it — is a “coup attempt.” This rhetoric got so much out of hand that even Turkey’s constitutional court was recently condemned for “staging a judiciary coup” by merely releasing two journalists who Erdogan wanted to see in jail.

This trend partly explains why Turkey is a perfect “illiberal democracy” today, where ballots rule, but rule of law and freedom of speech shrinks. Notably, there are some striking parallels between this trend in Turkey and other illiberal democracies (and “partly free” countries) of Latin America, such as Bolivia under Evo Morales. Morales, just like Erdogan, claims to represent “the people” against the old elite, who do not count among “the people.” And just like Erdogan, Morales believes “all courts should be an appendage of the executive.”

Brazil, to its credit, is a more liberal democracy, but it also has features very similar to Turkey: a turbulent political past marked by military rule, a developing economy that comes with inequality and corruption, and very low levels of interpersonal trust, leading to a suspicious and combative political culture. Such are the parallels that Turks need to see between Turkey and Brazil, to understand and hopefully heal the background of what they superficially regard as a “coup.”