All is fair to sustain Erdogan’s reign

In a tightly controlled media environment where any critical voice is promptly labeled as terrorist, how did a notorious PKK member on the most wanted list appear as a guest on Turkish state TV? 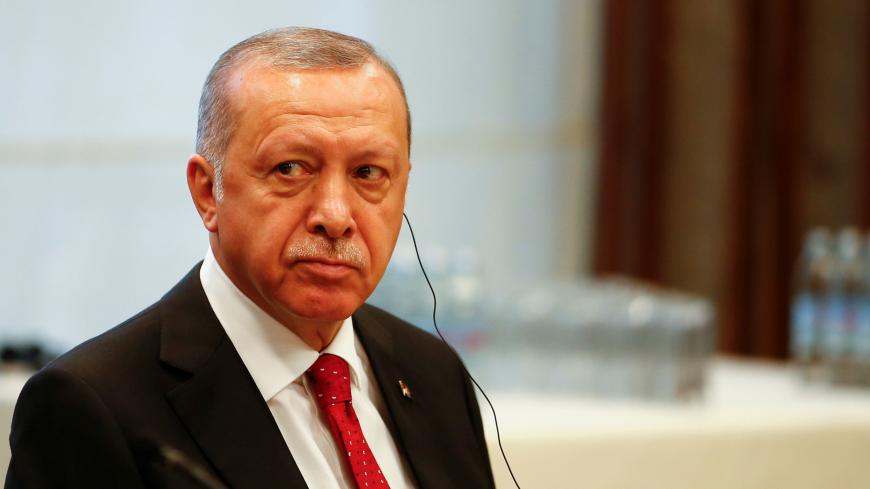 The Washington Post published July 3 a piece penned by one of the founding members of the outlawed Kurdistan Workers Party (PKK). In the article, Cemil Bayik explained the Kurdish yearning for peace. Within hours, presidential spokesman Ibrahim Kalin provided a searing written denunciation. Kalin criticized the newspaper, writing, “The Washington Post is openly engaged in terrorist propaganda by providing space for a terrorist on their pages.”

Kalin continued that both the United States and the European Union has the PKK listed as a terrorist organization and that the United States has issued a reward for the arrest of Bayik. Therefore, Kalin concluded that the Post had acted against US laws.

Opposition members and the public found Kalin’s comments rather odd. This could have been a routine announcement had it not been for a rather controversial event that took place June 21.

Only a few weeks, before the op-ed in the Post, Turkey's state-owned Kurdish-language TV channel TRT Kurdi aired an interview with Osman Ocalan, a former PKK commander and the younger brother of the PKK's jailed leader Abdullah Ocalan, in which he called on the Kurds in Turkey to remain impartial in the Istanbul municipal election rerun on June 23. In the interview, Ocalan said that opposition candidate Ekrem Imamoglu had not made any specific promises to the Kurds.

Omer Turan, a well-known former Justice and Development Party (AKP) supporter, tweeted, “Sabah daily [pro-government newspaper] had described him as one of the important figures of the PKK and informed us that he was on the [Interpol’s] red notice list to be arrested. Now Osman Ocalan’s interview is on state TV channel TRT Kurdi. Is this not a goal scored?”

Although the opposition had little time to make sense of the interview before the election, it became a major issue afterward. The first defense for the incident came from AKP spokesman Omer Celik on June 25.

Celik said, “[Osman Ocalan] wanted to make a statement to TRT Kurdi about the dirty affairs of the organization [PKK] and other issues. Then what was the result? The way the dirty relations are conducted among the organization is revealed.”

The following day, Turkish President Recep Tayyip Erdogan’s comments complicated the issue further. On his way to the G-20 meeting in Japan, Erdogan told the press, “To be honest, I did not know [Osman Ocalan] was on the [Interpol’s] red notice list. But if he applied to TRT Kurdi [for an interview] then my friends at TRT would know that. I trust my friends on this matter.” Erdogan backed TRT saying its management would act taking into account public sensitivities and that they consider public good. They may also think about increasing ratings of the channel. However, the rating chart of the day for Turkish TV channels shows TRT Kurdi was the third from the bottom of a list of tens of channels.

Turkish parliament has seen several heated debates about the interview since that day. One of the most remarkable comments was made by Ozgur Ozel, a senior member of the main opposition Republican People’s Party (CHP), who argued that TRT could not establish connections with a terrorist living abroad and travel there on his own without approval and guidance of the National Intelligence Agency. Ozel said to the AKP ranks, “We know your ability to run the state as a crime organization.”

This has been a sentiment heard all too frequently in Ankara in the last year, and not all criticism came from opposition ranks. Ozlem Zengin a senior member of the AKP, said, “When you look from this angle, from within our party, no one can claim this [the interview] is normal.” Zengin hit the nail on the head standing directly against Erdogan, which is a rare action for AKP members. “TRT cannot hold the mic for anyone who is wanted on the red notice list. Other [private TV] channels could do as they wish, but TRT should not have done this.” Zengin claimed they would be following up on this. Yet this was a hollow promise at best. Because on July 2, the Good Party's proposal to investigate why Osman Ocalan appeared on TRT was refused by a majority of votes from the AKP and their ultranationalist partner, the Nationalist Movement Party.

Opposition members ridiculed the AKP's approach on the matter. The CHP suggested the director of TRT, Ibrahim Eren, should indeed replace Hakan Fidan, Turkey’s national intelligence chief, as Eren is able to find and interview a PKK terrorist on the red notice list.

Osman Ocalan is not a popular figure among ethnic or political groups in Turkey. Indeed, he was “a secret witness” in a series of controversial cases (Balyoz, Ergenekon) against Turkish senior military officers. He had written letters to Turkish intelligence chief Hakan Fidan and Erdogan. And in 2016, pro-government Islamist Akit TV visited Osman Ocalan in Erbil for a two-hour interview. He has appeared rather prominently on Turkish networks, so why was the opposition so upset?

TRT is a taxpayer-funded network and all staff and administrators are state employees who are expected to obey to more stringent rules than those in the private sector. Despite Erdogan’s claim that Osama Ocalan contacted TRT for an interview, several former employees have openly stated the interview process does not work like that. Rather, producers choose who are to be invited on a program.

There is also an ongoing debate about whether or not Osman Ocalan is on the red notice list. Interpol’s list is partially accessible to the public and there is doubt that his name was on the list. Some commentators called for caution as to why Osman Ocalan was not on Turkish police’s arrest list and why the Interior Ministry would not clarify if he is indeed on Interpol’s red notice list. A senior government employee told Al-Monitor, “Osman Ocalan is on Interpol’s list, otherwise of course the government would come out and make a statement.”

A retired general added, “He had fallen out with the PKK ranks and started getting close to certain factions within the state, but still the crimes he had committed against the people have to be prosecuted. We cannot just forget about it now that he has become a mouthpiece for the government.”

Turkish laws on who is a terrorist or who can be charged and imprisoned for supporting terrorist entities is becoming more complex and mind-boggling. Just to put it into perspective, hundreds of academics have been prosecuted for simply signing a declaration supporting peace in 2016.

A well-known case helps display how arbitrary the Turkish justice system has become about defining who is a terrorist. Ayse Celik, a teacher who had called in at a live entertainment program, had said she wished “children wouldn’t die.” Celik was prosecuted for disseminating terror organization propaganda and was jailed.

Burak Bilgehan Ozpek, a professor of international relations at TOBB University of Economics and Technology in Ankara, told Al-Monitor, “Populist parties are prone to disregard the law for their own success.” Ozpek highlighted the AKP’s pragmatic approach to the PKK. “When it was convenient the AKP had started a peace process with the PKK and when it did not work, they engaged in enmity with the organization. The AKP’s priority isn’t war or peace, but rather the survival of its own power.”

According to Ozpek, the AKP prefers the PKK as an interlocutor instead of a Kurdish movement's democratically elected representatives. But Erdogan and his men made it very clear with the Osman Ocalan interview that they prefer the Kurds of Turkey to listen to Abdullah Ocalan.

Erdogan’s team, colloquially known as "the palace," pulls another information management wizardry claiming it is all for higher ratings, but the cost of hosting Ocalan’s brother on state TV piles higher than the benefits.