Ankara’s new military campaign in Syria has raised the specter of fresh trouble for the crisis-hit Turkish economy, but the government hopes to compensate with political gains. 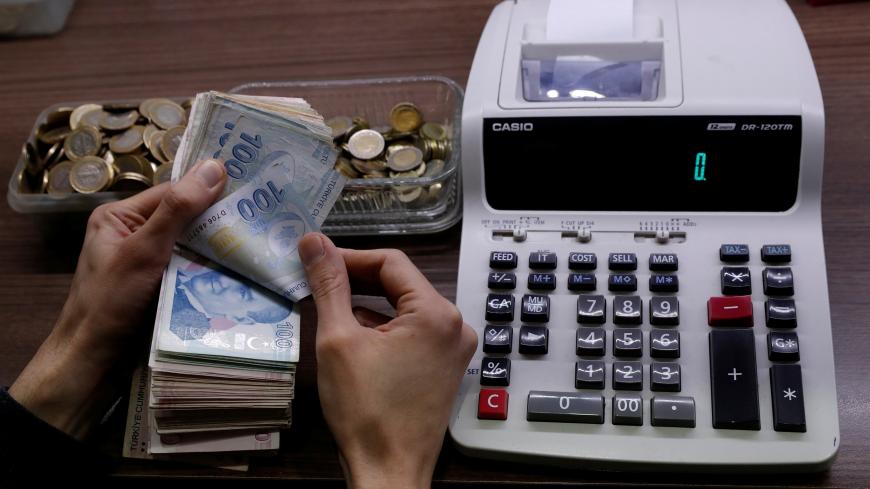 Ankara’s launch of a long-expected military move into Kurdish-held areas in northeastern Syria has worsened the prospects of the already ailing Turkish economy, drawing threats of sanctions by the United States and the European Union (EU), atop the country’s currency woes and swelling debt. The Turkish lira has tumbled and Turkey’s risk premium has shot up since the operation kicked off Oct. 9, triggering fresh financial jitters that seem to weaken newfound hopes of an economic rebound after almost a year of contraction.

The military campaign — launched after a perceived green light from Washington and with the stated aim of creating a safe zone against terrorist threats by Kurdish groups and the Islamic State — creates fresh uncertainties for the economy, threatening to stymie any fledgling prospects of renewed growth. Fears are rife that military expenditures will aggravate the Treasury’s deficits, fuel borrowing needs and eat into funds that could be otherwise used to stimulate the economy.

The EU, Turkey’s top trading partner, is expected to discuss sanctions against Ankara this week after the operation generated harsh reactions from member countries. Showdowns with the EU threaten to bear on Turkey’s foreign trade, borrowing means and investment appeal.

The US administration, too, has raised the specter of "very powerful sanctions" that could cripple the Turkish economy, in addition to a bipartisan sanction move in Congress. According to the outline of a planned bill, shared by Republican Sen. Lindsey Graham on Twitter, the sanctions would target Turkey’s energy and defense sectors and top officials, including President Recep Tayyip Erdogan, as well as foreigners who “provide financial, material or technological support” or engage in any transactions with the Turkish military. The legislation would call also for visa restrictions for Turkish leaders and a report on Erdogan’s wealth.

The economic uncertainty fueled by the operation has pushed saving holders to seek safety in hard currency, with the Turkish lira falling to the region of 5.8-5.9 against the dollar from about 5.6 before the operation. The threat of US sanctions is likely to further weaken the currency. Foreign investment in Turkish stocks could normally help offset such trends, but foreign investors had already lost appetite in the Turkish market before the operation. According to central bank data, the stock exchange saw a net foreign sale of $1.6 billion in the first nine months of the year, barely better than the net foreign sale of $2.3 billion in the same period last year.

In another setback, the drums of war have pushed up Turkey’s risk premium. The country’s credit default swaps — a key risk indicator — climbed close to 400 basis points Oct. 10 from about 350 basis points in the beginning of the month, having decoupled sharply from those of emerging economy peers. Such a high risk premium means that borrowing is becoming harder and costlier for Turkey.

The slump of the lira and the increase of the risk premium are likely to hamper the central bank’s recent shift toward lowering interest rates. The bank’s monetary policy board might be forced to hike back the rates at its Oct. 24 meeting as higher yields are the way to lure foreign money, especially into government bonds.

The slump of the lira would make imports more expensive, which, in turn, would rekindle inflation. The turbulence threatens fresh blows on domestic consumption and investments, which would obviously impede economic growth. The most crucial consequence of such a setback would be an increase in the unemployment rate, which has already reached 14%, with some 4.5 million people looking for jobs.

Another major cause for alarm is the hardening task of rolling over the public debt, which has notably swelled over the past two years as a result of the government’s expansionary policies aimed at cushioning the impact of the economic crisis. According to official figures, the budget deficit reached some 90 billion liras ($15.2 billion) in the first nine months of the year, overshooting the 80.6 billion lira target for the year, set by Treasury and Finance Minister Berat Albayrak not long ago.

Efforts to manage the gaps have resulted in a series of hefty price hikes on public services and commodities, including electricity, gas, road and bridge tolls, trains and postal services. Despite the electorate’s growing resentment, the authorities are reportedly considering more price hikes and some new taxes. Time will show whether the military operation and the nationalist passions it stirs will cool or overshadow the public anger over the hikes.

The amount of domestic debt that will mature in 2020 is estimated at about 300 billion liras ($51 billion) at present. There will be an additional financing gap stemming from the budget, which can be expected to reach some 90 billion liras under the impact of growing military expenditures because of the Syrian campaign. Hence, Ankara will have a domestic debt of up to 400 billion liras ($67.4 billion) to manage next year, even if all external debt is managed through external borrowing. To give a better idea of the gravity of the figure, it amounts to about 60% of the entire domestic debt stock of 692 billion liras ($116.6 billion) at the end of August.

This means that banks will come under pressure to finance the Treasury instead of opening credit channels to the private sector, which needs loans to revive investments and boost production. A competition for funds between the government and the private sector would constitute a serious snag impeding economic growth.

Despite the prospect of further economic gloom, the ruling Justice and Development Party (AKP) hopes that military victories in Syria will make voters forget about price hikes and joblessness. The operation has received support from major opposition parties, except the Kurdish-dominated Peoples’ Democratic Party. Reeling from a big debacle in the local polls earlier this year, the AKP hopes to boost its political fortunes through a “conquest” in Syria. Speculation is already rife that Erdogan might even opt for snap elections, counting on the cross-border venture.