What’s next for Turkey’s economy under 'new system'? 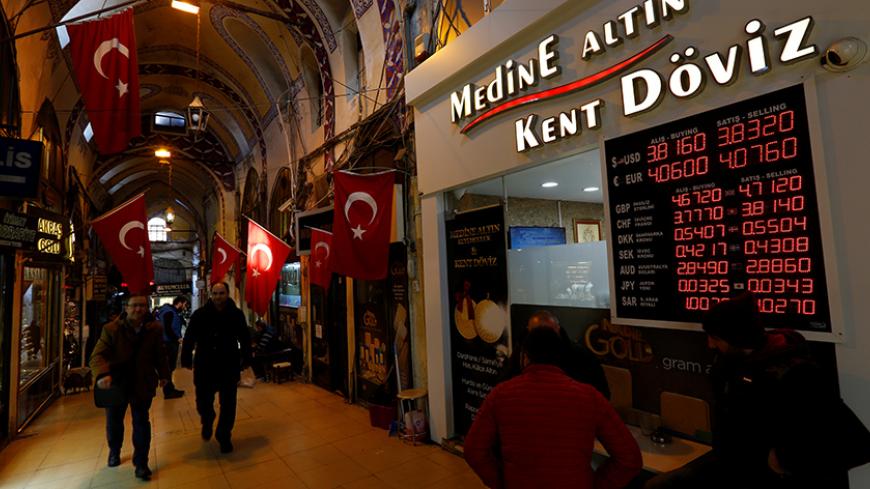 Merchants chat in front of a currency exchange office in the historical Grand Bazaar, Istanbul, Jan. 12, 2017.

The “new system” description is not an exaggeration. Turkey will indeed be in uncharted waters if the 51.4% "yes" vote gets an official validation amid allegations of serious irregularities and vote rigging, as well as the controversy of holding a plebiscite under a state of emergency. In its essence, the new system concentrates power in the hands of a single person, the president, doing away with the principle of separation of powers. Advocates of the shift, who care little about eviscerating democratic norms, argue that the new model will enable a more efficient governance.

The 18-article amendment package abolishes the prime minister’s office and hands its powers — in addition to other powers that diminish the role of parliament and curtail judicial independence — to the president. Because the president is no longer a neutral figure and can simultaneously head a political party, the first general and presidential elections under the new system — slated for November 2019 — will take place simultaneously. The amendments pave the way for a “party judiciary,” enabling the president to shape the High Council of Judges and Prosecutors by both appointing members directly and influencing those nominated by parliament.

In short, the new system deviates largely from the democratic norms of the West, of which Turkey is part of economically and through various multilateral institutions. Can the country maintain stability with such a system? The amendments won approval from only half of the electorate, which could forecast a problem of sustainability. The existing constitution, adopted in 1982, had the backing of 92% of voters, while the previous one was approved by 62% of voters in 1961. How will the new system function with a popular approval of 51%?

The vital issue of political stability also raises the question of economic stability. Economies need political stability and growth. Over the past several years, Turkey has lost its growth momentum under the impact of both external factors and domestic risks. In the second half of 2016, the economy came to the brink of a crisis, with the growth rate dropping to 1%.

Lacking solid domestic savings, the Turkish economy is heavily dependent on the inflow of foreign capital. This comes mostly through borrowing, which means that debt stocks constitute a major burden on the economy. According to the Central Bank of Turkey's latest data, Turkey’s external assets stood at about $217 billion at the end of February, while its liabilities to external parties — or debt — was over $589 billion. This amounts to a net position deficit of some $372 billion, which corresponds to about 43.5% of the country’s gross domestic product, revised upward to $857 billion under a controversial reform in December 2016.

For such an economy, the inflow of foreign capital remains as crucial as ever. Will foreign investors see any easing of risk under the new system? They certainly have other investment options. Turkey is not the only one. Will the new system make Turkey more attractive than its alternatives?

In terms of credit default swaps, which indicate risk premiums, Turkey today is the riskiest country in the so-called “Fragile Five.” Its risk premium is 233, followed by Brazil with 220 and South Africa with 216. Russia’s risk premium is 166, while Indonesia’s is 129.

Since September 2016, the world’s top three credit-rating agencies have cut Turkey down to noninvestment grade. Rated on a numerical index between 0 and 100, Turkey’s credit worthiness is 44, a score seen as a message to stay away, especially by institutional investors.

Can the new system rid Turkey of its “risk champion” status? Can Turkey improve its image while its president, immediately after the referendum, threatens to hold other plebiscites on ending the country’s bid to join the European Union and reinstating the death penalty?

It goes without saying that foreign funds, be they direct investments or loans, cease to flow in or decrease significantly if the country’s risk premiums and credit ratings fail to convince. What comes in such circumstances is mostly short-term investments in stock shares and bonds. Such volatile capital movements often cause the Turkish lira to slump against the dollar and the euro. In other words, foreign exchange becomes more expensive, which, in turn, increases the cost of imports and loans, and ultimately curbs economic growth. Goods imported with more expensive foreign exchange rates mean higher costs at home and thus inflation. Also, when exchange rates increase, companies indebted in foreign currency see their debt swell in terms of Turkish lira. The Turkish real sector’s net foreign exchange deficit remains over $201 billion at present.

When it comes to inflation, Turkey’s consumer inflation is already 11.3% year on year, while producer inflation has reached 18%, as manufacturers keep hiking prices on the grounds of higher exchange rates. The upward trend in producer prices is expected to continue in the coming months, meaning a higher consumer inflation.

An equally worrying problem is the double-digit unemployment rate. In official data released April 17, the rate stands at 13%, which means some 4 million people are jobless. A broader definition puts the figure at about 20%. Joblessness among young people in the 15-24 age group is particularly alarming, standing officially at 24.5%.

Fiscal discipline has long been a centerpiece in Turkey’s shop window for foreign investors. The fact that the budget surplus has devolved into a deficit suggests that this is now the only way the government can manage the crisis. This raises further questions on what is coming next, for public funds are not a bottomless well. Failing to bridge the gap will lead to more borrowing and more public funds spent on interest rate payments. For a Turkey with already chronic current account deficits, this would threaten the additional problem of public deficits.

The Turkish business community expects Ankara to take steps free from political considerations. The first and foremost expectation is a return to fiscal discipline, which has been a major element in luring foreign investors. A speedy drive to mend fences with the EU is another key expectation to galvanize the inflow of foreign funds and give a fresh impetus to growth.

The business community may be full of such well-meaning expectations, but the prospect of the government insisting on populist policies to consolidate the narrow 51% majority it clinched at the referendum cannot be ruled out. Ankara may well opt for loosening by reducing taxes, issuing tax amnesties and increasing spending, just as it did ahead of the referendum. Such election-oriented steps would clearly undermine public finances and other cornerstones of the economy, but political motives could well supersede economic considerations again.