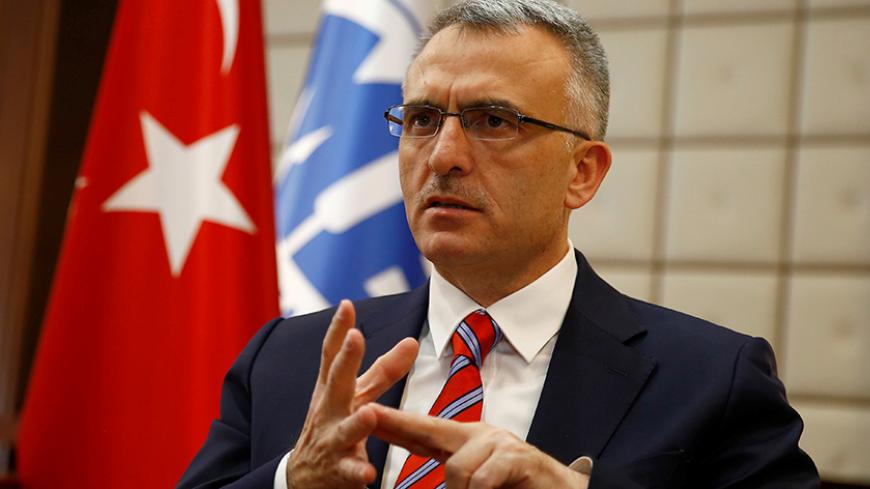 In a stunning move Feb. 6, the Turkish government transferred public assets worth billions of Turkish liras to a sovereign wealth fund that it hastily created last year. Structured through legislative decrees under the state of emergency declared after the coup attempt in July, the Turkey Wealth Fund (TVF) appears destined to continue to stir controversy.

The ruling Justice and Development Party (AKP) says the TVF is similar to sovereign wealth funds operated by oil-rich Gulf states, Norway and other countries with current account and budget surpluses. In reality, the only similarity is the name. Turkey, a country with a chronic current account deficit, has no budget surplus, but rather a budget deficit, which happens to be on the rise. Why Ankara sought such a fund is becoming clearer as it gradually takes shape.

Judging by what has emerged so far, the TVF is expected to assume some budgetary and Central Bank functions. As a primary goal, it will probably be used to provide lifelines or even life preservers to the AKP’s “megaprojects” — public-private partnerships (PPP) in giant infrastructure investments — by using the public liquid assets transferred to its disposal.

The Turkish economy is currently contracting. Last year’s overall growth rate is not yet known, but existing data suggest it barely exceeded 1.5%, a steep decline from 6.1% in 2015. The outlook for 2017 is similarly pessimistic. Turkey’s economy relies on external funds to grow, but the customary level of these capital inflows is no more. The world’s top three credit-rating agencies have cut Turkey to “non-investment” grade, with the Federal Reserve’s rate-hike policy also contributing to the exit of foreign funds.

As a result, the dollar has climbed dramatically against the Turkish lira — 20% last year and 25% in 2015 — dealing a severe blow to indebted private companies, which are running a net foreign exchange deficit of $213 billion. The companies involved in the PPP projects are particularly burdened in this regard, as the Central Bank noted in November. The government has granted turnover and leasing guarantees to these companies, while acting as a guarantor for their external borrowing as well. The big risks and financial strains of these companies have now become a source of serious concern, highlighted also by the credit-rating agencies.

The TVF was created in August after the increasing risks began to show. On Feb. 6, the liquid assets of major public entities, including Turkish Airlines, banks and energy and telecommunications companies, were transferred to the fund. The TVF is now expected to create a portfolio with these assets, put it in the shop window and embark on borrowing, aiming to lure more foreign investment to Turkey. This would essentially amount to a new borrowing channel, parallel to the treasury’s borrowing via government bonds.

How is this supposed to serve the government? If the need for more borrowing were to be met via the central government budget, the ratio of Turkey’s public debt stock to its gross domestic product (GDP) — about 30% at present — would immediately increase. Given the shrinking economy, the budget deficit is already bound to expand. So, a growing budget deficit, coupled with a swelling debt burden, would further mess up Turkey’s shop window display aimed at foreign investors.

The fund will serve as a “parallel budget,” taking over some of the borrowing and deficit burdens, which, Ankara hopes, will keep the debt-to-GDP ratio tidier. Of course, foreign investors and credit-rating agencies will not be hoodwinked by this, but in times of stress, even the most amenable of people can act like an ostrich and bury his or her head in the sand.

In remarks to Hurriyet on Feb. 8, Finance Minister Naci Agbal said, “The wealth fund will be able to borrow, finance projects or secure financing for big projects by using the assets in its inventory as collateral.” So this is the first obvious purpose of the fund. Can it, however, get an investment grade from ratings agencies by simply putting up a portfolio of public assets? This would seem rather difficult to achieve, because sovereign wealth funds are supposed to adhere to the Santiago Principles, the first of which is having a “sound legal basis.”

The TVF was shaped largely through legislative decrees, a tool the government acquired under a controversial state of emergency. This alone bears negatively on its credibility. The timing of its creation is another serious handicap, which, along with the flawed legal basis, makes Ankara's borrowing hopes look like mere fantasy.

Turkey already has the highest risk premium among emerging economies, having recently outstripped Brazil. The two are followed by South Africa, Russia and Mexico. What makes Turkey the “risk champion” is not only economic volatility, but political and geopolitical risks as well. The country is headed toward a raucous referendum in April that will decide the fate of constitutional amendments to install a presidential system. In such a climate of political turmoil, the TVF’s plans could easily go down the drain.

While trying to obtain funds through borrowing, the TVF is likely to take over financially strained investment projects and shares and debts of companies involved in them. This would amount to throwing a life preserver to the companies, most of which are owned by AKP cronies. Agbal’s remarks about the fund securing “financing for big projects” point toward this.

According to critics, the TVF will function not only as a “parallel budget” but also as a “parallel central bank.” The fund is expected to use the cash of public entities to fend off “speculative attacks” on the market. Three billion Turkish liras ($807,000) from the Defense Industry Fund, for instance, have been transferred temporarily to the TVF. Explaining the decision, Agbal said, “Maintaining stability on the financial markets by drawing up measures against fluctuations will be among the duties of the fund. To fulfill this duty … the fund needs liquidity. We are not taking the 3 billion Turkish liras for good.”

Deputy Prime Minister Nurettin Canikli offered a similar explanation, saying the TVF “will contribute greatly to calming markets and repelling attacks in times of extreme market fluctuations and when speculative operations, economic sabotage and attacks intensify.” Thus far, this has been a function of the Central Bank. How successful the TVF will be remains, of course, to be seen.

In sum, at a time when Turkey’s national income has stopped growing, a newly established entity will use large chunks of existing public funds at the expense of other public institutions. The TVF will be exempt from public audit and supervision, and function as a company. This is perhaps a fantasy come true for the AKP, whose members often say the state should operate like a company. Whether this leads to stability or power struggles and fiscal disarray, only time will tell.