Erdogan makes himself ‘czar of the economy’

Turkish President Recep Tayyip Erdogan’s decision to take the helm of Turkey’s sovereign wealth fund compounds misgivings over an institution that holds the country’s key public assets, but is already mired in controversy for lack of transparency and public supervision. 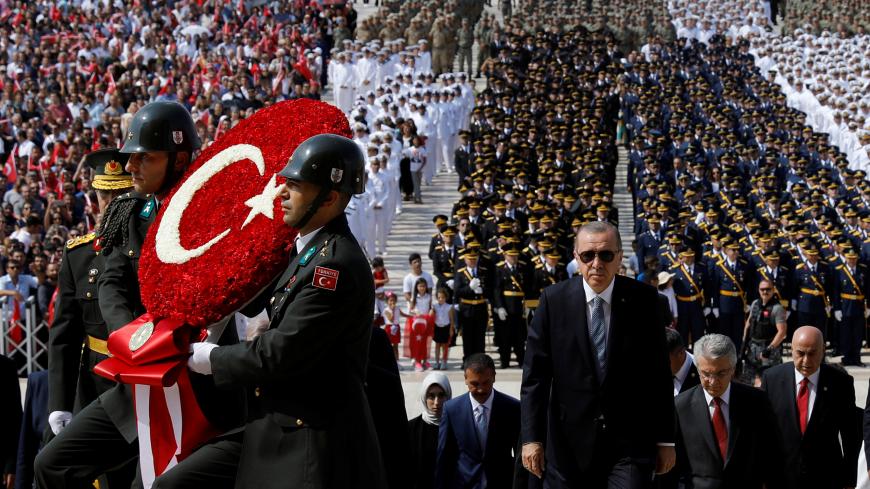 Faced with economic turmoil fueled by the meltdown of the Turkish lira, President Recep Tayyip Erdogan has been issuing threatening messages against price hikes and capital flights. On Sept. 12, he took a critical step that effectively made him the czar of the economy. Erdogan appointed himself the head of the Turkey Wealth Fund (TVF), which holds $200 billion public assets, while naming as deputy his son-in-law Berat Albayrak, who is also the treasury and finance minister. By taking the helm of an institution that controls strategic public companies, Erdogan is assuming an extraordinary authority over the economy.

Sovereign funds are generally created by countries with budget surpluses to set aside funds for investment to benefit their citizens and economies. Some of the world’s best-known sovereign funds include those of oil-rich nations such as Norway and Gulf countries. Turkey’s case is rather out of spec, for it boasts neither budget surpluses nor energy revenues.

Since the fund was already under government control, why did Erdogan feel the urge to take the reins into his own hands?

The first point the opposition highlights is that the new structure removes Turkey’s key economic and financial assets from the scope of public auditing. The second point is the planned use of the fund for borrowing in a bid to overcome increasing financial strains. Turkey needs to secure $230 billion in external funds to roll over its economy in the next 12 months.

A legislative decree, issued in December, had authorized the TVF to borrow and transfer debt. Why was this necessary while the treasury was already there? The treasury remains bound by certain rules, including a budget approved by parliament, while the TVF is legally a company, enjoying both flexibility and exemption from public auditing. It can now securitize the revenues of the entities in its portfolio and borrow as much as it wants from any lender it likes. Companies in the TVF can transfer their debts to other companies created by the fund. In other words, the mechanism extends the treasury’s domestic and external borrowing authority to the fund, and, by implication, to Erdogan. Hence, it is often described as “a parallel treasury.”

For economist Umit Akcay, the management shakeup is fraught with confusion and uncertainty. “Frankly, I am struggling to figure out what prompted the administrative changes, for the fund was already attached to the president’s office,” he told Al-Monitor. “This could be a preparation for something that we don’t know yet or an attempt to create a more centralized structure.”

Akcay explained that the previous administration had drawn up a strategy paper for the fund, but it was never officially released. “There could be a dispute on what the strategy should be,” he said. “Turkey’s financing needs will grow in the coming days, so this could be a sort of a preparation for that.”

Erdogan’s decision to take over the fund incensed the opposition. Kemal Kilicdaroglu, the leader of the main opposition Republican People’s Party (CHP), tweeted, “What a state! The president appoints himself the head of the wealth fund and his son-in-law the deputy. The fund he presides over is outside the budget. The Court of Accounts and parliament cannot audit the fund.”

CHP spokesman Faik Oztrak, a former treasury undersecretary, grumbled that Turkey was descending into “the league of failed dynasty states” in the Middle East. “How will local and foreign investors trust Turkey if the president appoints himself the head of the fund and his son-in-law the deputy? Who is going to audit them?” he asked, warning that the move would exacerbate the confidence problem in the economy and fuel capital flights.

In remarks to an online journal, Yalcin Karatepe, professor of finance at Ankara University, commented that Erdogan would now decide which public assets would be transferred to the fund. “The disposals over those assets will not be subject to public auditing. There is no Court of Accounts auditing here,” he said. “The wealth fund is a company subject to private law provisions. It can borrow, make investments, set up partnerships and deal at the markets. Its powers are too broad, but its auditing is limited to independent audit, which excludes expediency and compliance and pertains only to accounting records,” he added.

Besides the size of the TVF itself, the amount of funds it will create is equally important. In the early days of the TVF, the pro-government press had painted a rosy prospect, whereby “once the fund’s assets reach $200 billion, it will be able to create funds of up to $1.2 trillion through the issuance of bonds and debt securities … without disposing of those assets.”

The precise value of companies handed over to the fund is not actually known. In February 2017, Treasury Undersecretary Osman Celik said the total value of assets stood at $160 billion. Since then, the general estimate has reached $200 billion.

Lack of transparency and extreme exposure to politization remain the fundamental problems of the fund.

Turkey is no stranger to how extrabudgetary funds could spiral out of control. Such funds had proliferated in the 1980s under the premiership of Turgut Ozal. Recalling those years, economic commentator Bahadir Ozgur told Al-Monitor, “We know from the Ozal era how such funds could become a dangerous tool in government hands. Ozal was the inventor of the extrabudgetary funds. He was struggling to create funds for his big infrastructure projects and in order to get rid of budget constraints and the legal restrictions of borrowing instruments, he moved to set up funds that were attached directly to him and were free of parliamentary supervision. But things ran so amok that the precise number of funds remained unknown for years. In 1991, a minister, who was asked a question on the issue, admitted he could not remember the number of funds.”

After Ozal’s party lost power in 1991, “the state struggled for months to determine the assets and liabilities of the funds,” Ozgur continued. “Yet most of the money was in 11 basic funds. And it turned out that almost all resources there were funneled to giant populist infrastructure projects, and via them to businessmen and contractors close to the government or relatives of politicians.”

Yet in Ozal’s time, Turkey’s public scrutiny mechanisms, including parliament, were more efficient than their defanged versions today. At a time when all powers are concentrated in the president’s hands and opacity and nepotism are on the rise, concerns over the future of the fund are all the more legitimate.