Turkey’s government has mobilized public funds to avert a full-blown economic crisis ahead of a critical referendum on transition to a presidential system, expected in early spring. 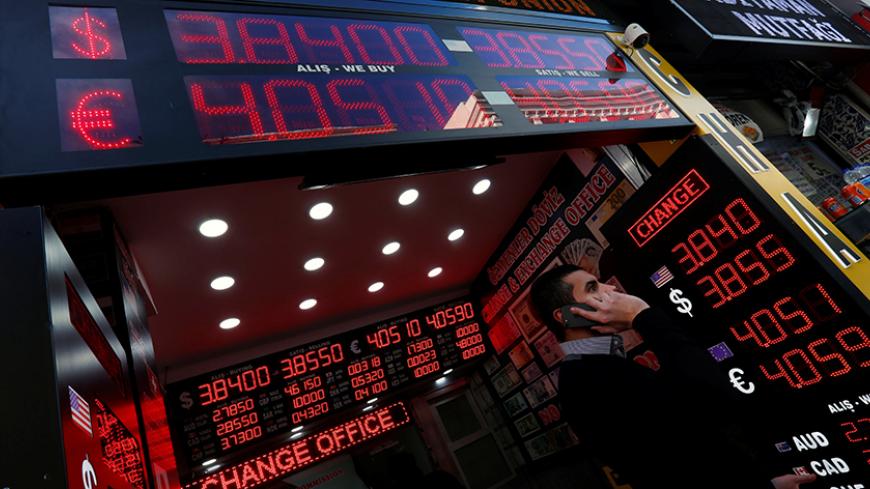 After 14 years in power, the Justice and Development Party (AKP), the representative of radical Islam in Turkey, has finally focused on its main objective: a regime change to install a one-man rule. A set of constitutional amendments, drawn up and brought to parliament by the AKP, needs the support of at least 330 deputies in the 550-member legislature to make it through. The ruling party, which holds 317 seats, hopes to pass the bill with backing from the 40 deputies of the Nationalist Action Party, which shares nationalist and Islamic values with the AKP. Should the bill get the necessary support in the upcoming vote, it will be put to a referendum within two months’ time.

If approved, the amendment will legitimize the de facto executive presidency that President Recep Tayyip Erdogan is already exercising, while handing him a number of powers that currently belong to the legislature, the prime minister's office and the judiciary.

Under the draft, the president can be the leader of his or her political party and determine its candidates in parliamentary elections, dissolve parliament, draw up the budget, issue legislative decrees and veto bills passed by parliament. In the judicial realm, the draft entitles the president to appoint the chair and six of the 13 members of the Judges and Prosecutors Board as well as 12 of the 15 judges of the Constitutional Court. In terms of executive powers, the president would be entitled to appoint the ministers and senior bureaucrats (including ambassadors), shape educational and military institutions, approve international agreements, determine national security policies and declare states of emergency. As commander in chief, the president will also bear on how the country’s armed forces are used.

According to the draft, the president can serve three terms and use all his or her powers without any accountability. He or she can only stand trial at the Constitutional Court if as many as 400 deputies in the 600-member legislature vote in favor of such a move.

This final stretch in the AKP’s 14-year marathon toward a one-man regime has coincided with the Turkish economy’s descent into crisis. The referendum outcome will depend on voters who have begun to slowly feel the heat of the crisis.

In Turkey, the base of Islamist voters is estimated at some 20% of the total electorate. The rest of the AKP’s vote — 49.5% in the last elections in 2015 — has come partially from the collapsed center-right and partially from fluctuating voters. The fluctuating voters have backed the party largely as a result of being gratified by a growing economy, the result of favorable domestic and external conditions from 2003 to 2013.

The economic growth that took place until recently relied heavily on the inflow of foreign funds and loans, amounting to an average of $40 billion per year. This provided jobs and income to voters, even if on a modest level. Coupled with a privatization drive, the economic growth boosted tax revenues and public income, which resulted in new, voter-oriented services in health care, education, transport and social assistance that impressed the masses. Also, some of the foreign funds flowing to Turkey were transformed into consumer loans and credit-card borrowing by banks, which allowed the electorate to spend more, even if on debt, while bonding it to the ruling regime.

Since mid-2013, however, the tide has been turning. Foreign funds, which used Turkey as a temporary parking lot during the global crisis, began to look to the United States amid signals of growth and rate hikes, boding an end to the tailwinds the AKP had enjoyed for a decade. The era of the cheap dollar was over. Besides the economic risks, Turkey also accumulated political and geopolitical risks, which further scared off foreign investors. In 2015, the dollar rose 25% against the Turkish lira, followed by another 20% increase in 2016 and a sharp upward trend in the first weeks of 2017.

The greenback’s dramatic appreciation caught the Turkish economy off guard, upsetting all macroeconomic balances just as the regime-change operation got underway. This, of course, is a cause of concern for the AKP. The government has now intensified efforts to weather the referendum before the fire from the economic crisis engulfs the street, resorting even to providing “referendum candies” to the electorate.

Hiking interest rates on the lira is the antidote of the rising dollar price. This, however, could further slow the domestic market. Erdogan, in particular, is averse to rate hikes, sending chilly messages to the Central Bank. The bank itself is not sure whether hiking rates can do the trick because the dollar has been fueled not only by the flight of short-term foreign investments but also by the heightened demand of Turkish companies indebted in foreign currency. As the Central Bank’s latest Financial Stability Report indicates, the foreign-exchange deficit of companies involved in the government's “megaprojects” is particularly worrisome.

Yet, the core reason behind the dollar’s extraordinary rise against the lira stems from Turkey’s unrelenting political risks. Instead of seeking normalization to reduce the risks, the AKP has fanned the climate of conflict by bringing up the constitutional change, which hardly helps in luring foreign funds or easing the dollar demand at home.

The government is now seeking a controlled use of the interest-rate weapon, trying to avoid any shock measures until the referendum. In this context, the Central Bank has implicitly raised the banks’ borrowing rate to curb their dollar purchases.

The government has also pressed public agencies and pro-AKP quarters to convert their foreign-currency funds to Turkish lira, but this has had little effect. With the greenback refusing to climb down from 3.75 lira, some measures are being considered to prop up the private sector as companies of all sizes in all sectors are struggling to cope with such a high exchange rate. These include a pledge of government guarantees for credit lines the banks are urged to open. In the meantime, however, the reluctant banks are being accused of “opportunism” as they try to strengthen their foreign-exchange positions and reduce loan repayment risks, with Erdogan personally threatening the sector.

Meanwhile, a long-standing “fiscal discipline,” which has cut the budget deficit to as low as 1% of gross domestic product, seems to allow the government some generosity in the face of the crisis, especially ahead of the expected referendum. But this also requires utmost caution. Turkey’s bitter experience before 2000 teaches a good lesson on how difficult it is to pull things together once budget deficits spiral out of control.

Still, the government is not shying away from pumping money into where it is needed. While public banks are being directed to provide lifesavers, hard-pressed construction companies that enjoy government favor are being offered facilities via state housing developer TOKI, and the state is buying the excess housing stocks of private firms to relieve the sector.

In short, the central government budget and other public funds seem mobilized to prevent the crisis from biting voters ahead of the expected referendum. Yet, the crisis is growing with such menacing speed that fending off popular frustration by sweeping the problems under the rug could prove difficult, even in the short term.

On Jan. 16, the newest unemployment data came as the omen of an approaching avalanche. The unemployment rate jumped from 11.3% to 11.8% in only one month. This puts the number of jobless at 3.67 million in October, half a million more than a year before. The fact that nearly 1 million of them hold university degrees makes the outlook even more alarming.