Turkey's AKP scrambles to contain crisis ahead of key vote

Turkey’s government has enacted a series of economic measures to woo voters ahead of a key constitutional referendum, but the threat of the economic crisis is far from over. 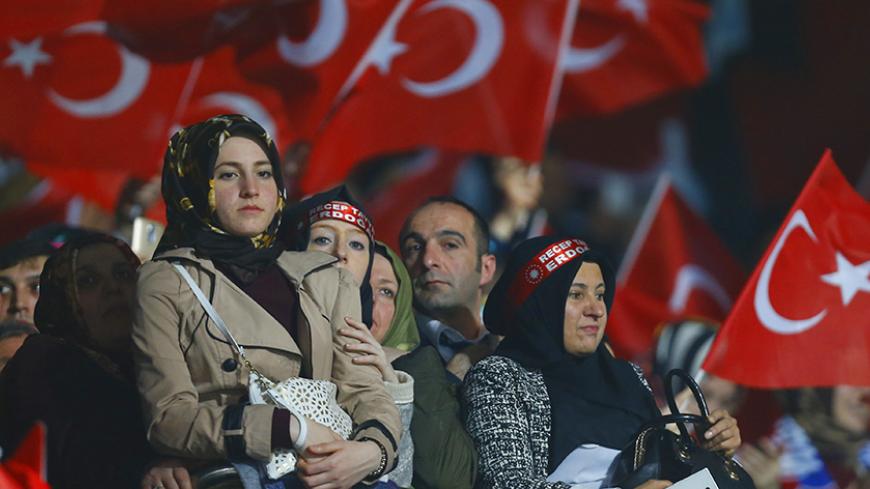 Turkey’s domestic agenda is tied to the April 16 referendum on a set of constitutional changes, which the Justice and Development Party (AKP) has designed as a steppingstone to a one-man regime under the guise of a shift to an executive presidency.

The move comes at a time when the Turkish economy has begun to contract, with some sectors, such as the manufacturing industry, already in crisis. Brought to parliament in December, the amendments fueled political tensions and added to the country’s already high-risk premium, further stoking the crisis and leading international credit-rating agencies to cut Turkey to noninvestment grade.

Simultaneously, Turkey has also lost the tailwinds of global trends, as international investors began pulling out from emerging economies, including Turkey, and turned to the United States, lured by President Donald Trump’s election promises to boost economic growth. As a result, the dollar began to gain value fast. The greenback rose 20% against the Turkish lira in 2016, atop 25% the previous year. For Turkey’s private sector, which runs a net foreign exchange deficit of $210 billion, this meant a heavier debt burden. Manufacturers relying on import materials faced higher costs, which translated to price hikes for consumers. In January, Turkey’s consumer inflation reached 9% year on year, signaling a climb toward two-digit figures. The increase in producer prices, meanwhile, was close to 14%. In the labor market, the downturn sent the jobless rate above 12%.

The gloomy outlook does not bode well for the AKP in the run-up to the referendum. Opinion polls suggest a tight race, and the “no” camp is in high spirits. Scrambling to minimize the fallout from economic woes, the government has drawn up a series of monetary, financial and labor-oriented measures to woo the electorate. Some of them will run until the end of the year to alleviate the impact of the crisis, but some are timed particularly for the referendum to deter the “no” vote. The bulk of the measures were part of an omnibus law, published in the Official Gazette on Jan. 18.

The monetary measures were mostly enacted by the Central Bank, whose main priority was to rein in the dollar. President Recep Tayyip Erdogan had declared his own war on the greenback, urging citizens and public entities to convert their dollar savings to the Turkish lira. The campaign, however, had little effect, and the dollar continued to soar. The Central Bank, for its part, pushed interest rates up, but given Erdogan’s vitriolic stance on the issue, much of this operation was conducted “covertly” through moves deterring banks from the dollar.

In another move, the Central Bank allowed export and foreign exchange earning sectors to repay rediscount credits due by May 31 in Turkish liras rather than in foreign currencies, and it fixed the dollar rate for these transactions at 3.5 Turkish liras. This was essentially a gesture to hard-pressed companies at the expense of the Central Bank’s own earnings.

When it comes to financial measures, they consist mostly of tax cuts, aimed at animating the economy. A number of taxes were lifted until the end of May for the housing, domestic appliances and furniture sectors, which had seen the sharpest decline in demand. Finance Minister Naci Agbal said in mid-January that a value-added tax (VAT) reduction from 18% to 8% for home sales, which was to expire in March, had been extended until September. He also announced that foreign buyers purchasing homes and offices from construction companies in Turkey would be exempt from VAT.

The omnibus law also included a number of measures that postponed and restructured the tax and social security premium debts of both small and large businesses, and it pardoned accumulated fines. The ground was laid also to pardon the loan default records of companies to improve their borrowing ability from banks. In another move to facilitate access to bank loans, the treasury's contribution to the credit guarantee fund was increased from 2 billion liras ($550 million) to 25 billion liras.

Another set of measures aims to curb unemployment by lowering employee costs. Last year, the government had launched a scheme to alleviate the cost of minimum-wage workers for employers, which covered 9 million employees at a cost of 10 billion liras from the budget. The support plan has now been extended until the end of 2017.

To reduce the 3.7-million-strong army of the jobless, the government has offered incentives for new hires. Accordingly, employers will be exempt from paying salary taxes and social security premiums of any new minimum-wage workers they employ. The gap will be covered from the budget and could cost as much as 12.5 billion Turkish liras. Labor Minister Mehmet Muezzinoglu told businesspeople Feb. 17 that the target was 1.5 million new hires. He also said the government would finance three-month job-training programs for 500,000 educated but inexperienced young people in the private sector with a view of facilitating their entry into the labor market. Their monthly wages of 1,502 Turkish liras ($413) will be up to the government, he added.

Whether this package of measures will help alleviate the crisis and weaken the “no” camp in the referendum remains to be seen. What is certain, though, is that it will lead to significant gaps in the central budget. The AKP has so far managed to keep the central budget deficit at 1-2% of gross domestic product. Can it now afford an increase of about 1 or 2 percentage points? A newly created sovereign wealth fund has been taking over some important budget resources, which means the gaps are likely to grow. The misuse of the Unemployment Insurance Fund is likely to create additional problems, too.

In February, the dollar retreated against the Turkish lira to a certain extent as international investors began returning to countries like Turkey, put off by Trump’s early performance. But what if the money flow changes direction again, let’s say with a rate hike by the Federal Reserve? Could Ankara’s measures come to naught with another exodus of foreign capital?