The European Parliament’s vote to suspend Turkey’s membership talks is the latest move to worsen the rapid decline of the Turkish lira's foreign exchange rates. 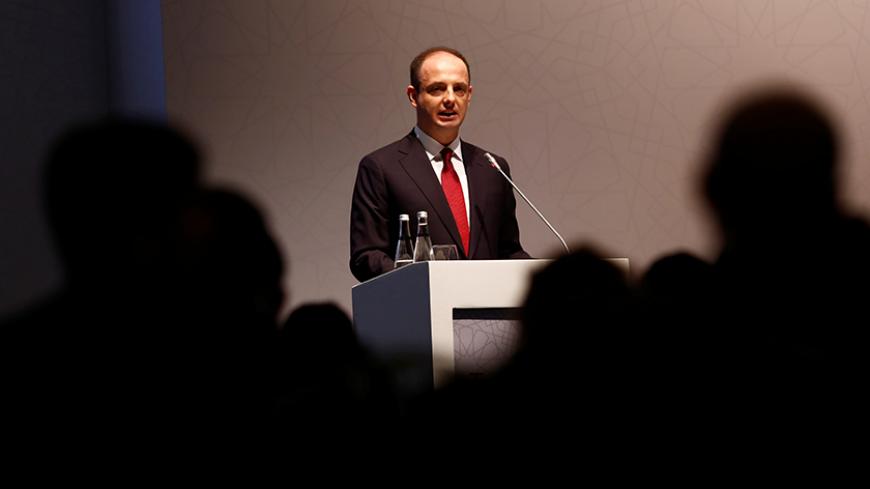 In its heyday, years before the 2009 global financial crisis as well as in the ensuing years, when the United States and Europe pursued liquidity expansion to battle the crisis, Turkey’s ruling Justice and Development Party (AKP) enjoyed abundant inflows of foreign capital, with an annual average of nearly $38 billion for the past 14 years.

Those resources, however, were used mostly toward domestic demand, financing consumer loans and sectors that bring in no foreign exchange gains, such as construction. As a result, Turkey’s current account deficit became a chronic problem and its external debt stock, 40% of which is short-term, swelled to nearly 60% of the gross domestic product. In addition, inflation and unemployment in those years got stuck at 7%-8% and around 10%, respectively, while investments ground to a halt. Thanks to the global fall in energy prices, the current account deficit — $35 billion annually on average — did not widen, but did not recede either.

The US Federal Reserve’s decision to hike rates, the first signal of which came in 2013, led to occasional outflows of foreign capital, and the appreciation trend of the dollar began. Yet the Fed’s vacillations and the European Union’s zero-rate expansionist policies meant that foreign funds were willing to stay in emerging economies such as Turkey’s for some time longer. As a result, the fragile Turkish economy was able to stay on its feet, though the inward structural loss continued.

Turkey’s reliance on external funds had grown, but starting in the second half of 2013, foreign investors began to lose their appetite in Turkey, leading the Turkish lira to lose ground fast. The dollar’s appreciation against the lira since 2013 will be 60% by the end of 2016 if its rise this year is contained at the current 12%. Given that consumer prices have increased 25% in the same period, the economic structural loss caused by the rise of the greenback becomes plain as day.

The economic decline since 2013 has been reflected in the reports of both the International Monetary Fund and credit rating agencies, which serve as a beacon for investors. Along with economic risks, Turkey’s political and geopolitical risks have also been on the rise since 2013. The Gezi Park revolt in the summer of 2013 and the AKP’s acrimonious fallout with longtime ally Fethullah Gulen later in the year were factored in as higher political risks at home. In terms of foreign policy, Turkey’s stance in the Syrian civil war and the Iraqi turmoil, the crisis with Russia and recurring frictions with the United States all went down in the books as increasing geopolitical risks. On top of all this, Ankara’s shift to a path of conflict with the Kurdish movement, followed by the Gulenist coup attempt July 15, meant that the risks had hit the ceiling, and credit rating agencies cut Turkey to “non-investment” grade.

In November, two major external developments have further darkened Turkey’s outlook. First, Donald Trump’s election victory in the United States accelerated the flight of foreign capital, underway since the rating downgrade, as Trump’s signals of rate hikes to boost economic growth seemed to encourage investors. This, in turn, intensified the Turkish lira’s slump against the dollar.

The bigger blow, however, came Nov. 24, when the European Parliament voted in favor of freezing membership talks with Turkey, citing Ankara’s worsening record on human rights and the rule of law. The vote is not binding for European leaders, and the general expectation is that member states will not take any further steps against Turkey, making do with the “political message” delivered by the Parliament’s vote. But even this message was enough to further scare off investors.

Earlier on Nov. 24, the Central Bank’s Monetary Policy Committee had used its rate-hike weapon in a bid to rein in the dollar. Despite President Recep Tayyip Erdogan’s pressure for lower interest rates, the committee announced a drastic hike of 50 basis points in its policy rate, bringing it to 8%, along with other moves aimed at curbing foreign exchange rates. But before these decisions could make any impact on the markets, the news from the European Parliament propelled the dollar anew, sending it to a record high of 3.47 Turkish liras.

Erdogan and the government, meanwhile, lashed out at the European Parliament, adopting a bellicose attitude and dismissing the criticism on violations of the rule of law, human rights, free speech and media freedoms. According to the prevailing sentiment in the higher echelons in Ankara, the call to freeze membership talks was nothing but a conspiracy against the ruling regime.

No matter what Ankara believes, the European Parliament’s move has compounded the country’s risk aggregate. From the vantage point of investors, the vote signifies a major rift in Turkey-EU ties, the healing of which will take time and depend on conditions.

The real question now is how Turkey will meet its burden of liabilities and contain economic contraction with a dollar that has perched itself at the 3.4 benchmark against the lira. Amid the increased perception of risk, the inflow of foreign capital will further decline, foreign exchange deficits will worsen and meeting liabilities will become more difficult. Hit by huge losses due to the rising price of the dollar, how are economic actors with foreign exchange deficits going to adapt to the new environment?

While the dollar seems unlikely to climb down from its current level, the Central Bank’s rate hikes will push the economy to contract. The more expensive dollar will inevitably lead to cost inflation through the increased price of imported inputs, which, for the Central Bank, will mean further rate hikes. The dollarization of deposits, meanwhile, is also accelerating, as appeals for a return to the Turkish lira seem to bear little fruit. This, too, is creating pressure to hike rates.

In sum, the Turkish economy is now under the double strain of a more expensive dollar and higher interest rates, which are likely to increase further.

Nonfinancial companies have taken the heaviest blow from the dollar’s appreciation. Spurred by too much enthusiasm for Erdogan’s “mastership era,” the rush to external borrowing several years ago has left them with $211 billion in foreign exchange deficit, up from $67 billion in 2009. Now they will have to contend also with higher interest rates and a shrinking domestic market. The private companies’ crunch will inevitably bear on the banks they deal with. Preventing a crisis in the real sector from spilling over to the financial one will not be an easy task. And who can guarantee that efforts to contain such crises using public finances will keep the budget fireproof and not create huge deficits? With a government reluctant to acknowledge its problems, controlling the blaze does not seem easy at all.