Turkey's AKP manages to fend off economic crisis, but at what price?

The Turkish government has succeeded in fending off a full-blown economic crisis, but its measures have made the economy less resilient against future contractions. 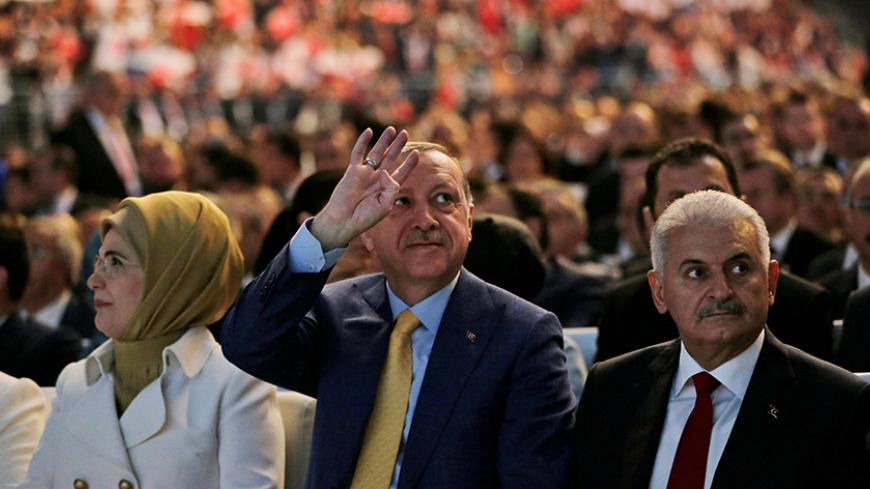 Turkish President Recep Tayyip Erdogan, accompanied by his wife Emine, and Turkish Prime Minister Binali Yildirim, waves to supporters during the congress of the ruling Justice and Development Party in Ankara, Turkey, May 21, 2017. - REUTERS/Burhan Ozbilici

Until early 2017, Turkey appeared to be headed toward an economic crisis, the first omens of which came in the second half of 2016 and intensified toward the end of the year. The economy had begun to contract and was technically entering a crisis, but the governing Justice and Development Party (AKP) succeeded in “managing” things, and Turkey — at least for now — stands away from a full-blown crisis. Yet steering the ship away from the rocks came at a hefty price, which is equally important. The Turkish economy today is more fragile and less resilient.

For starters, let’s recall how Turkey came to the brink. In 2015, the economy grew about 6%. The inflow of foreign funds, which the Turkish economy needs badly to grow, had fallen short of expectations, but the much-needed foreign exchange was met through Central Bank reserves and savings kept abroad. The first half of 2016 did not go badly, with growth standing at about 5%. In the second half, however, the rate dropped to 1% after a negative growth of 1.3% in the third quarter, which was widely seen as the harbinger of a crisis.

The third quarter was marked by a coup attempt in July, economic introversion and declining production. In September, international credit rating agencies cut Turkey’s rating to “junk,” citing serious risks in economic indicators as well as in domestic and foreign politics. External headwinds worsened the outlook further as the US Federal Reserves’ appetite for rate hikes drew global investors away from emerging economies, including Turkey. The dollar began to appreciate fast as it moved from emerging to developed economies, which meant that local currencies were losing value. Because of domestic fragilities, the Turkish lira depreciated more than its peers did.

In short, a crisis was looming on the horizon, and the government had to act fast as the economic downturn coincided with the run-up to a critical constitutional referendum on April 16. Managing the crisis became a primary issue.

The government introduced tax facilities and debt relief for companies under strain, cut taxes on durable consumer goods and increased public spending to keep the domestic market alive. On the monetary front, Ankara offered state guarantees encouraging banks to turn on the credit taps, instructed public institutions to convert their foreign exchange assets to Turkish lira to curb the rise of the dollar and urged citizens to do the same, while the Central Bank used indirect means of hiking rates. In a bid to rein in the rising unemployment, the government introduced measures encouraging companies to hire, using the unemployment fund and assuming part of the burden of new employees. In addition, it created a sovereign welfare fund, designed to function as a parallel budget, and put it in use to manage the crisis. The state of emergency, in place since the coup attempt, also came in handy. Ankara easily blocked worker strikes and openly intimidated trade unions.

As a result, the train that derailed in the third quarter was put back on track in the fourth quarter, with economic growth announced at 3.5%. This meant an overall 2.9% for 2016, which was half of the growth rate of the previous year, but still good enough to breathe a sigh of relief.

Crisis management moves continued in 2017, especially after the AKP sensed a strong “no” sentiment in the air ahead of the referendum. This led to more government spending, further instructions on banks to open up credit lines and new lifesavers for troubled companies via public lenders.

In the meantime, the global winds changed again, but this time to Turkey’s advantage. Starting in February, some of the runaway short-term investors pinched their noses and began returning to emerging countries, including Turkey. The opportunity to make profits from highly cheapened stock shares and lucrative government bonds sustained the trend of partial return. The inflow of foreign monies restrained the dollar and even pushed it back to some extent. The greenback, which had traded for an average of 3.73 Turkish lira in January, fell to about 3.60 Turkish lira in the ensuing months, facilitating the job of the crisis managers.

The growth rate in the first quarter of 2017 is up for release on June 12. It is expected to be around 3%, which the AKP will certainly present as a success and celebrate. Yet, as always, there is the other side of the coin. The price of averting the crisis and the risks accumulated in the meantime cannot be overlooked.

The rally of the dollar may have stopped, but the greenback is still expensive. Private companies remain with a foreign exchange deficit of about $200 billion, despite their efforts to reduce liabilities. The dollar’s appreciation has raised the cost of imported inputs, machinery and equipment, which, in turn, has hiked the prices of goods and services at home, bringing back two-digit inflation. In April, the year-on-year increase in producer prices reached 16%, standing as high as 22% in intermediary goods. Consumer inflation was lower — 12% — but pay raises have remained in the single digits. Thus, many Turks have seen their purchasing power decline, and the mutters of discontent are growing louder.

Moreover, both local and foreign entrepreneurs remain reluctant to invest. What drives economic growth is domestic consumption rather than investments, which means that the army of jobless is growing. Nonagricultural unemployment has climbed to an alarming 15%.

A worsening outlook in public deficits compounds the problems of inflation and unemployment. Turkey seems on the verge of becoming a “double-deficit” country, as the use of public funds to fend off the crisis — mostly the central government budget and to a lesser extent the unemployment fund — has led to a fresh deficit problem, atop the country’s chronic current account deficit. The central government budget ran a deficit of 18 billion Turkish lira in the first four months, a far cry from the surplus of 5.4 billion lira in the same period last year. The current account deficit, meanwhile, reached $8.3 billion in the first quarter, up 5% from $7.9 billion in the first quarter of 2016.

On the banking front, the ratio of nonperforming loans has reached nearly 9%, according to Huseyin Aydin, the head of the Banks Association of Turkey. This is a truly alarming trend, which Ankara plans to address with a measure that would shift some of the banks’ burdens on the Central Bank.

In sum, a widening public deficit, an arbitrary use of the Central Bank as a crisis firefighter and a menacing increase in bad loans have emerged as new and destructive elements on the crisis management bill, threatening further economic erosion in the coming days, atop the existing problems of inflation, unemployment and current account deficit.