The Syrian Democratic Forces forged a deal with the Syrian government to hold off the Turkish attack in northern Syria. 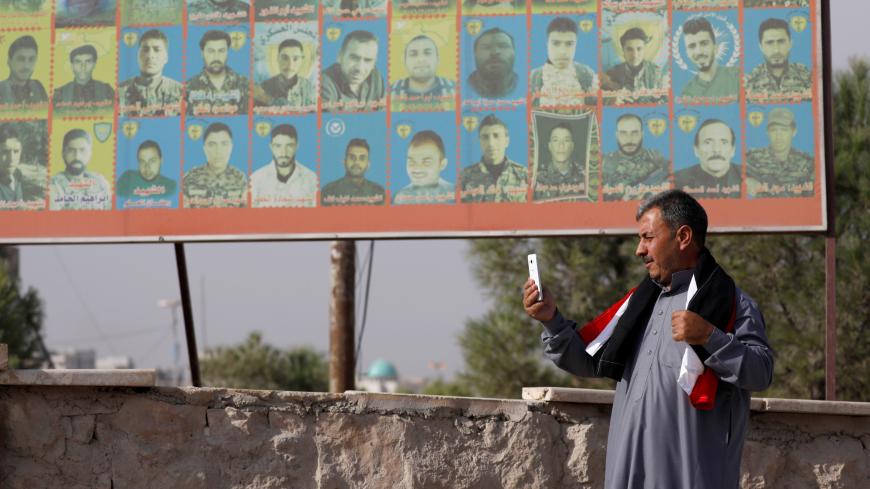 A man with the Syrian national flag draped over his shoulders uses his cellphone in Manbij, Syria, Oct. 15, 2019. - REUTERS/Omar Sanadiki

WEST OF MANBIJ, Syria — The agreement reached between the Syrian Democratic Forces (SDF) and the Syrian government Oct. 13 has shuffled the cards and changed the balance of power at a time when the Turkish army and the Ankara-backed Syrian National Army continue their assault on the SDF as part of the Turkish military's Operation Peace Spring, which was launched Oct. 9 in northern Syria.

The SDF-affiliated self-administration announced Oct. 13 that an agreement with the Syrian regime was concluded whereby the regime’s forces would be deployed along the Syrian-Turkish border to support the SDF in the face of the Turkish offensive and recuperate the areas it had lost.

The terms of the agreement were not made public, nor was what the Assad regime would get in return for its military support for the Kurdish fighters.

SDF commander Mazlum Kobane, however, said Oct. 13, “We are very aware that we would have to make painful concessions in our agreement with Russia and the Assad regime. But if we have to choose between concessions to them and between the annihilation of our people, we will certainly choose to preserve the lives of our people.”

The SDF suffered swift losses following the offensive by the Turkish forces and Syrian National Army, losing control of the town of Tell Abyad on Oct. 13 and an area of land estimated at 1,000 square kilometers (385 square miles), which is further proof that the SDF fighters were not able to hold off the attack on their own. This is especially true since Washington abandoned its Kurdish allies when it withdrew from the area.

On Oct. 14, Syrian regime forces entered several areas under SDF control, including the cities of Hasakah and al-Tabqa, and the Tabqa military airport.

The regime’s army has been deployed inside the safe zone Turkey had been planning to establish as part of Operation Peace Spring, which Turkish President Recep Tayyip Erdogan said would be 30 to 35 kilometers deep (19 to 22 miles).

The Syrian state news agency SANA reported Oct. 14 that units of the regime’s army had moved north of the country to counter “Turkish aggression.”

The Syrian regime also appears to have been engaged in fighting against Turkish proxies together with the SDF. On Oct. 15, the Syrian National Army announced the destruction of a tank belonging to regime forces near Ain Issa and the killing of two soldiers inside the military vehicle.

The most notable development, however, was on Oct. 14 when the Syrian National Army rushed to launch an offensive toward the SDF-held city of Manbij, 80 kilometers (50 miles) northeast of Aleppo. The regime responded and sent military reinforcements.

The Syrian National Army said it had taken control of two villages west of Manbij, but it failed to make significant progress as the SDF managed to hold off the overall attack.

In the event that the Syrian National Army takes Manbij, it would establish a supply route linking its control areas in the north of Aleppo, known as the Euphrates Shield area, to the areas it recently took over as part of the Operation Peace Spring near Tell Abyad and Ras al-Ain.

Al-Monitor was present on the front lines west of Manbij on Oct. 15; the area was cautiously calm but hundreds of Syrian National Army soldiers were positioned behind barricades with armored vehicles and heavy machine guns.

“Yesterday we were able to advance and take over two villages. Today, we received orders from the military leaders to halt any attack. We are waiting for a cue to start the offensive,” a soldier wearing a military uniform bearing the Syrian revolution flag and the Turkish flag told Al-Monitor.

New developments appear to have halted the offensive. The US-led coalition against the Islamic State pulled out from Manbij Oct. 15, and the Russian Defense Ministry later announced that it would conduct patrols along the front line around Manbij.

The sound of Turkish reconnaissance planes hovering overhead in the vicinity of Manbij was loud and clear. A field commander of the Syrian National Army, who spoke on condition of anonymity, told Al-Monitor, “Our attack on Manbij hinges now on the understandings between Ankara and Moscow. The talks are going on as we speak. We are on standby for battle when necessary.”

Erdogan said Oct. 16 in a press conference on his return flight from Azerbaijan that talks with Washington and Moscow over the cities of Kobani (northern Syria) and Manbij are ongoing, noting he did not mind Syrian troops being present in the area as long as the “terrorist Kurdish YPG [People's Protection Units] and PYD [Democratic Union Party] fighters” leave.

Erdogan’s statement reflects Turkey’s position regarding the recent agreement between the SDF and the Assad regime: As long as such an agreement undermines the presence and autonomy of the Kurds, it is in Turkey’s interest.