US President Donald Trump announced that he will host Turkish President Recep Tayyip Erdogan in November as his move to pull US troops out of Syria continues to sow chaos along the Syrian-Turkish border. 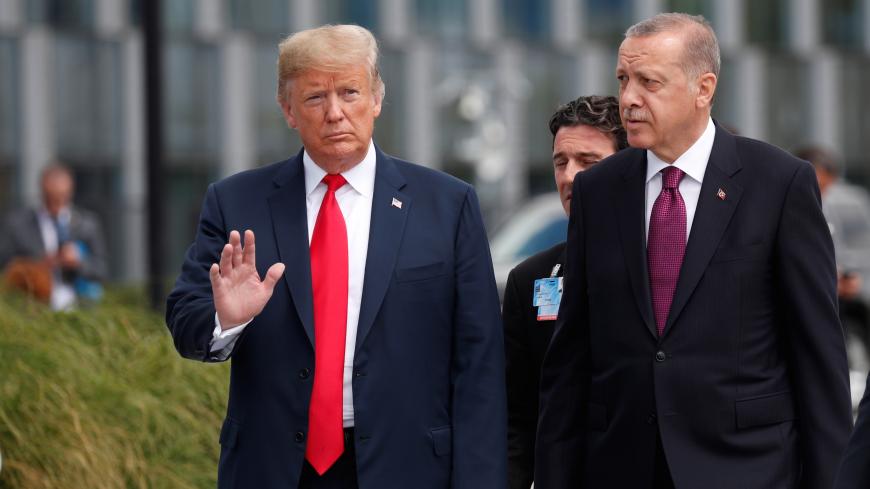 A day after threatening to obliterate its economy if Turkey attacked the Kurds, US President Donald Trump announced via Twitter that Turkish President Recep Tayyip Erdogan would be “coming to the US as my guest on November 13th,” and reminded his audience of Turkey’s importance as a trading partner and NATO member. He also thanked Turkey for freeing Andrew Brunson, the North Carolina pastor it held hostage for nearly two years. Trump punctuated his tweets with his pet hashtag “#ENDENDLESSWARS,” a further sign that he wants to pull US troops out of Syria.

The olive branch will have sowed further confusion in the minds of the United States’ Syrian Kurdish allies who staged noisy protests along the Turkish border today, many vowing to resist the Turkish army with their lives if need be as their commanders prepared for all-out war.

Trump was accused of betraying the Kurds when the White House announced Sunday that US troops would withdraw from the Syrian border to let Turkish troops in.

The ill worded statement was taken as a green light for a Turkish invasion, triggering uproar on the Hill and beyond, as senators and congressmen aired their fury at the perceived abandonment of the Syrian Democratic Forces (SDF). Administration officials have since gone into full spin mode, telling reporters that “nothing has changed” and that some 1,000 US forces will stay the course.

Trump denied he was betraying the Kurds today, saying, “We may be in the process of leaving Syria, but in no way have abandoned the Kurds, who are special people and wonderful fighters.”

It remains unclear whether Trump’s invitation will prompt Turkey to hold off sending its forces in and around the towns of Tell Abyad and Ras al-Ain, where Turkey has long pressed to put boots on the ground. If anything, it will be read as Washington caving to Turkish pressure, yet again.

Around 100 US forces were said to have vacated their Forward Operating Bases in the mixed Kurdish-Arab towns yesterday, in keeping with Trump’s orders. And there is no indication that they will return anytime soon.

Turkey’s Vice President Fuat Oktay said Turkey would continue with its plans to set up a safe zone today, saying, “Where Turkey’s security is concerned, we set our own path and limits.”

The Ministry of Defense chimed in with a series of tweets, saying a safe zone inside the Kurdish-controlled northeast border area “is essential for the stability and peace of our region and for Syrians to be reunited with a secure life.”

The ministry also tweeted photos of Turkish soldiers in action, captioned “The heroic Turkish Armed Forces are the sole coalition and NATO member army that has fought the Islamic State on the ground in the Euphrates Shield zone.” It was referring to the area west of the Euphrates River the Turkish army has jointly run with Sunni opposition rebels since August 2016.

The aim of the tweets is apparently to repackage Turkey's planned intervention as targeting IS as well. This will be a hard sell as the Kurds, backed by American air power, dealt the final blow to the jihadist “caliphate” in March, losing some 11,000 men and women along the way. IS cells that have begun regrouping are doing so principally in Deir ez-Zor, which is not in close vicinity of the Turkish border.

The safe zone, or “security mechanism,” as the United States prefers to call it, is part of an ongoing effort to appease Turkey’s security concerns not over IS but the People’s Protection Units (YPG). The Syrian Kurdish force is the core element of the SDF, which also contains a large number of Arabs.

Turkey calls the YPG a terror group because of its close links to the Kurdistan Workers Party (PKK). The rebel group has been fighting the Turkish army since 1984, initially for Kurdish independence and then for autonomy. However, the YPG has never attacked Turkey unprovoked.

Aid agencies are warning of a humanitarian crisis should Turkey intervene. The International Rescue Committee said a military offensive could displace at least 300,000 people depending on its scale. Save the Children, a British aid outfit, said there are 1.65 million people in need of humanitarian assistance in the area, including more than 65,000 displaced by the war.

Mazlum Kobane, the unflappable SDF commander, lobbed a bombshell of his own today. “We are considering a partnership with Syrian President Bashar al-Assad, with the aim of fighting Turkish forces,” he said. If Assad accepts the offer he would revive an alliance struck by his father and predecessor Hafez with the PKK in the 1980s that ended when Turkey threatened to go to war against Syria in 1998.

But there are few signs for now that the younger Assad will do so. Salih Musim, the spokesman for the YPG’s political wing, the Democratic Union Party, told Al-Monitor in an interview yesterday that the regime had rebuffed the Kurds’ earlier overtures. “They are not interested in dialogue; they just want to crush us again,” he said, because the regime thinks it's won the war and is playing the long game, waiting for the United States to withdraw before it pounces. Muslim said Washington’s wobbles have encouraged such calculations, leaving the Kurds more vulnerable than ever.

Haid Haid is a research fellow at the International Center for the Study of Radicalization at King’s College, London. He told Al-Monitor, “It does not seem that the regime is planning to enter a direct military confrontation with Turkey, especially when neither of its allies, Russia and Iran, is willing to support such a fight.”

Haid continued, “During previous negotiations, the regime was pushing for a deal that allows it to restore its authority over the SDF areas without major compromise. In addition, the regime has been only offering the SDF one option, which is the reintegration of the SDF and other affiliated security forces into the state’s regular armed forces.”

Syria’s deputy foreign minister renewed the calls in comments carried by the pro-regime Al Watan today. Faisal Mekdad urged the Kurds to return to the government rather than “plunge into the abyss.”

But the Syrian Kurds still have cards to play. They control Syria’s biggest dams and oil fields and Kobane may well now ignore US pressure to stay away from Assad and seek to use these assets to bring energy-starved Damascus to the negotiating table. US sanctions on the shipping network run by Iran’s Islamic Revolutionary Guard Corps has hit Syria hard, giving the SDF further leverage.

Hundreds of trucks already carry crude oil produced in SDF-held territory daily to regime-held territories and to the Kurdistan Regional Government in Iraq through the Walid border crossing. Western officials estimate that a quarter of the oil produced in the SDF-controlled fields makes its way to the KRG.