US President Donald Trump's announcement catches Pentagon, State Department and Syrian Kurds off guard as Turkey assumes a primacy of sorts in the president's thinking despite the S-400 fiasco. 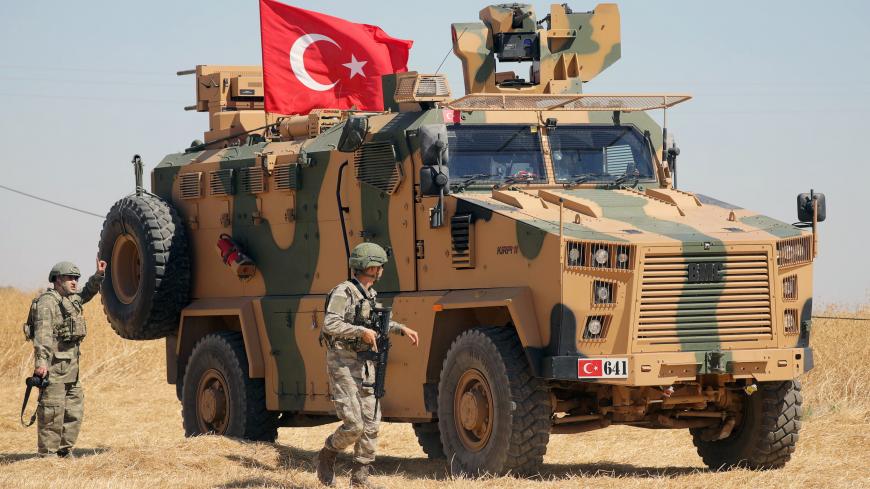 A Turkish soldier walks next to a Turkish military vehicle during a joint US-Turkey patrol, near Tel Abyad, Syria, Sept. 8, 2019. - REUTERS/Rodi Said

US forces began withdrawing today from two Kurdish-controlled towns in northern Syria to make way for the entry of Turkish troops in what the Kurds are calling “a historic betrayal” by the United States, but rather seems like just more confusion enveloping the Donald Trump administration’s Syria policy.

“US forces are vacating their positions in Tell Abyad and Ras al-Ain,” a senior official for the US-backed Syrian Democratic Forces (SDF) told Al-Monitor on condition of anonymity. He called the move “utterly unexpected” and said it was not in keeping with US pledges to keep Turkish troops out of the Kurds' self-administered zone. “If Turkey invades, the Kurds will fight back,” the SDF official vowed.

As Al-Monitor went to press, the Turkish Foreign Ministry issued a statement suggesting it would cross into northern Syria. "At this stage, the promises of the US military authorities have not been kept. In the process, the US security establishment increased its engagement with the PYD/YPG instead of ending it, an approach contrary to the current allied relationship with our country.” The statement continued that Turkey would rid the area east of the Euphrates from "terrorists," and that Erdogan had made this clear in his telephone conversation with Trump.

It's not just the Kurds who were caught off guard. The Pentagon was also blindsided by President Donald Trump’s decision to allow Turkish troops to enter the US-protected zone. The withdrawal was announced by the White House in a brief statement late Sunday following a telephone call between Trump and Turkish President Recep Tayyip Erdogan.

Confusion within the administration was palpable as it scrambled to play down the withdrawal. One official said that there was “no change in our military posture” and that Turkey had been taken off the air tasking order in Syria. Senior State Department officials told reporters in a briefing today that the planned Turkish incursion was “a very bad idea” and that a very few troops — this figure was later placed at between 50 to 100 by an administration official — were moved to get them out of harm’s way and to ensure the United States was not perceived as being complicit in a Turkish incursion the president “opposed.”

Yet Trump did not sound opposed in the least, suggesting in a series of tweets that what happened in Syria was no longer the United States’ business and enough taxpayer money had been spent on “endless and ridiculous wars” inherited from the Obama administration. It was time to "bring our soldiers home,” Trump said, adding it was now up to Turkey, Russia, the Kurds and Europe to “figure the situation out.”

But then a few hours later, as the protests grew louder, Trump waded in with a fresh tweet threatening “to totally destroy and obliterate the economy of Turkey” if “Turkey does anything that I, in my great and unmatched wisdom, consider to be off limits.” Trump had made similar threats in January, pushing the Turkish lira further down.

Ankara has not yet responded to the Trump salvos. But if anything, they will likely sharpen anti-American sentiments in Turkey and in turn bolster popular support for the Turkish government’s continued repression of its own Kurds — and its rapprochement with Russia.

Syria’s Kurds, who took the lead role in defeating IS, insist that whatever happens, they will not allow Turkish troops to enter their territory. “We would rather die honorably than allow Turkish troops to invade our lands,” Salih Muslim, spokesman for the Democratic Union Party, which is closely linked to the SDF, told Al-Monitor in a telephone interview.

Muslim said Turkey’s presence would bolster the Islamic State (IS) “because they are allies and everybody knows this.” Turkey has been long accused of negligence if not outright complicity as thousands of foreign IS fighters flocked to Syria through Turkey and mainly through Tell Abyad until the town was captured by the Syrian Kurds with US help in 2015.

Now thousands of those fighters are in Kurdish custody and the SDF is threatening to redeploy its forces guarding over them to the Turkish border in preparation for a Turkish invasion.

The paradox is that Turkey’s talk of a full-scale invasion of the Kurdish area is more likely just that, talk. But it has helped Ankara’s allies within the Trump administration who believe the relationship with Turkey is too valuable to sacrifice on behalf of the Kurds to push for concessions on Ankara’s behalf. And so Erdogan keeps threatening to push for more, in this case to establish a military presence in the US-protected zone.

A so-called security mechanism established between Ankara and Washington that took effect last month was supposed to stave off Turkish forces through a series of confidence measures, mostly at the Kurds’ expense. These included joint US-Turkish patrols on the ground and in the air.

“The United States asked us to dismantle our fortifications, block our tunnels, withdraw our heavy weapons and our forces as part of a safe zone agreement, and we did this because we were told it was the only way to keep the Turks out,” the SDF official said. “Now they are being invited by America to come in."

Tellingly, Trump shared tweets saying that under President Barack Obama, the United States had aligned not with the Kurds but with the Kurdistan Workers Party (PKK), which has been fighting the Turkish army since 1984. This is Ankara’s key talking point because the SDF is dominated by the Kurdish force known as the People’s Protection Units (YPG), a PKK offshoot. Turkey wants the United States to end its partnership with the YPG, saying it is the same thing as the PKK, which is on the United States’ list of terrorist organizations.

Erdogan has repeatedly threatened to invade the Kurdish-controlled region unless the United States complied with Turkey's demands to remove the YPG from a 35-kilometer (19-mile) deep zone running east of the Euphrates all the way to the Iraqi border.

Turkey also wants to resettle at least a million Syrian refugees in that area. The Kurds say this is part of a Machiavellian scheme aimed at diluting the Kurdish presence by inserting Syrian Arabs displaced by the conflict from other parts of the country. It is also meant to ease Turkey’s own Syrian refugee burden. In today's briefing, a State Department official called the resettlement plan "probably the craziest idea I've ever heard."

Today’s uproar, with senior administration officials taking turns to emphasize they are opposed to a Turkish invasion and top Republicans such as Senate Majority Leader Mitch McConnell weighing forcefully against any withdrawal, will likely undo the thaw in US-Turkish relations that came with the launch of the security mechanism. Or so Turkey’s advocates within the administration will likely argue. Had the White House not advertised the withdrawal from Tell Abyad using language that suggested that the United States was leaving altogether, today's crisis would likely not have erupted, and Turkey's slow insertion into the Kurdish-controlled zone would have continued unhampered, a US official speaking on condition of anonymity told Al-Monitor.

Amid all the bloviating on the Hill — and the Twittersphere — there is an emerging pattern of Turkey taking precedence for the administration over the YPG-led Kurds. Turkey is being accommodated, just not at the pace of Trump’s tweets.

Take the UN-backed constitutional committee for Syria that will convene in Geneva for the first time Oct. 30. Washington has said nothing about the exclusion of the PYD.

Turkey has yet to be sanctioned for acquiring Russian S-400 missiles or for helping Iran bust US trade sanctions by facilitating an illicit oil-for-gold scheme through Turkish state lender Halkbank.

Muslim said the lack of US coherence plays into the hands of Syrian President Bashar al-Assad and his Russian and Iranian allies. All three want the United States to leave Syria and with US forces out they can eventually eject Turkish troops in Afrin and Jarablus as well. But not before Idlib, the northwestern province held by the jihadist group Hayat Tahrir al-Sham, is captured by regime forces, Muslim speculated.

Numerous other Kurdish officials interviewed by Al-Monitor said faith in the United States had already been shaken by Trump’s announcement in December to withdraw all US forces from northern Syria in 30 days. He retracted the decision under fierce pressure from the Pentagon and the Congress. US troops will remain, at least for now, but don’t expect any to return to Tell Abyad or Ras al-Ain any time soon.