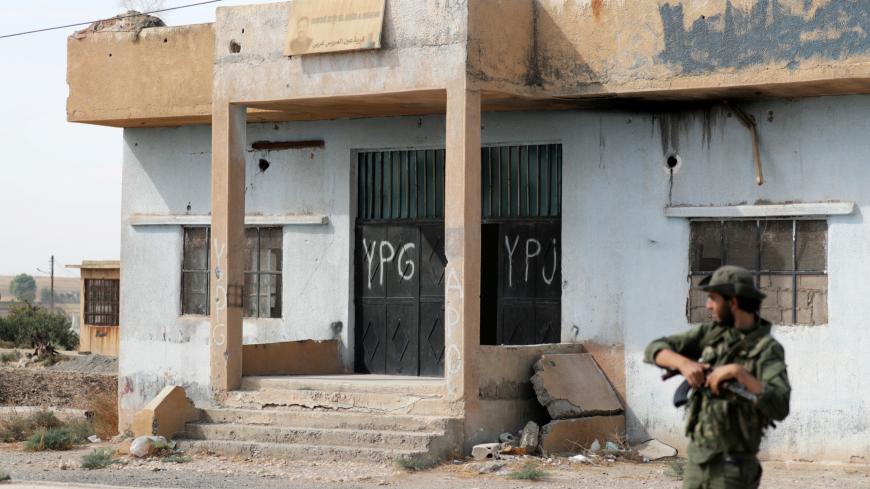 A Turkish-backed Syrian rebel fighter stands near a former office of the People's Protection Units (YPG) at the entrance of Tell Abyad, Syria, Oct. 14, 2019. The predominantly Kurdish YPG, which Turkey considers to be an enemy, was a key element in the US effort to defeat the Islamic State in Syria. - REUTERS/Khalil Ashawi

The move came after US President Donald Trump said he would issue an executive order authorizing “powerful additional sanctions” against Turkish officials, such as financial penalties, blocking property and stifling their entry into the United States.

“Turkey’s military offensive is endangering civilians and threatening peace, security, and stability in the region,” Trump said today. “I have been perfectly clear with [Turkish President Recep Tayyip] Erdogan: Turkey’s action is precipitating a humanitarian crisis and setting conditions for possible war crimes.”

Trump has touted taking down the territorial caliphate of the Islamic State (IS, also known as ISIS) in Syria as a signature foreign policy accomplishment, one which current and former officials say the Turkish incursion has put at risk. “Turkey must not put these gains in jeopardy,” Trump said

The American president also said the forthcoming order would increase steel tariffs against Turkey to 50% and stop negotiations toward a potential $100 billion trade deal with Ankara. Al-Monitor reported today that Erdogan was one official under consideration for sanctions.

The decision to move forward with sanctions comes after the White House faced intense pressure on Capitol Hill last week from both Democratic rivals and Republican allies, including Sen. Lindsey Graham, R-S.C., to impose harsh penalties on the Turks. Graham promised “sanctions from hell” after he and Sen. Chris Van Hollen, D-Md., floated an extensive suite of penalties.

Trump’s statement struck a starkly different tone from his language in recent days, as the president announced a pullout to the al-Tanf garrison on Syria’s southwestern border with Jordan and Iraq, which Al-Monitor reported Sunday.

While the president called for Turkey to protect civilians and religious and ethnic minorities amid the assault, in tweets sent today, Trump left that responsibility in the hands of the Syrian government that the US has repeatedly condemned for human rights violations and war crimes.

“After defeating 100% of the ISIS Caliphate, I largely moved our troops out of Syria,” Trump wrote. “Let Syria and Assad protect the Kurds and fight Turkey for their own land.”

But as US officials noted a deteriorating situation, with Turkey threatening to overrun the city of Manbij and releasing IS detainees into northern Syria, experts said the Trump administration appeared to be losing control of the gains of the five-year fight against IS.

“Instead of crafting policy to ensure the safeguarding of the IS fighters in detention, the tens of thousands in displaced persons camps and ensuring IS did not resurge, we have create a situation where IS is already escaping, sleeper cells are being activated, [and] our partner force is completely vulnerable,” said Lizy Dent, a former adviser for the Global Coalition to Defeat ISIS and now a nonresident fellow with the Middle East Institute. “The optic is we are being forced out."

Late today, Defense Secretary Mark Esper said in a statement that he planned to press NATO countries to take "collective and individual diplomatic and economic measures" against Turkey at a meeting in Brussels next week, after he threatened Ankara's role in the alliance in TV appearances Sunday. "President Erdogan bears full responsibility for its consequences, to include a potential ISIS resurgence, possible war crimes and a growing humanitarian crisis," Esper said. "The bilateral relationship between our two countries has also been damaged."