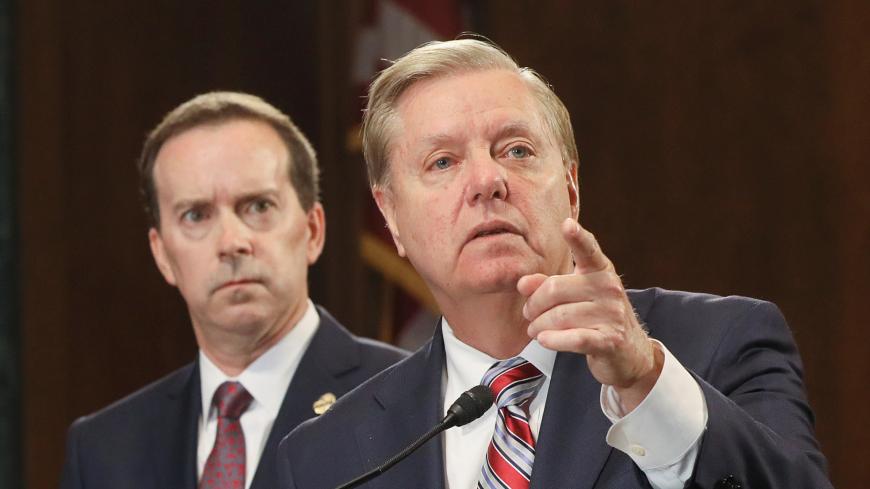 US Senate Judiciary Committee Chairman Lindsey Graham (R-S.C.) holds a news conference to discuss immigration legislation and the US-Mexico border on Capitol Hill in Washington, US, May 15, 2019. - REUTERS/Jonathan Ernst

President Donald Trump’s green light on Sunday for Turkey to attack Kurdish-held areas in northeastern Syria has generated widespread condemnation from political allies and rivals alike on Capitol Hill while opening the door for Democratic presidential candidates to hit him on foreign policy.

Trump’s hawkish allies in Congress immediately warned that the decision to abandon the Kurdish-majority Syrian Democratic Forces (SDF) would pave the way for the return of the Islamic State (IS) and asserted that withdrawing troops from the Turkish border is a boon for Iran and Russia.

One such ally, Sen. Lindsey Graham, R-S.C., vowed to partner with Sen. Chris Van Hollen, D-Md., to introduce legislation sanctioning Turkey and calling for its expulsion from NATO if Ankara moves ahead with its planned offensive. Graham also vowed to introduce a nonbinding resolution opposing the withdrawal, noting that he expects it to “receive strong bipartisan support.”

Shortly after Graham’s announcement, the SDF’s envoy in the United States, Sinam Mohamed, also called on the Senate to pass a resolution opposing the border withdrawal.

“We will be facing a grave humanitarian disaster if the Senate does not make a resolution to stop it,” tweeted Mohamed. “Don’t allow a repeat of the Turkish invasion of Afrin.”

Sen. Marco Rubio, R-Fla., also characterized Trump’s decision as “a grave mistake that will have implications far beyond Syria,” arguing that “it would confirm Iran’s view of this administration.”

Another hawk, Rep. Adam Kinzinger, R-Ill., lambasted Trump for using “endless wars” as talking points and criticized him for ordering “America to once again abandon our friends and give Russia [and] Iran exactly what they want.”

Iran hawks issued similar warnings in December after Trump threatened to pull all US troops out of Syria before gradually slow-walking the withdrawal throughout the year.

The Senate passed a nonbinding resolution 70-26 in February warning against a “precipitous withdrawal” from Syria and Afghanistan. But every Democratic presidential candidate in the chamber except Michael Bennet, D-Colo., voted against the symbolic measure. Still, several of those candidates wasted no time today in condemning Trump for yielding to President Recep Tayyip Erdogan’s plans to oust the Kurds from the border.

“I have long believed the US must responsibly end our military interventions in the Middle East,” tweeted Sen. Bernie Sanders, I-Vt. “But Trump’s abrupt announcement to withdraw from northern Syria and endorse Turkey’s incursion is extremely irresponsible. It is likely to result in more suffering and instability.”

Similarly, Sen. Elizabeth Warren, D-Mass., endorsed withdrawing US troops from Syria, but called Trump’s decision “reckless and unplanned,” adding that it “undermines both our partners and our security."

Sen. Kamala Harris, D-Calif., also said Trump’s decision is “a betrayal of our ally in the fight against [IS] and risks American lives.” Her fellow candidate, Julian Castro — a former Housing and Urban Affairs Secretary — also accused Trump of abandoning “our Syrian and Kurdish allies to Turkey, Russia, Iran and the Assad regime.” The billionaire hedge fund manager Tom Steyer, another 2020 hopeful, said Trump is siding “with an authoritarian over allies who have been by our side for over a decade.”

As per usual, Trump took to Twitter to defend his decision amid the bipartisan backlash. Despite greenlighting Erdogan’s offensive on Sunday, Trump vowed to “totally destroy and obliterate the economy of Turkey” if Ankara does anything he deems “off-limits.” Erdogan has proposed resettling millions of Syrian refugees currently residing in Turkey to northeast Syria after the offensive — a plan widely panned by human rights groups.

Trump also reiterated the White House statement from Sunday, which noted that “Turkey will now be responsible for all [IS] fighters in the area captured over the past two years” and that “the United States will not hold them for what could be many years.”

The SDF currently holds more than 10,000 IS prisoners with US backing. When Trump first announced a full Syria withdrawal in December, they threatened to release the prisoners. And while the president is not keen on committing resources to deal with the former IS fighters, Congress has other ideas.

The Senate’s annual defense authorization bill has a provision to expand assistance to the SDF for the “temporary detention and repatriation” of foreign IS fighters. Despite Trump’s repeated efforts to slash Syrian stabilization aid, the Senate’s annual foreign aid spending bill would allocate $25 million for programs in northeast Syria.