Trump may have lifted sanctions on Turkey, but Democrats and Republicans alike still want to slap Ankara with their own stringent sanctions. 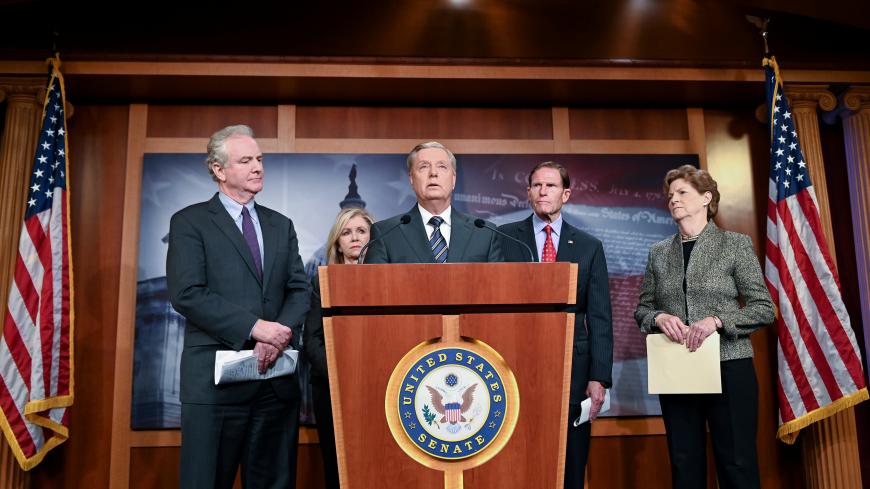 President Donald Trump deemed a success the Syria deal his administration helped broker on Wednesday and immediately proceeded to lift the sanctions he had placed on Turkey. While some of his closest allies on Capitol Hill praised the agreement, they’re still eager to work with Democrats to slap Turkey with more biting sanctions.

House Republican Conference Chair Rep. Liz Cheney, R-Wyo., who has her own sanctions legislation, also said that Congress should press ahead with sanctions after Trump’s announcement. And Senate Majority Leader Steny Hoyer, D-Md., announced that the House would vote on yet another sanctions proposal next week.

“Nothing has happened yet that will take us off the path to pass the bill,” Risch told Al-Monitor. “We are monitoring the situation, but until things stabilize, there are no plans to table the bill.” Risch released his own sanctions bill the same day Graham dropped his legislation last week.

Risch’s bill, which he introduced alongside Sen. Bob Menendez, D-N.J., contains many of the same sanctions in Graham’s legislation, which has the backing of Sen. Chris Van Hollen, D-Md.

Both bills would sanction senior Turkish officials and Turkey’s state-run Halkbank. They would also ban US arms sales to Ankara while sanctioning any country that deals with the Turkish Armed Forces until Turkey withdraws from northeast Syria.

Additionally, both bills require Trump to report to Congress on President Recep Tayyip Erdogan’s net worth and clarify that the Trump administration must sanction Turkey under the 2017 Countering America’s Adversaries Through Sanctions Act because of its purchase of the Russian S-400 missile defense system.

Unlike Risch’s legislation, the Graham bill would also extend the sanctions to Erdogan himself. That bill also seeks to sanction anyone who enables Turkey, Russia, Iran or the Bashar al-Assad government to assume control of Syria’s oil resources.

Graham notably persuaded Trump to maintain a still undetermined number of troops in northeast Syria to “secure the oil.” And while Syrian Democratic Forces leader Gen. Mazlum Kobane Abdi has publicly praised Trump for the arrangement between the Kurds, Turkey and Russia, Al-Monitor has reported that the Kurds objected to the presence of US troops in the negotiations leading up to the deal. Graham and Van Hollen have also led five senators in a letter to Secretary of State Mike Pompeo asking him to expedite the general’s visa so he can meet with Congress and Trump administration officials.

While Risch’s bill does not address Syrian oil, it does go further in several other respects. It would direct Trump to use US clout in international lending institutions, such as the International Monetary Fund and the World Bank, to prevent them from providing loans to Turkey — an idea the Foreign Relations Committee first cooked up last year in a bid to force Ankara to release US citizens and consular staff from prison.

The Risch bill also argues that Turkey’s attack on the Syrian Kurds constitutes a violation of NATO’s Article I, which requires each member of the alliance to resolve international disputes “by peaceful means.” The legislation would subsequently Pompeo to submit a report to Congress assessing Turkey’s role in NATO.

Finally, the Risch bill would prioritize Syrian Kurdish refugees for entry into the United States, potentially circumventing Trump’s travel ban targeting Syria and several other Muslim-majority countries. And while the Trump administration has set the US refugee quota for 2020 at a historic low of 18,000, the bill exempts Syrian Kurds from “any numerical limitation.”

Senate Majority Leader Mitch McConnell, R-Ky., has still not committed to putting any sanctions legislation on the floor, but Risch’s backing could increase the likelihood of a vote. Last week McConnell penned a Washington Post op-ed panning any US withdrawal from Syria as “a grave strategic mistake.”

Graham also believes that the House’s planned sanctions vote next week could put more pressure on the Senate to act.

“I’d like to sit down with House colleagues, find a set of sanctions that are bicameral and bipartisan, move forward and let Turkey know that if you ethnically cleanse the Kurds, if you start killing people that helped us, we’ll come down like a ton of bricks,” Graham told Al-Monitor.

The House bill, introduced by House Foreign Affairs Committee Chairman Eliot Engel, D-N.Y., and top Republican Mike McCaul of Texas, includes the arms sales ban and sanctions on the Turkish Armed Forces as well as the Halkbank and S-400 sanctions. It also requires the report on Erdogan’s net worth but does not sanction Erdogan himself and does not include Graham’s Syrian oil language.

McCaul touted the bipartisan bill as a “very targeted” and “measured” approach, in an interview with Al-Monitor. Still, it could face opposition from Republicans who support Trump’s recent Syria decisions and progressive Democrats who believe that the sanctions are too broad and unlikely to alter Turkey’s behavior.

“Too often, US policymakers are quick to place sanctions on regimes we disagree with, without considering the likelihood of success or the humanitarian consequences,” wrote Omar.