Egypt organizes its first beekeepers festival, but small producers wonder whether their presence will make a buzz. 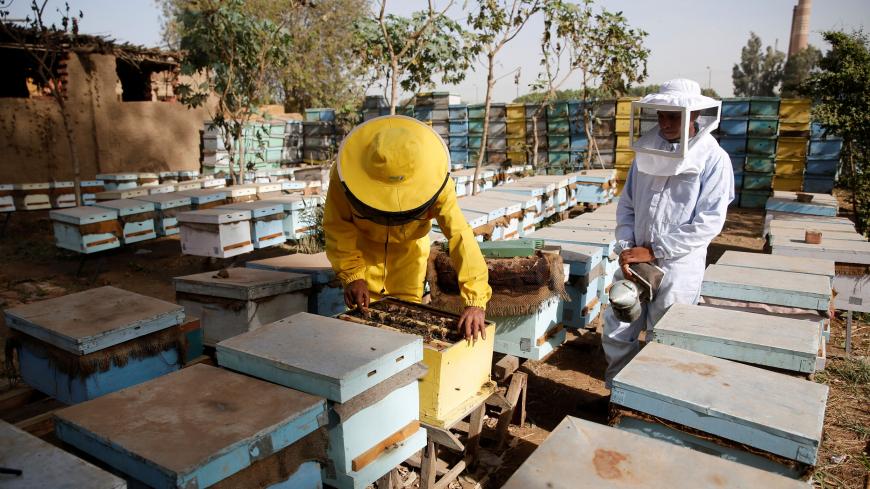 CAIRO — Can Egyptians — huge consumers of saturated sugar — switch to honey? The organizers of Cairo’s first honey festival next week certainly hope so.

“Egyptians are major consumers of sugar, especially in jams and halva, [which are saturated sugar],” Mahmoud Hassan, chairman of MEDmart, which organizes the festival, told Al-Monitor. “We want to change that culture and get them to use honey — which is a healthier alternative — as one of the main ingredients at the Egyptian table. The festival will feature chefs cooking dishes with honey as a substitute for sugar.”

The Egypt Honey Festival, set to take place Oct. 16 at the Merryland Park in Cairo’s Heliopolis, aims to combine entertainment with business. The public program will have workshops with chefs, exhibitions and children’s events, and aims to present the health and nutritional benefits of honey as a natural immunity booster.

According to the festival’s website, the consumption of honey in Egypt and the Arab world in general does not exceed 100 grams annually, unlike European citizens who consume more than 2 kilograms annually.

Honey production in Egypt takes place all year long due to the moderate climate that is favorable to beekeeping,” Hassan told Al-Monitor. “We organized the festival in cooperation with the Arab Beekeepers Union to boost direct communication between honey producers and consumers, and also among the producers themselves. We also want to introduce young people to the beekeeping industry and its economic feasibility.”

Hassad said an entrepreneur can start bee production with 200 hives at a cost of $6,000 — a low cost for a startup business.

He explained that the festival will also have children’s games and activities, including a simplified full-day workshop called “The Young Beekeepers’ Program.” The workshop will illustrate the basics of beekeeping and honey production in a small apiary to teach children how to deal with bees. There will also be concerts and a competition for recipes using honey, which will be posted on the festival’s Facebook page. The prizes consist of bee products to encourage the public to devise new ways to use honey.

The first edition of the festival will have 50 exhibitors, mostly Egyptians but also from Lebanon, Libya and Oman. The organizers hope for a larger international presence next year. “The participation fee for three days is $90 for a small booth, where small beekeepers can display their products,” Hassan said. Most of the larger companies are opting for larger areas of two or three square meters, which cost $300 and $600, respectively.

Fathy Behery, president of the Arab Beekeepers Union, told Al-Monitor the union is a professional association that was established in 1994 with membership all across the region. The union also wants to draw in small beekeepers.

“The union addressed the beekeepers associations in all governorates to invite small beekeepers to display their products in the festival,” Behery said, explaining that the union has signed a protocol with the Agricultural Bank of Egypt to provide soft loans to small beekeepers.

“This would ensure the continuity of work in this sector, which is one of the most promising economic activities. The festival will open channels of communication among small beekeepers and large companies for exporting the surplus of their products to Arab countries. After its first session, the festival intends to become a global tourist attraction,” he added.

Some of the small producers remain skeptical. Moataz Bellah Mohamed, who owns apiaries known as Salaf al-Saleh, told Al-Monitor he would not participate in the festival because he does not believe it can help small beekeepers.

“The (large) companies will get large areas and make dazzling presentations of their products and give discounts to consumers, while small exhibitors will be confined to an area of ​​60 square centimeters to display their products.”

Mohammed Hassan, another beekeeper, said the festival should be limited to small beekeepers who have the commercial stamp on their production. “Participants should hold a certificate of (laboratory tests) from the Ministry of Agriculture on the honey quality,” he said, complaining that large companies often destroyed the nutritional value of honey to prevent granulation. “Major companies that store large quantities of honey heat their products to prevent granulation, which is a natural phenomenon. This causes honey products to lose their nutritional value. There isn’t sufficient state provision to prevent this practice.”

Iman Ramadan, head of a large honey production company called Konoz, told Al-Monitor there are many ways to tamper with honey for cheaper costs. “Honey produced in the Nile Delta includes 5% of sucrose, while honey in Upper Egypt includes 7% of sucrose due to the presence of cane farms. Some companies mix these two types of honey despite their different prices to reduce the rate of sucrose,” he said.

“Another example is storing honey for a year to get sucrose to settle at the bottom before allowing any sample to be tested. The sucrose test would, in this case, show a suitable rate. Stored honey, however, has no nutritional value as it loses its MHF substance,” he added.

Art and entertainment
Start-ups and entrepreneurship