Why is Russian military skeptical about US claim of Baghdadi's killing?

The Russian military's incredulity about the US raid that killed Islamic State leader Abu Bakr al-Baghdadi has some basis in practical reasons that go beyond just "great power jealousy." 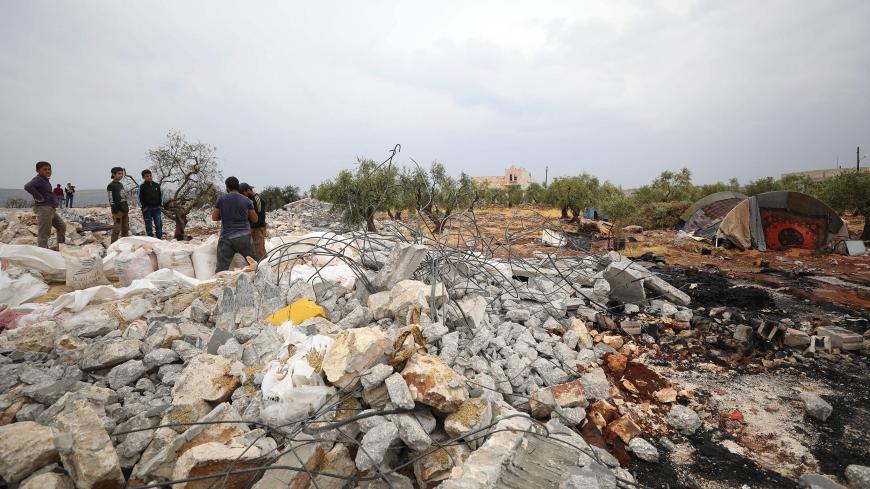 Syrians sift through the rubble at the site of a suspected US-led operation against Islamic State chief Abu Bakr al-Baghdadi over the weekend at the edge of the small Syrian village of Barisha in the country's opposition-held northwestern Idlib province, Oct. 28, 2019. - OMAR HAJ KADOUR/AFP via Getty Images

Russia’s Defense Ministry has cast doubt on US claims of killing Islamic State leader Abu Bakr al-Baghdadi despite the evidence of his death from Turkey, an Astana format partner, and Iraq’s joint intelligence-sharing center.

Maj. Gen. Igor Konashenkov, the chief of media services for the Russian Defense Ministry, said, “The escalating number of direct participants and countries that supposedly took part in the ‘operation,' each one with completely contradictory details, justifiably raises questions and doubts about whether it happened, never mind succeeded.”

Konashenkov said the military was not aware of any alleged Russian assistance for the passage of American flights into the airspace of the Idlib de-escalation zone during the Baghdadi operation. Trump, however, thanked Russia for opening up airspace in Syria for the strike.

Moreover, the Russian Defense Ministry questioned the idea that Baghdadi had found shelter in an area controlled by Jabhat al-Nusra.

“Jabhat al-Nusra always uncompromisingly exterminated any IS representatives on the spot as the main rivals for power in Syria. Therefore, the fact that the former IS leader could be quietly hiding in territory controlled by Syrian al-Qaeda demands at least some direct evidence from the United States or other participants in the operation,” Konashenkov said.

The Kremlin at first referred the media to Konashenkov’s statement only to have spokesman Dmitry Peskov say the next day that the Russian military had spotted a flurry of US activity on the ground. “Indeed, our officers saw US planes in the area; they saw drones in the area that could have been working there,” he said Oct. 28.

“If this information about Baghdadi’s death is really confirmed, then in general we can speak of a serious contribution by the US president to the battle against international terrorism,” he added.

All this begs a question. Why did the Defense Ministry give such a skeptical response to the information confirmed by its partners and why would the Kremlin then make a U-turn in the Russian position?

First, it was the Russian Defense Ministry that in 2017 claimed to have eliminated Baghdadi in such a pretentious but groundless way that even Russian Foreign Minister Sergey Lavrov was quick to smooth over the situation and say there was no hard evidence of the IS leader’s death. The Russian military had had enough time then to verify the facts, as the announcement came two weeks after the alleged airstrike and several days after the Syrian state media reported the death of the terrorist chieftain in a bombing raid on Raqqa. At the same time, it is not unprecedented for Russia and the United States to challenge each other’s role in killing top-tier IS leaders. In 2016, the death of Abu Mohamed al-Adnani, an IS spokesman and overseas plotter, also raised the “who” question, but the two countries’ militaries confirmed his elimination just several hours apart.

Second, the Russian Defense Ministry seeks to downplay the achievements of the US-led international coalition in Syria. As early as the eve of the special operation, Oct. 26, the Russian military accused the United States of smuggling Syrian oil, which allegedly boosted the revenues of American private military contractors and intelligence services. In his Oct. 27 appearance, Konashenkov said, “Since the final defeat of the Islamic State by the Syrian government with the support of Russian air power in 2018, the umpteenth ‘death’ of Abu Bakr al-Baghdadi has no operational significance for the situation in Syria nor for the actions of the remaining terrorists in Idlib.”

Thus, Moscow apparently still seeks to retain its monopoly on the real anti-terror fight and is outspokenly critical of what it sees as US double standards. The ministry is known to have repeatedly leveled public accusations at the Americans for retraining former IS fighters in order to “destabilize the situation.” Earlier, the Russian Foreign Ministry spoke about the probable transportation of militants from Syria to Afghanistan and voiced concerns that “unidentified helicopters, most likely helicopters to which NATO in one way or another is related, fly to the areas where the insurgents are based.”

Third, the ministry’s formal acknowledgement of the successful operation would be tantamount to the admission that the Russian and Syrian special services failed to prevent Baghdadi and his family from crossing the Turkey-controlled area, quite likely via territories over which the Syrian regime's army holds sway. There also was the case where Abu al-Hassan al-Muhajir, Adnani’s successor as IS spokesman, was killed Sunday while riding in a tanker truck in the Jarablus region in the zone of Turkey's Operation Euphrates Shield. The killing was reported by the SDF. Why didn't the Russians and the Syrian regime get to Muhajir first?

The deaths of Baghdadi and Muhajir could possibly show the effectiveness of the Baghdad coordination center. Yet if Baghdadi’s whereabouts had become known because of information his captured aide Ismael al-Ethawi gave to Iraqi security forces, it invites an obvious question for the Russians about the exchange of sensitive information within such a small anti-terrorism coalition of Russia, Syria, Iran and Iraq. Previously the Russian military has indicated that it was happy about the performance of the center.