How the IDF is plotting Islamic State's next move

Israeli intelligence expects the Islamic State to relocate after it loses the battles over Mosul and Raqqa. 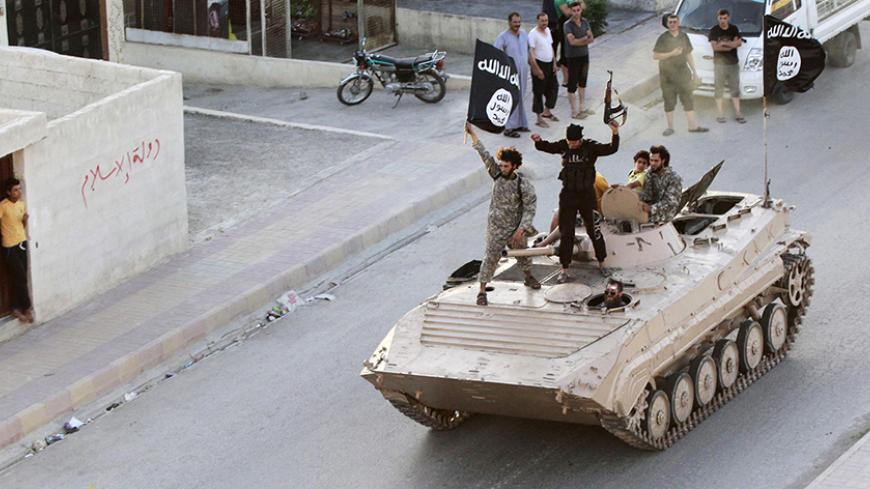 The intelligence arm of the Israel Defense Forces (IDF) disagrees with the assessment recently heard coming from the mouths of the Iraqi army’s top brass: Abu Bakr al-Baghdadi, leader of the Islamic State (IS), is currently in Mosul and is personally leading IS fighters in the desperate, defensive battle for the city.

“According to our appraisal, he is simply not there,” said Lt. Col. N. (name withheld), head of the Global Jihad Desk in the Analysis and Research Division of IDF Intelligence. “Regarding his exact location there are several appraisals, but we think that he is not in Mosul.”

According to Israeli intelligence, the fall of Mosul is just a matter of time, and even IS’ headquarters in Syria, Raqqa, is in danger. “The threat to Raqqa is increasing,” said the lieutenant colonel. “The Syrian Democratic Forces [SDF], which includes mainly Kurdish fighters, is approaching Raqqa and has been gaining the support of local tribes. The question we are focusing on now is, what will happen to IS on the day after Mosul and Raqqa fall?” Israel is naturally more interested in the Raqqa front, which is geographically much closer to it than Mosul, which is in the heart of Iraq.

“Who will rule Raqqa? Will it be [Syrian President Bashar] al-Assad’s regime, the Kurds, other forces together with locals?” Lt. Col. N. wondered aloud. “What kind of configuration will Islamic State have after most of its territorial assets are torn away? We have developed a research discipline in which we analyze the local forces and tribes found in each territory: with whom do they cooperate, what are their loyalties and network of interests. We map out all the things that IS needs in order to continue to cling to the Islamic State [caliphate] concept. According to these variables, we try to assess what will happen in the future.”

Talking about the Yarmouk branch, Lt. Col. N. explained, “These forces started to operate as a rebel force under the name Shuhada al-Yarmouk [Yarmouk Martyrs Brigade].” He continued, “Originally, they were a pragmatic secular militia that operated within the Free Syrian Army rebel coalition. Over time, when [IS] expanded, a Damascus district of IS was established. A group we call ‘external extremists’ arrived in the southern Golan Heights region, and these spread the [IS] spirit. They took control of the region; they imposed Sharia law and enforced [it] with an iron hand vis-a-vis the local population. They also started to recruit local activists. At that point, Shuhada al-Yarmouk changed its identity to become the Yarmouk branch of IS. They still change their name occasionally; now they are called Jish Khalid ibn al-Walid, in honor of an Islamic military leader who won a big battle in the past over the Yarmouk [River].”

Israel intelligence invests quite a bit of effort, energy and money in IS, even though the group has not been designated a major threat against Israel so far. “The Yarmouk branch numbers no more than a thousand fighters,” said Lt. Gen. N. “Some of them perform combat support duties; others are youths in their teens. The temptation is great: They receive a salary and a Kalashnikov, and they really don’t have many other choices.”

Although the Yarmouk zone is viewed as far-flung and even Assad’s regime does not invest much energy in it, IS’ Yarmouk branch has significantly grown in strength. “In recent months, they have advanced eastward and have doubled their territory,” said Lt. Col. N. “They have not succeeded in winning over the [local] population in any significant way. However, they did take control of a large territory, and today the physical size of their enclave is twice what it used to be.”

In contrast to the Yarmouk zone, IS has been rapidly shrinking with the advance of Kurdish forces in Syria and the Iraqis in Iraq. “Ever since the Russians entered the space and the coalition led by the Americans has intensified aerial attacks, IS has been losing territory quickly,” said the lieutenant colonel.

Lt. Col. N. did not provide a precise response regarding what will happen after Mosul and Raqqa fall, stating, “A caliphate is not limited to territory. We know that today, Caliph al-Baghdadi and the Shura Council are preparing caliphate 2.0, the next generation. They know what’s happening, and they are preparing for the day after. They intend on finding alternate territory for the caliphate — a more convenient area, not at the center of public attention, more remote. They want to situate the core of IS there and an infrastructure that will enable them to continue to exist physically.”

Given this assessment, Israeli intelligence is examining two options: southern Syria, adjacent to the Yarmouk zone, or the area where the Syrian and Iraqi borders intersect.

According to Lt. Col. N., who is privy to key information held by Israeli intelligence on IS, the chances are low that the organization will move to southern Syria, because the group would find it extremely difficult to maintain itself and fund its operations because of the low level of infrastructure in that area, almost devoid of income.

“By contrast, the juncture of the Syrian-Iraqi borders has civil-economic foundations,” the lieutenant colonel observed. “There are crude oil fields and [natural] gas, still being produced. A takeover of this region would allow IS to continue its military activity and its powers of governability, with the option of financing the continuation of the global jihad.”

The goals and concepts of IS still exist and continue to win over hearts and minds in the Muslim world, although enthusiasm is waning.

“There is a significant drop in volunteers and in the flow of new forces,” Lt. Col. N. asserted. “In May 2016, key deputy caliph and IS spokesman [Abu Mohammed] al-Adnani made a speech in which he called on foreign activists not to continue to immigrate to caliphate territory but to remain in the ‘Crusader countries’ and carry out terror attacks there. But several things have changed since then. Adnani was killed in the meantime, and his heir, [Abu al-Hasan] al-Muhajir, delivered a fiery speech at the beginning of April this year in which he called on activists to come to the territories of the caliphate. Evidently they are short on manpower and starting to feel the lack of combat fighters. We see that deep in southern Syria in desert areas, places that formerly had a large [IS] presence, forces have been withdrawn to protect more important assets in the north. The general trend is of reduction, decline and shriveling. Nevertheless, we are far from proclaiming the demise of [IS].”