The Islamic State celebrates its first year anniversary amid military and strategic successes, while its regional and international enemies remain ever more confused. 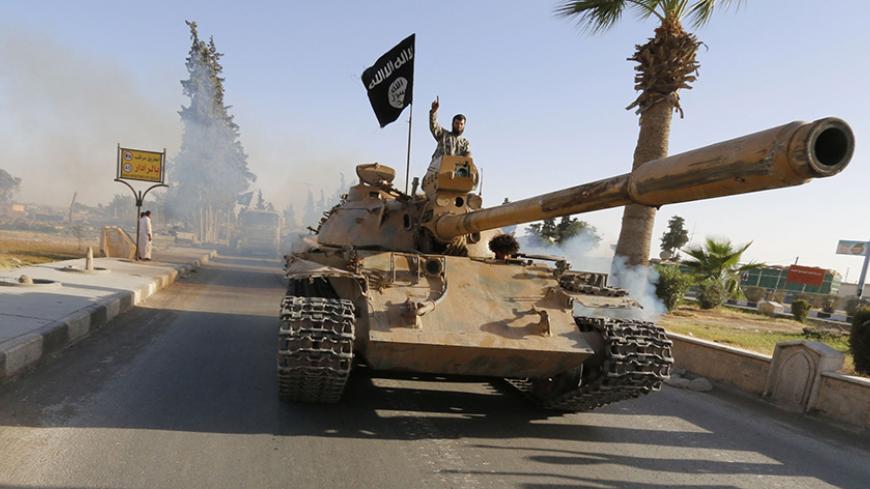 Militant Islamist fighters on a tank take part in a military parade along the streets of northern Raqqa province, June 30, 2014. - REUTERS/Stringer 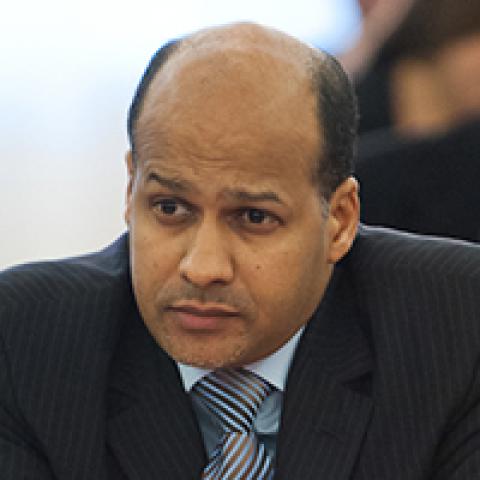 Abu Mohammed al-Adnani, the spokesman of the Islamic State of Iraq and Syria (ISIS), released a statement on June 29, 2014, in which the organization announced that it was becoming "the Islamic State" (IS) and re-establishing the Muslim caliphate under the leadership of "Caliph Ibrahim," Abu Bakr al-Baghdadi. A few days later, on July 4, Baghdadi delivered a victory sermon from the mosque in Mosul, a city he and his storm troopers had earlier wrestled from Iraqi soldiers on June 10. Three main lessons can be drawn since these events a year ago: IS had a very good first year; there is an absence of any cogent regional or international strategy to oppose the group; and there are long-term consequences of the transformations taking place in the Levant at the hands of IS.

The fall of Mosul, the second-largest city in Iraq, was both the culmination of a blitzkrieg campaign IS had started in winter 2013 in Iraq and in Syria, seizing the city of Raqqa in May of that year, and the prelude to a wider strategic phase to deepen and expand the group’s dominance. Over the past year, IS has held on to Mosul and Raqqa and, in May, captured two more cities in Iraq and Syria, Ramadi and Palmyra; governed swaths of territory over the two Levantine countries; and oversaw an economy with large-scale revenues owing primarily to oil sales from the captured Iraqi fields. Making inroads with the local tribes, shielding the residents of the cities it controls from criminality and paying salaries to its foot soldiers, IS has also displaced — not without an ongoing fight — the once all-mighty global Islamist group al-Qaeda.

In that respect, the new organization has, in the same time frame, received 21 pledges of allegiance or expression of formal support by groups around the world. Whereas al-Qaeda launched franchises over three years (2004-2007), IS could, within a year, claim provinces in Libya (Ansar al-Sharia in Derna), Nigeria (Boko Haram in Maiduguri) and Egypt (Ansar Bayt al-Maqdis in the Sinai Peninsula). It has also generated at least one new group, Jund al-Khilafah (Soldiers of the Caliphate) in Algeria in September 2014. Attacks were conducted in its name in France in January, in Tunisia in March, in Yemen in April and twice in Saudi Arabia in May. According to the United Nations, more than 25,000 fighters from some 100 countries have flocked to it from Chile to China. Finally, occupying the full spectrum of social media, the group has released near-daily, HD-quality videos with fast-paced Hollywood-style editing and video game-inspired imagery, all in multiple languages.

In the face of this impressive demonstration, regional and international policymakers have so far been unable to define a cogent strategy. Oscillating between irresponsibly ignoring the rise of the group (US President Barack Obama remarked in January 2014 that “if a jayvee team puts on Lakers uniforms that doesn’t make them Kobe Bryant”) or hastily announcing its demise (US Secretary of State John Kerry declared that the group was being “routed” on March 1), governments stuck in a post-9/11 mindset focused instead on weakening al-Qaeda or the fate of foreign fighters. There is no overstating the fact that after 14 years of global war on terror and unprecedented international investment in counterterrorism, there has been a sheer inability to properly understand, much less cogently address, the IS revolution. Yet, it is not only policymakers who have underperformed. Experts focused on either inconsequential name games (Is it ISIS, ISIL or Daesh?) or on the religiosity of the group (How Islamic is IS?) have strangely replayed the “What is al-Qaeda?” or “Al-Qaeda does not exist” headlines of the 2000s.

Meanwhile, with forward-looking Napoleonic strategic agility, extreme brutality and pronouncements of its enemies, IS is revealingly changing the landscape of the early 21st-century Middle East through tactical leverage, conquer and hold tempo, and transnational dissemination. Battling coalitions on several fronts, holding territory over two countries, fielding tens of thousands of men and, however unrealistically, planning to release its currency as announced in November 2014, IS has in a short period of time positioned itself as arguably the most powerful transnational nonstate armed group in contemporary history.

One key conclusion to be drawn from the group’s continuous advances into the Levant is that the prospect of IS’ flag flying over the Umayyad Mosque in Damascus is no longer inconceivable. For all the Syrian crisis scenarios, the run on the presidential palace looms as a permanent potential breaking news story. Should this come to pass, it would in all likelihood be won by one of the Islamist factions, such as Jabhat al-Nusra, only to be conceivably sooner or later dislodged by IS, as IS has done elsewhere. What that battle for Damascus would bring in turn, however, is the larger prospect of that most-awaited of clashes, namely IS versus Hezbollah. And in many ways, the Baghdadi versus Hezbollah’s leader in Lebanon Hassan Nasrallah showdown would logically come to encapsulate the Sunni-Shiite contest not on behalf of now militarized disintegrating states, but rather by pitting statized integrated armed groups. It is in this sense that the IS story-in-the-making has to be understood; it’s a tectonic shift partly about the new terrorism and more about a disruptive state-building project through the escalatory projection of force and violence.