The 'Caliphate Cubs' of IS

According to witnesses, the Islamic State has been recruiting children in Iraq and Syria and enrolling them in special training camps. 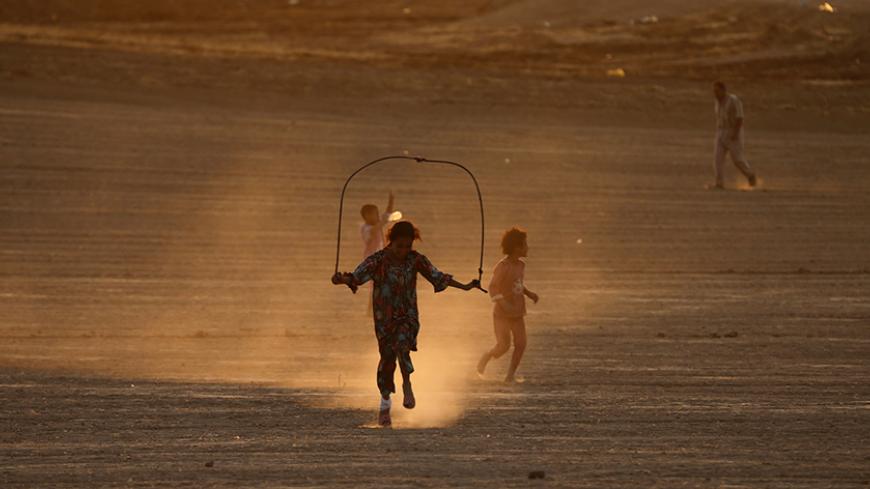 Children, who fled from the violence in Mosul, play during sunset inside the Khazer refugee camp on the outskirts of Erbil, in Iraqi Kurdistan, June 27, 2014. - REUTERS/Ahmed Jadallah

SULAIMANIYAH, Iraq — Children have lost their innocence under the rule of the Islamic State (IS). They have become machines of massive destruction that are being calculatedly and calmly gathered to produce a harsher and more extreme army of the future generation. They are also a challenge to the future fight against extremism.

Samir Abdul Aziz (a pseudonym) is a former lawyer who lost his job following IS' closure of many of the law schools in Mosul. In a phone interview with Al-Monitor, Abdul Aziz said it was difficult for him to determine the exact number of children fighting under the IS banner. However, based on information he gathered from people close to the group, he said that IS has been training child soldiers in special camps in Mosul.

“IS uses certain names to label [children's] camps, which gives the impression that they are some sort of private religious schools. The organization also calls the children fighters 'The Caliphate Cubs.' Children undergo three different levels of training in these schools. The first is religious training, whereby children are taught IS jihadi ideology and approach. Children are brainwashed into becoming hateful and ready to commit suicide. The second level is practical, as children receive harsh physical training, and are taught to use weapons. The third level is psychological: Children are taken to public squares to participate in slaughters, or are placed at the forefront of the Hisbah [religious police] sessions, or in the mosques’ sermons so as to promote their leadership skills and their sense of superiority,” Abdul Aziz said.

According to Abdul Aziz, the children's training camps are to be found in remote areas, away from the cities. IS is moving children's camps from Mosul to Raqqa and is bringing children from Raqqa, Anbar, Diyala and Kirkuk to be trained in Mosul, to isolate and distance the children as much as possible from their social environment.

IS’ training approach to teach children how to take up arms is not new. According to witnesses who spoke to Al-Monitor, the organization is using historical methods to kidnap children from their families, taking advantage of orphans, kidnapped children and sons of prisoners, turning them into slaves, before providing them with special military training so they become killing machines for those in power.

This method dates back to at least the Ottoman Empire (1299-1923). The Ottomans formed what was known as the army of Janissaries (the army of new soldiers), where children were taken from their families in childhood. They then underwent military training which turned them into loyal followers of the Ottoman sultan and a lethal weapon in the face of the sultan’s domestic and foreign opponents.

Although IS has yet to enforce conscription, whether for adults or children, it is using other methods — which are mostly based on religious incentives — to attract fighters to join its ranks and fight under its banner.

Ahmed al-Jabouri, a resident from Mosul who fled IS and came to Sulaimaniyah, told Al-Monitor about the recruitment and training operations he had heard about from his relatives.

“Since IS first took control of Mosul in June 2014, the organization has gathered hundreds of children from Mosul’s orphanages, and transferred them to unknown places. The group also includes hundreds of other children fighters coming from abroad, who are called immigrants,” he said.

“I once met one of these kids. He was Syrian and was as young as 12 years old. He was clad in black. His clothes were similar to the clothing worn by IS leader Abu Bakr al-Baghdadi when he made his first appearance back in July 2014. The young boy was at the forefront of a group that had executed a so-called apostate in one of Mosul’s streets [in February]. The boy was the one to slaughter the victim with a knife,” he added.

In March, IS published a video of execution by fire, which was carried out by a child in Syria. Moreover, all the group’s recording of killings show children accompanying executioners or carrying out the killings themselves.

According to witnesses who spoke to Al-monitor, IS senior leaders are the ones clad in black and donning black turbans, and children are encouraged to dress the same way to present IS leaders as revered leaders among the group’s fighters.

“The group has already given strict orders to its members to show ultimate respect to children, who are seen as an integral part of its structure,” Abdul Aziz said.

Al-Qaeda in Iraq (AQI) — known as the Islamic State of Iraq (ISI) after 2006 — previously established what was known as the “Birds of Paradise” organization to attract and train children.

It is still unknown whether the children who were engaged with the Birds of Paradise are now fighters in IS ranks. However, current IS members in Iraq used to belong to what can be called “al-Qaeda families.” Some of the members of these “families” joined al-Qaeda offshoots after 2003 and their sons later became part of IS, while their women joined the IS women’s division.

In addition to the local fighters, the children and women of families coming from outside Iraq and Syria to join IS have become part of the group’s main structure, who are much trusted because they are seen as “immigrants.”

IS’ capability to recruit and train thousands of children to become suicide bombers and fighters is a real threat. These children serve as an actual weapon of destruction in the hands of the organization in the future.

The United Nations Committee on the Rights of the Child (CRC) stressed the serious violations of children's rights under IS rule in Syria and Iraq.

“The militant group is using boys under the age of 18 as suicide bombers, bomb-makers, mentors, or human shields. Children with mental disabilities were used as suicide bombers. Meanwhile, minority children are detained in many areas, and sold as slaves in markets while bearing price tags,” CRC said.

According to the testimonies collected by Al-Monitor from Yazidi families who have fled Mosul, hundreds of their children are still under the mercy of IS. According to Abdul Aziz, some of these kids are likely now in the children's military camps.