Syrian Kurdish center sets out to defang 'cubs of the caliphate'

Former Islamic State child soldiers who are being reeducated at a Kurdish center face an uncertain future. 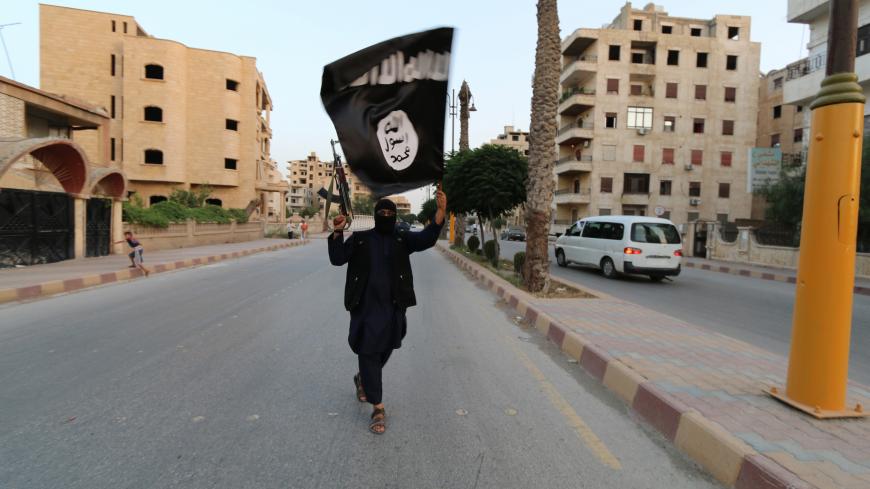 TELL MAAROUF, northeast Syria — A boy is hunched on a bunk bed, his small fingers deftly stringing macrame beads. The result is a heart-shaped key ring. On it is inscribed the word “Love.”

Nearby a pair of boys are playing Monopoly. In a communal kitchen one boy flips pancakes; others watch National Geographic TV or mill around the courtyard exchanging jokes.

Egyptians, Bosnians, French and Pakistanis. They are from across the globe, united by a dark past in which they might have been beheading people or blowing themselves up.

They are alleged “cubs of the caliphate," the child soldiers of the Islamic State (IS). The Kurdish-led autonomous administration in northeast Syria, which lost thousands of men and women in the fight against the jihadis, are now trying to “rehabilitate” around 130 boys currently housed in this low red-brick building with arches, which locals say once served as a madrassa, or Islamic school, built by the Turco-Persian Ghaznavi sheikhs.

“This one is among the most dangerous,” said Sarah Musa, a young Kurdish woman who runs the Houri Center east of the city the Kurds call Qamishlo but which is better known as Qamishli. A short boy with light brown skin and large green eyes walks into Musa’s office. He sits down next to a reporter. Throughout the interview his face remains emotionless, his body rigid and responses robotic. His name is Hassan. He is 16. He looks around 12. “I don’t care about birthdays,” he said.

He is from Deir ez-Zor. He moved with his parents, three brothers and three sisters in 2014 to Raqqa, where his father became an executioner for IS. “I am Daesh,” he told Al-Monitor, using the Arabic acronym for IS. “I was trained to fight. I was told I would go to paradise. I still believe in Allah. But I no longer pray."

Musa said a now-deleted YouTube posting showed Hassan holding a decapitated head. “When Hassan first came here, the other children were very scared of him. He is highly intelligent and clearly received intensive training. He keeps to himself. He watches the others but never participates in their games.”

Hassan’s father is dead. His mother lives in Tabqa but has not visited him since he was brought here in 2017 and sentenced to seven years for terrorist activity by a juvenile court. Had Hassan beheaded anyone? “No, I never beheaded anybody. Beheading isn’t a part of Islam. It wasn’t a good life. I wish I could go back to my normal life, the period before Daesh.”

But can he? That is the question that Noura Hasso, the resident educator, grapples with daily as she teaches the children “how to behave well and to respect yourself.” And if so, what then?

Foreign governments are squeamish about taking the children back, not least because of the public backlash. This month, Norway’s coalition government collapsed when a right-wing party withdrew over the decision to let in an “IS bride” and her two children.

When mothers and/or their children are taken back, it's on an ad hoc basis and not because of a policy enshrined in law.

Western governments are in any case often too happy to write them off, claiming they cannot be “de-radicalized.” But experts say this type of framing is very much part of the problem. Leanne Erdberg, director of countering violent extremism at the US Institute for Peace, believes the concept of de-radicalization, which sets the bar impossibly high, should be cast aside in favor of "disengagement” from violence.

“If governments think that these people must de-radicalize — renounce their beliefs — that seems pretty impossible,” Erdberg told Al-Monitor in emailed comments. “Disengagement, instead, is about leaving violent behavior and group identity. And we have seen people leave all sorts of groups — gangs, cults, mafia organizations, abusive families, militias, and even terrorist groups. By talking about disengagement, governments can see practical ways to address — at least some — of the individuals and enact policies that allow opportunities to reject violence.”

For Syrians such as Hassan, disengagement is critical. He has four more years left to serve and when he turns 18 he will be forced to move to a prison for adults, where any “of the good done here will vanish,” Hasso said. “The children are both criminals and victims. They are highly traumatized. They experience difficulty breathing. They get headaches and become confused. They love to smoke.”

The children whose ages range from 11 to 18 receive daily mathematics, biology and history lessons, among others. They are also taught “Ahlak” or ethics and to treat women as equals.

The language of education is Arabic.

Hasso said some of the children have shown signs of adapting. “The boys, especially newcomers, would avoid looking at me because I am a woman and uncovered.” On a recent afternoon, no such prudery was on display as dozens of the boys came into direct visual contact with a female reporter. Some even smiled and allowed themselves to be hugged.

Rola Khatib, a prominent reporter for Dubai-based Al Arabiya television, recalled that the first time she interviewed the children at Houri in April 2019, many were hostile. A Syrian boy said he had been planning “to execute” her. “I was so stunned I didn’t know what to say so I just laughed,” Khatib told Al-Monitor. On her second visit a few months ago many recognized her and came up to her. “They were very friendly, like normal kids,” she said.

Hassan, who was also interviewed by Khatib, acknowledged, “My ideas about women changed here. I would like to marry and settle in Tabqa.”

Mia Bloom, a professor at Georgia State University and the author of the newly published “Small Arms: Children and Terrorism,” told Al-Monitor, “All the children are absolutely salvageable partly because they don’t internalize an ideology until they grow older.” Bloom continued in a telephone interview, “We have to ascertain what the children saw and what they were forced to do and also consider what might have been done to them. Because at least in some instances IS took advantage of the children sexually, even of the Shia boys.”

“It's not just the Yazidi girls who were enslaved or married off at the age of 7 and 8. Some of the boys were trained to be executioners at the age of 4. The really young ones can be salvaged because they can forget.”

The real problem lies with “the tweens,” boys aged 11 and 12, “who don’t have a lot of good memories from before the conflict and all they can remember of their childhood is this,” Bloom said.

Hamza  — who was 10 years old when he traveled with his parents, three brothers and two sisters, from Dagestan to Syria in 2015 — fits the profile. Now he said all he wanted was “to go back to my Babushka [granny] and to school.” His father died in battle in Mosul. His mother remarried. Then her second husband died in a coalition airstrike. Hamza was captured with his mother and siblings by the Kurdish-led Syrian Democratic Forces (SDF) in Baghouz. He was separated from them and put in the back of a truck “and taken to the Americans.”

“They fingerprinted me and told me I would be prosecuted and then returned to my mother. I never was,” Hamza said. The teen, who is accused of having undergone “terrorist training,” has a chunk of shrapnel lodged in his stomach, which along with his age is what probably aroused suspicion. The wound is open and he is in urgent need of surgery. “He needs to be operated in either Damascus or Iraqi Kurdistan,” said Musa, “But there is nothing we can do.”

It's unclear what the criteria, if any exists, for bringing boys to Houri is. The center can accommodate no more than a 100 or so at a time. An untold number of boys, many of them severely wounded and malnourished, are being held elsewhere in northeastern Syria, often in appalling conditions.

The UN and other international organization operating in Syria steer clear of establishments such as Houri for fear of upsetting the central government in Damascus, which does not recognize the autonomous administration. With no external support, Syrian Kurdish authorities are overwhelmed. Turkey’s October incursion, displacing tens of thousands of civilians, made matters worse.

In October, Human Rights Watch quoted a 16-year-old being held at a center for unaccompanied boys who said the SDF and US forces “appeared to decide at random which boys to imprison and which to send to the camps or centers.”

The boy told the New York-based rights group, “One American twice put me in a line to go to jail. But another American cursed him and said, ‘Why are you putting him back? The boy is small.’”

Musa insists that the boys are all here “for a reason” — in other words, they were involved in violence. But it is hard to believe that all of them were. Omar, the bashful 12-year-old Egyptian who made the macrame heart, was brought here in March 2018 after the fall of IS’ last stronghold in Baghouz. His father died in a coalition airstrike in Deir ez-Zor. His mother and 6-year-old sister are living in Roj camp, where IS families are interned. Life in the caliphate was hard, “always airstrikes and no food, only bread,” Omar said.

“I did nothing bad, ever,” he insisted with a pleading look. “I want to be a dentist.”

Sulay Su, a 16-year-old Trinidadian who was helping make the pancakes, was lured along with his mother to Syria by an evil stepfather. The gun runner claimed he was taking them to Saudi Arabia for a holiday. Musa, trading fist bumps with the boy, said, “He is one of our best students.” Su’s story was splashed across the UK daily The Daily Telegraph in August, which depicted a hapless victim of criminally irresponsible parents. His sister Sarah Lee’s appeals to the Trinidadian government to bring him back have fallen on deaf ears.

“A child that has bad enough luck to have been born under [IS] is tainted for life,” said Bloom. 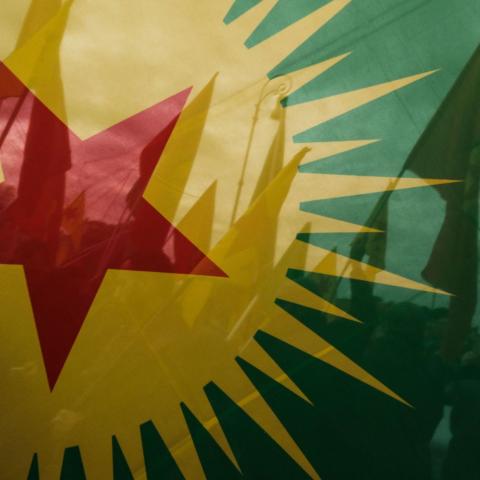 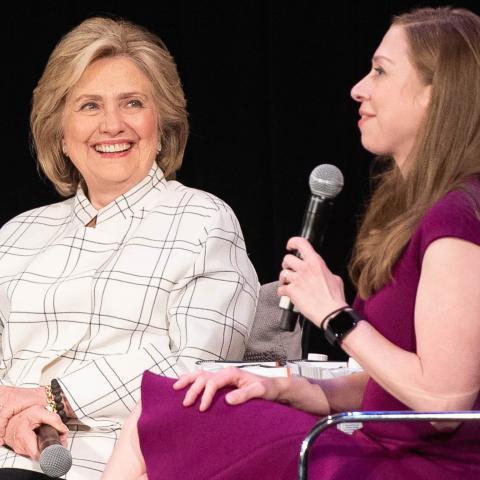 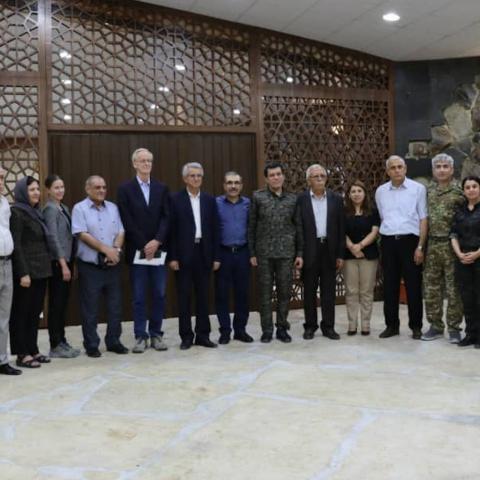