The Putin-Erdogan deal has the Russian military facing a number of critical issues it may not be comfortable with. 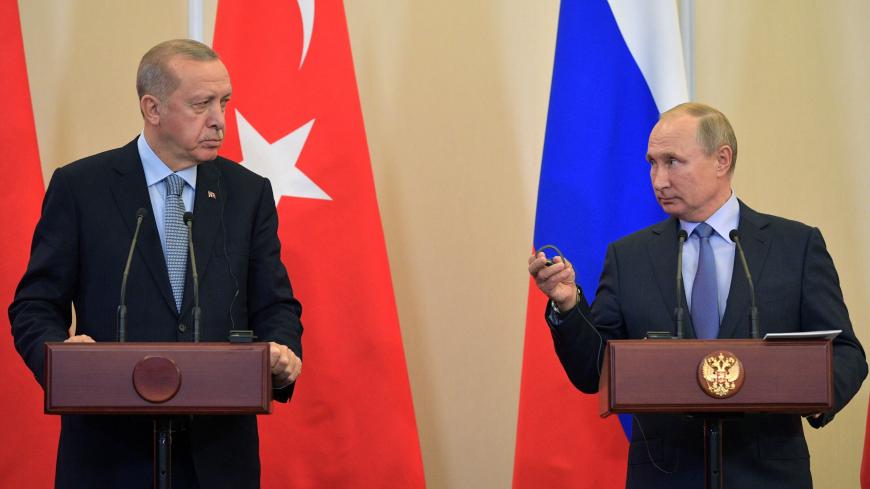 MOSCOW — Following the deal the presidents of Russia and Turkey negotiated in Sochi, the two countries are moving forward with practical steps on the ground. Still, there’s some political messaging to be conveyed to other interested parties and steps on the ground to ensure the initiative goes as planned.

His comments were a reaction to US Syria envoy James Jeffrey, who stated earlier that the Russia-Turkey deal was "full of holes." Jeffrey also observed that the Russian commitments to the Turks were “very vague.”

"President Assad thanked Vladimir Putin, expressed his full support for the results of the work and stated that he is ready to send Syrian border guards to the [Syrian-Turkish] border along with the Russian military police," the Kremlin reported.

Shortly after the meeting in Sochi, reports appeared about a possible Syrian Arab Army attack on Idlib — raising speculation about whether this too was part of the Putin-Erdogan agreement.

The Russians have invested a great deal of energy and initiativeness into the deal and are irritated with critical comments coming from Washington.

“I mean, they are just jealous. Their initiative failed; they failed, and all they want now is for us to quarrel with Turks. They weren’t [very] creative in helping to fix the situation on the ground, but they will get creative in mounting troubles for us and Turks. [It's as] simple as that,” a senior Russian military official told Al-Monitor early Wednesday on the condition of anonymity.

Kremlin spokesperson Peskov said Moscow was serious about its commitments and wants the Kurdish forces to follow along for their own good. If the remaining Kurdish forces fail to pull out and withdraw their weapons to allow the Syrian border guards and Russian military police officers to do their job under the deal, Peskov said, they “will be crushed by the Turkish military machine."

Russia’s Foreign Minister Sergey Lavrov reiterated the message. "The operation is coming to an end; now everything will depend on whether the agreements will be adhered to — namely regarding the disengagement of forces and equipment and the withdrawal of Kurdish military formations," he noted.

“There needs to be patrolling of two separate pieces of territory along the Turkish-Syria border about 320 kilometers (198 miles) in length and 10 kilometers (6 miles) in depth. This will require at least three battalions of military police, three companies of drone aircraft, deployment of at least three outposts. The trucking distance will be quite long too,” Ret. Col. Viktor Murakhovsky, editor of the Arsenal Otechestva (National Arsenal) military journal, told Al-Monitor.

“[There’s a risk] of being pulled into a potentially large-scale ground operation, which we have managed to avoid in the previous four years,” he outlined in his first concern.

“The operation is formally that of peacekeeping and counterterrorism, but in order to implement it, Russia would need to deploy larger forces and more equipment far away from our military bases in Hmeimim and Tartus. This will make the air force support for the troops more difficult,” Murakhovsky explained.

“Objectively speaking, the Russian engagement [in the] ground operation plays [an] American card. The air space east of the Euphrates is [still] the zone of control of the Americans, and we’ll have to deal with this issue,” Murakhovsky said, describing the second concern.

Regarding the third concern, he argued, “Russian troops become a target for radical and terrorist elements of various Syrian National Army factions as well as the Kurds. Russians may fall prey to 'side attacks' on Turkish forces."

Russia's Defense Ministry is indeed grappling with the issue of whether additional troops would be needed to deliver upon Russian commitments.

"As for additional troops, we naturally believe … that additional equipment will be needed for patrolling since the border is rather extensive, and the patrolling should be serious and substantial so that we could avert any serious incidents — especially since the patrolling will be carried out jointly," Russian Defense Minister Sergei Shoigu explained.

There are other open-ended questions the Russian military will have to deal with, such as what to do with the Kurdish forces that for whatever reason don’t withdraw from the areas agreed upon between Russia and Turkey. The deal also didn’t specify what forces are to control the area beyond those under joint Russian-Turkish patrol — specifically, on the flanks and in the south from Operation Peace Spring.

Another issue the Russian Defense Ministry is preoccupied with is whether a special agency should be set up to regulate the return of refugees to the areas under the deal.

"Many legal issues emerge that are not regulated by international law in any way. Of course, a special agency will need to be set up, or the United Nations should closely work on this issue," Shoigu told reporters in Sochi. He said the Russian military assessment is that there are seven prisons in the so-called autonomous administration of north and east Syria that house supporters of the Islamic State and at least eight camps for internally displaced persons, including militants' wives and children.

"There is now an issue of returning them to their countries. This issue is much more complicated than it seems. Who will they return as? As someone who visited a foreign country as a tourist? Or as someone who participated in combat?" Shoigu asked.

In the meantime, Moscow seeks to follow up on the meeting and reinforce its engagement with Turkey through other areas important to Ankara. Following the Sochi meeting, the Russian Defense sales agency announced that Moscow and Ankara were in talks about extra deliveries of the S-400 missile defense systems.