Will Russia, Turkey go to war over Syria's Idlib?

Matters have gone from bad to worse in Idlib and the stakes for Moscow and Ankara are rising. 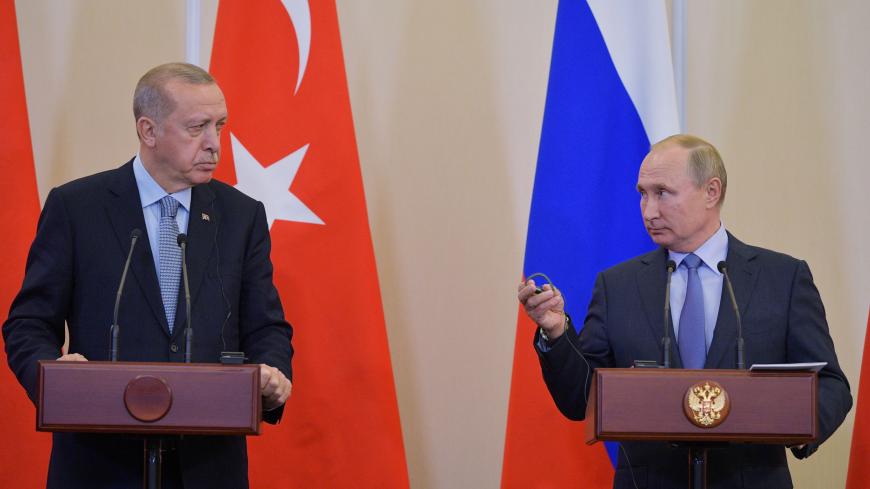 MOSCOW — Russian President Vladimir Putin spoke by phone today with his Turkish counterpart Recep Tayyip Erdogan concerning the recent escalation in Idlib. The day before, airstrikes from the Syrian army — with backing from Moscow — reportedly killed over 30 Turkish servicemen and injured more than 70.

“[The presidents] exchanged views on the situiaon in Syria in detail. A serious concern over the escalation of tensions in Idlib was expressed that entailed multiple casualties, including among the Turkish military. The importance of raising the efficiency of coordination channels between the defense ministries of Russia and Turkey was stressed,” stated a readout of the conversation from the Kremlin.

It added, “Both parties emphasized the need to adopt additional measures in order to normalize the situation in the northwest of Syria. [The parties] agreed to intensify relevant interagency consultations and explore the possibility of holding a top-level meeting in the immediate future."

"The fight against international terrorist groups was highlighted as a priority," the statement read.

Earlier, the Russian Defense Ministry said, “Turkish servicemen within the combat units of terrorist groups came under fire from the Syrian military on Feb. 27 near the town of Behun.”

The ministry stated that it was in constant contact with Turkish counterparts, “regularly requesting and receiving information” on the whereabouts of Turkish troops. According to the data submitted by Ankara, Moscow claims, there were no Turkish soldiers near Behun when the Syrian army “attacked the terrorists.”

Turkey reacted to the attacks by launching military strikes on the Syrian positions, allegedly “neutralizing 309 regime troops.” It also opened its borders for Syrian refugees to enter Europe, likely to pressure the Europeans to take a harsher stance on Russia and Syria. Erdogan's decision triggered angry reactions from Greece, which deployed police reinforcements to the country’s border checkpoints with Turkey to prevent the influx of new migrants. Ankara also called for an emergency NATO meeting over the situation in Syria.

Moscow was unsurprised by these reactions, which show that Ankara is not interested in a direct military confrontation with Russia — it even attributed the attacks to the Syrian army, not Russian forces — but seeks to tie Moscow’s hands in Syria via political means.

“This is not a war against Turkey, this is to place flags and stress the red lines that some decided to test. The rules for the big game have long been agreed on with Turkey. They implied, first, the prevention of clashes between the Russian and Turkish militaries. Second, freedom of movement for Russian air forces against terrorist groups in Idlib. Third, a no-fly zone for Turkish air forces in Syrian skies. Fourth, coordination of movement and deployment of Turkish units in the Syrian areas with Russian military command. Fifth, joint patrols on the agreed routes. Sixth, a ban on the transfer of MANPADs to any non-state actors,” he wrote.

Murakhovsky noted that Turkey or loyal opposition groups might have used a Turkish-produced version of the Stinger MANPAD to attempt to shoot down a Russia jet over Idlib.

Even if this situation was indeed the last straw that made Moscow authorize the strikes, the escalation that ended in mass casulties among Turkish soldiers has been brewing for weeks. Numerous meetings betweeen the Russian and Turkish militaries ended without results, with the parties resolving to stand their ground in Idlib. Russia saw its “moral high ground” in Turkey’s inability or unwillingness to commit to the provisions of 2018 Sochi deal between Putin and Erdogan on the separation of rebels from the terrorists and unblocking the strategic M4 and M5 highways, which span the country east to west and north to south, respectively.

Over the days before the strikes, Russian military circles and associated pundits have discussed various quasi-military scenarios vis-à-vis Turkey, a menacing signal of where the situation may be heading.

“Should there be a massive military incursion of the Turkish army into Syria, things may spin out of control. The risk of a large-scale military regional conflict is high,” Ret. Col. Mikhail Khodarenok wrote on Feb. 21.

Khodarenok believes Turkey has enough military might to overrun the Syrian army within days. He argues that the ultimate outcome in such a war would have been decided by the position of other powers — Russia, the United States and NATO.

“Should Moscow choose not to intervene it will be a political-military fiasco. The Kremlin as a geopolitical player in the Middle East will be done," he argued, adding, "More than five years of Moscow’s efforts in Syria would be wasted," and "This will be the price of the Russian non-interference over Idlib.”

Yet he equally cautioned against open Russian military engagement with Turkey, warning, “Turkey will have an overwhelming superiority in personnel and military hardware. … Russia is too far from the theater of operations and won’t have the time or logistical capabilities" to bring in the personnel or equipment needed and "In order to win this war, Russia would need to transfer a phenomenal amount of aircrafts, fuel and ammunition.”

The only way to deter Erdogan from further escalation, Khodarenok argued, would be the threat of tactical nuclear weapons. But the international repercussions for Russia may be too severe to seriously consider this option.

The current mood within the Russian political class is perhaps as bellicose as it is in the Turkish one.

“If the Turks bet on military force, that would be a really bad idea since winning such a war would be difficult,” said Vladimir Dzhabarov, the deputy chair of the foreign affairs committee of the upper chamber of the Russian Parliament.

Yet, the key decisions that are being discussed this minute are unlikely being made only by measuring the military capabilities of one power against the other.

“Erdogan went a bit too far with his bluffing on the incursion this time. The strikes are a bad decision, a hard one. But we don’t want a war, we mean business and we want our partners in Ankara take our concerns and their commitments seriously. This game of chicken has gone too far,” a source in the Russian government who asked not to be identified told Al-Monitor.

Putin and Erdogan are increasingly unhappy with one another but both still need each other in Syria and beyond. To extend the “marriage of convenience” metaphor that is frequently applied to describe the Russia-Turkey partnership, the two have to stay together “for the kids” — joint trade, growing interdependency in energy supplies, the Akkuyu nuclear power plant and the S-400 missile deal as well as other possible contracts and political investments the two leaders have made into developing the relationship.

For Russia, the value of Turkey in these and other domains has not depreciated. It's even grown since the last stress test Moscow and Ankara experienced when Turkey downed the Russian jet in November 2015. Against this particular measurement, the partnership with Syria seems a lot less significant. Yet the price of not standing up for its ally in Damascus is measured in different currency in Moscow — one that buys global status. To some degree, both leaders have been backed into a corner over a combination of high expectations of each other, promises to one another and to their allies and proxies, provocative moves on the ground and great power ambitions. But it’s these types of crises that tend to define a country’s strategic orientation.