What Putin-Erdogan deal means for Idlib

Russian President Vladimir Putin and Turkish President Recep Tayyip Erdogan hammered out a deal on "demilitarizing" Idlib that both parties seem to be content with — yet serious political and military challenges persist. 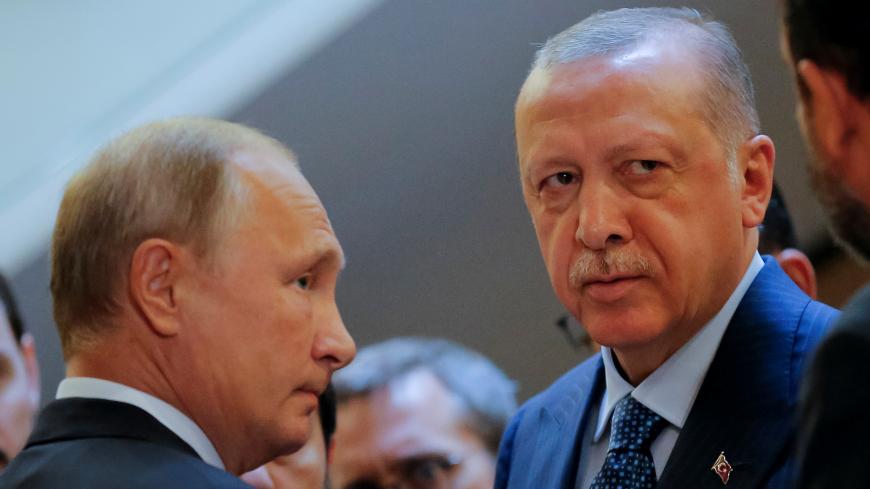 MOSCOW — Russian President Vladimir Putin hosted his Turkish counterpart, Recep Tayyip Erdogan, in Sochi Sept. 17 for what was initially seen as a final showdown over Idlib. The situation in the northern Syian province has been in the spotlight of all Middle East watchers for well over a month, with escalations between the two sides threatening a large-scale humanitarian crisis. Al-Monitor reported on earlier efforts between Russian and Turkish diplomats as well as military and intelligence officials to work out a “peaceful scenario” for Idlib, but it took a meeting between the two presidents to reach the agreement on a buffer zone. In fact, the Sochi meeting was the third personal encounter between the two presidents over the last three weeks.

“There is a lot to discuss and some issues are complicated. I am glad to see you, to be able to exchange opinions on this whole set of issues, and to search for solutions to matters still unresolved,” Putin noted in his opening remarks.

Referencing previous meetings between the two leaders, Erdogan replied that exchange of opinions "strengthens our cooperation." He added, "Due to our solidarity on regional issues, the regional peoples count on this cooperation. I believe not only the region, but the whole world is riveted by our meeting today. The statement we will make here after the meeting in Sochi will give new hope to the region, I believe."

The tensions over Idlib have seemingly calmed down over the weekend, with forces supporting President Bashar al-Assad reportedly having pulled back from front lines in northwest Syria as the parties actively work their diplomatic channels.

Over the weekend, high representatives of Turkey, Russia, France and Germany met in Istanbul to discuss the situation. The initiative proposed by Ankara sought to get the Europeans on board with Turkey’s agenda of preventing the massive flow of refugees should a large-scale Idlib offensive begin. The parties agreed that any attack would have “severe results” and that “a political solution must be reached.” Turkey, however, declined the idea on humanitarian corridors put forward earlier by Foreign Minister Sergey Lavrov as premature.

During the meeting in Berlin with his German counterpart, Heiko Maas, Lavrov argued that Moscow would keep hitting “terrorist weapons-making facilities” in Idlib “if need be,” but would also encourage local reconciliation deals and open humanitarian corridors to allow civilians to flee.

Ahead of the encounter with the Turkish president, Putin told Russia’s Security Council he was “concerned by militant activity” in Idlib — an intentional leak by the Kremlin’s press secretary to signal Moscow’s own security concern in the situation.

A senior Russian diplomat, speaking on condition of anonymity because he was not authorized to comment on the situation to the press, told Al-Monitor before the Sochi meeting of the two presidents that Moscow is “flexible to solutions but firm in its intent to settle the issue once and for all.”

He said, “With Idlib, we are in intense 24/7 contact with the Turks on different levels and if it were not for the Western meddling, constant threats and pressure, we could have calmly worked it all through. Neither Europeans nor Americans are proposing anything substantive or constructive at this point, [only issuing] constant ultimatums.”

What the two leaders eventually emerged with from the five-hour meeting was the deal on the buffer zone.

“We have agreed to create a demilitarized zone between the government troops and militants before Oct. 15. The zone will be 15-20 kilometers wide, with full withdrawal of hard-line militants from there, including Jabhat al-Nusra.” Putin announced.

Details of the deal are yet to be finalized, but the parties have already agreed on withdrawal of all heavy weaponry, including tanks and artillery, from the zone before Oct. 10 — the proposal made by the Turkish side. The zone itself will be patrolled jointly by Russian and Turkish military units.

According to Putin, Russia has enlisted “general support” for the deal from the Syrian government that should in theory make the agreement between Moscow and Ankara sustainable in the long run, though there are always risks on how it will play out in practice.

Timur Akhmetov, a Turkey expert at the Russian International Affairs Council currently based in Ankara, told Al-Monitor, “On the whole, the deal [suits] Russia’s interests better.”

He added, “Turkey maintains its commitment to the Astana process and continues to assist on relevant political issues. It also assumes responsibility to prevent attacks by terrorist groups on Russian military objects. Ankara indeed [saves] both Idlib and the moderate opposition from a Syrian army offensive but also bears associated risks of fighting radical groups."

Both leaders sounded content with the solution their teams have been meticulously developing. The two sides seem to admit that while the deal may be temporary, in the short term it addresses the most pressing issues that have long clouded prospects for the future of the Russia-Turkey relationship.

Erdogan stressed the agreement is meant to prevent a new humanitarian crisis in Syria, helping Turkey to avoid an even more "difficult situation."

“Where there’s a will there’s a way,” another Russian diplomat privy to the Russian-Turkey consultations told Al-Monitor, commenting briefly on the outcome of the Sochi meeting.

The deal, however, if it indeed can be branded as such, is a significant but just initial serious step in settling the complex matter Idlib has grown into over the last few years. The juice is definitely worth the squeeze here but multiple challenges — military and diplomatic alike — remain. Most important is the question as to how long Moscow can be successful in continuing to restrain President Assad’s attempt to extend his government's control over the territory and whether Ankara delivers on its own commitments that are many, fine and security-sensitive. Finally, there are questions over how politically and militarily “surgical” both will get trying to separate the “moderate wheat” from the “radical chaff” without endangering Syria’s security in the long run, by trying to assimilate the latter into the former, but also without hurting the civilians in the immediate term.