Russia gives Turkey one last month for solution in Syria

Ankara has won some breathing room in Syria, having one month to persuade radical forces to give up their guns, leave Idlib, join a Turkish-backed rebel alliance or face a crushing assault by the Syrian regime supported by Russian forces. 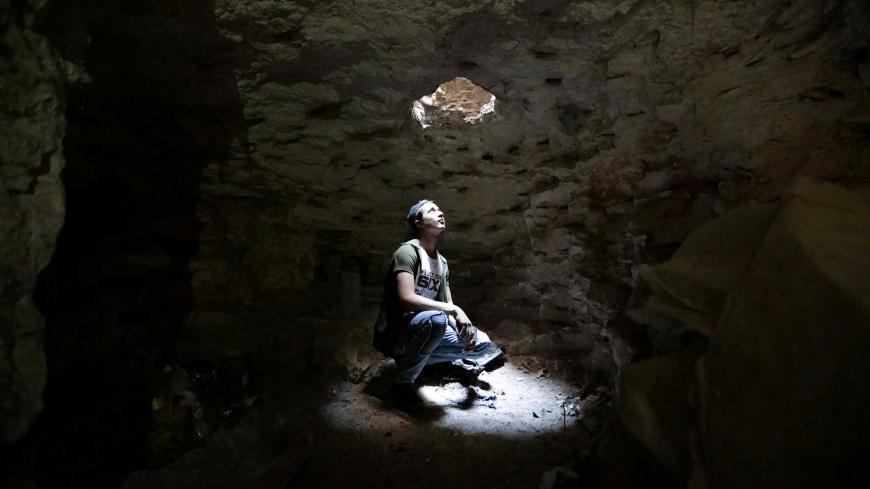 A man looks up through an opening in the ceiling of a makeshift shelter in a cave, Idlib, Syria, Sept. 3, 2018. - REUTERS/Khalil Ashawi

Seeking to prevent a bloodbath in Syria's Idlib province, Turkish President Recep Tayyip Erdogan and Russian President Vladimir Putin met for five hours Sept. 17 in Sochi, after which Putin disclosed that a demilitarized buffer zone some 15-20 kilometers (9-12 miles) wide will be activated there, effective Oct. 15.

The decision puts on hold, at least for now, what had appeared to be an imminent attack on Idlib by Russian and Syrian regime forces seeking to conquer the remnants of radical opposition in the seven-year civil war. Such an attack, however, could endanger millions of civilians, along with what Turkey considers moderate rebel groups that have cooperated with Ankara. The Idlib buffer zone aims to separate Syrian regime forces from armed opposition, and moderates from radicals. All opposition groups are to withdraw their heavy arms.

After his meeting with Putin, Erdogan said, “The opposition will remain where they are, but the [radical] groups that we will determine jointly with Russia won't be allowed to operate. The boundaries of the demilitarized zone will be supervised jointly."

The question now is how this comprehensive plan will be implemented in one month. Less than two weeks ago, at a meeting in Tehran, Putin had objected to Erdogan's call for a cease-fire, saying, “Hayat Tahrir al-Sham [HTS] and other radicals aren't at the [negotiating] table. We cannot give guarantees on their behalf.”

In return for the one month it gained at Sochi, Ankara is giving those guarantees on behalf of radical groups in Idlib. Perhaps Moscow has realized it couldn't cope with a humanitarian tragedy at Idlib and wants to guarantee the security of its military presence in northern Syria, notably Khmeimim air base, with Ankara’s assurances.

Now the most argued critical issue is, how can Ankara assure Moscow that Idlib radicals will agree to a demilitarized zone and removal of their heavy weapons? One likely answer is that Ankara will rely on its military power and its substantial influence on the armed opposition groups to convince them.

Ankara primarily reinforced each of its 12 military outposts with 80 to 1,000 mechanized infantry and commando troops (totaling 1,200-1,300) and equipped the outposts with multiple rocket launchers and other protection measures, and seriously buttressed its military presence around Idlib. Ankara also sealed off the border west and north of Idlib with military reinforcements.

But Turkey's increased military preparations in Idlib province are only for defensive action, as its 12 outposts insulate Idlib from pro-Iran militias south of Aleppo and those controlled by Syrian forces loyal to President Bashar al-Assad in the southeast.

There are also restraints on Ankara's military capabilities at Idlib, most notably the absence of air superiority. The Sochi summit didn't refer to air superiority, which shows the limits of Moscow’s confidence in Ankara. Moscow supports Ankara’s efforts for de-militarization, but doesn’t favor the idea of a no-fly zone and wants to hold on to Russia's dominance in the air over Idlib. Russia’s monopoly also means that, should clashes escalate around Idlib and Turkish troops are caught in the middle, Ankara will have to rely on Moscow for air evacuation and close-air support for those troops.

It will be interesting to see how Ankara tries to persuade Idlib radical groups — above all, HTS — to get on board with the Putin-Erdogan agreement. It appears Ankara has offered these options:

If there are groups that reject all options, Ankara will then be expected to provide Russia with intelligence and logistics to conduct targeted operations against them.

It's now understood that the Idlib operation, instead of being a high-paced, short-term operation, will drag on for eight to 10 months at a low tempo with occasional targeted attacks while negotiations continue. Ankara now faces two important risks. The first risk is the security of Turkish troops serving around Idlib. The second, and probably more important, risk is the possibility that armed radical groups that resent Ankara’s mediation efforts will punish Turkey by launching terror attacks in Turkey. No doubt Ankara will be on high alert for such an eventuality.