Rouhani calls US sanctions on Iran 'crime against humanity'

Iran's president has slammed the US economic sanctions on food and medical supplies for Iran but promised that Tehran will defeat Washington in the "economic war." 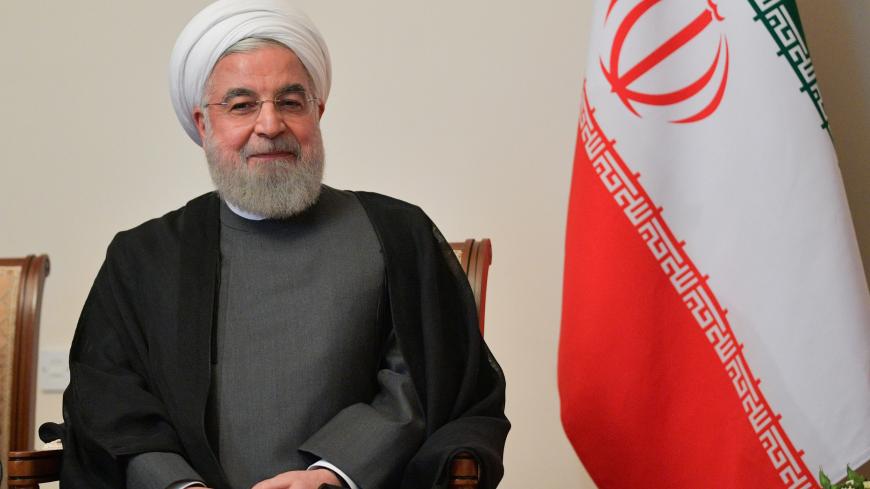 Iranian President Hassan Rouhani attends a meeting with Russian President Vladimir Putin on the sidelines of a session of the Supreme Eurasian Economic Council In Yerevan, Armenia, Oct. 1, 2019. - Sputnik/Alexei Druzhinin/Kremlin via REUTERS

Iranian President Hassan Rouhani has once again slammed the United States for abandoning the 2015 Iran nuclear deal, a departure that reinstated onerous economic sanctions on his country and has dramatically reduced the Iranian public's purchasing power. Rouhani described the decision as a "disgrace" for the United States. "Even more disgraceful was the act of imposing sanctions on food and medicines destined for Iranians," he said in his Oct. 15 address to a summit of the World Health Organization's Regional Committee for the Eastern Mediterranean in Tehran.

Despite denouncing those sanctions as "a crime against humanity," Rouhani downplayed their impact, boasting about what he said was Iran's 95% self-sufficiency in supplying its domestic pharmaceutical demand.

US officials have repeatedly claimed that the Iran sanctions do not target the medical sector, an assertion that Foreign Minister Mohammad Javad Zarif has persistently dismissed. "Don't take it just from me," he tweeted earlier in August, quoting a Foreign Policy report that had found US sanctions lethal to Iranian cancer patients.

In his speech, Rouhani predicted that the United States will ultimately face defeat in the "economic war," while Iran will emerge triumphant. He suggested that the "allies" of the Islamic Republic have ignored US pressure by offering Iran concrete help, but did not specifically name any country. The Iranian president noted that the United States had no logical justification in scrapping the nuclear deal and only "bowed to pressure from extremists at home, the Zionist regime and Saudi Arabia."

The remarks came only one day after a rare presser in Tehran, where Rouhani addressed the heightened tensions in the Persian Gulf and the attack on an Iranian oil tanker off the coast of Saudi Arabia Oct. 11. The president said Iran possessed footage showing the direction from which two rockets hit the vessel and that Iran was positive "it was not the job of an individual or terror group, rather that of a state." Rouhani warned that whoever was behind the attack would have to await the "consequences."

The incident came less than a month after sophisticated missile and drone strikes claimed by Yemen's Iran-backed Houthi rebels on the Saudi Aramco oil facilities. The kingdom, the United States, France, Germany and the United Kingdom all blamed the attack on Iran, an accusation Tehran has vehemently denied.

Rouhani stopped short of blaming Saudi Arabia for the "mischievous" attack in the Red Sea. Instead, he spoke of de-escalation with the regional archenemy. The process, he said, could start with a cease-fire in Yemen, where Riyadh has been fighting a protracted war to contain the Houthis since 2015.

In recent weeks, green lights for dialogue have come from both Riyadh and Tehran with mediation pursued by some regional states. Most notably, Pakistan's Prime Minister Imran Khan was in Tehran Oct. 12. Rouhani said the Pakistani leader had heard the Iranian leadership's stance on regional tensions. Khan has now headed to Riyadh, further evidence that he is set to bring the two sides closer to the negotiating table.

On relations with the United Arab Emirates — another regional foe of Iran — Rouhani confirmed media reports that official visits had taken place on both sides. "Iran-UAE ties have improved in recent months," the Iranian president declared, adding, "We have never sought hostile relations with our neighbors."