Traveling between Riyadh and Tehran, Pakistan’s prime minister is trying to diplomatically defuse the highly charged situation in the Middle East. 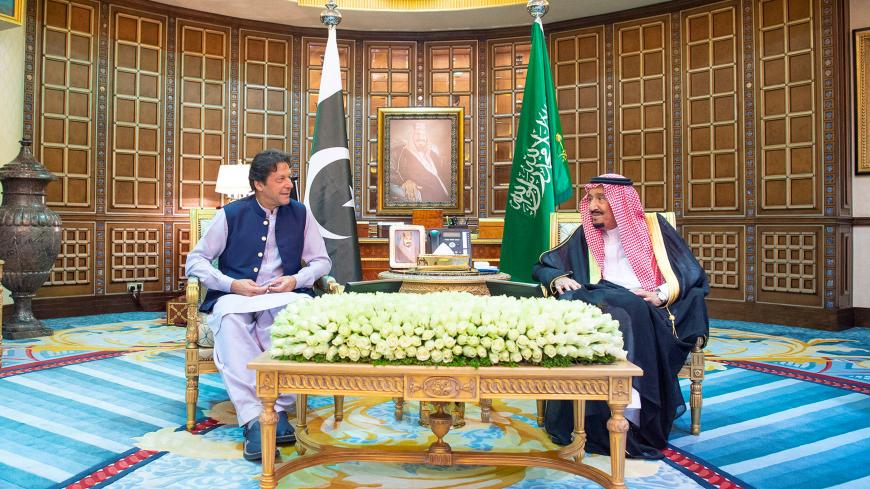 Acting as a facilitator, Pakistani Prime Minister Imran Khan recently paid a visit to Tehran and then Riyadh to try to defuse soaring tensions between Iran and Saudi Arabia.

Since the Sept. 14 cruise missile and drone attacks on Saudi Aramco oil installations, relations between the two close allies of Pakistan have been headed for a complete breakdown. Avoiding a war in the Gulf is Pakistan’s primary goal, especially since an Oct. 11 attack on the Iranian vessel Sabiti could become a trigger.

Khan’s arrival in Tehran just two days after the latter incident indicates the urgency of the matter. After meeting Iranian President Hassan Rouhani and Supreme Leader Ali Khamenei, Khan said at a news conference alongside Rouhani, "We recognize that it is a complex issue, but we feel it can be resolved through dialogue. What should never happen is a war between Saudi Arabia and Iran because this will not just affect this whole region — two brotherly countries will be affected — this will cause poverty in the world. Oil prices will go up.”

The premier also offered to host talks between Saudi Arabia and Iran in Islamabad, as a neutral venue. Apparently, it was Pakistan's own initiative to act as a middleman, but the visit has yielded some encouraging results. Both Khan and Rouhani agreed that the war in Yemen has to end.

At the recent meeting, Iran again raised a four-point solution initially proposed by Foreign Minister Javad Zarif in 2015, soon after the Yemen fighting began. This plan requires a "cease-fire, humanitarian assistance, intra-Yemeni dialogue, and an inclusive government for 2½ years that could be extended beyond that period.”

The Iranian government also expressed willingness to participate in any mediation or direct talks with Saudi Arabia and welcomed Khan’s efforts. Resolving to respond to any goodwill gesture positively, Rouhani affirmed that US sanctions on Iran and the possibility of restoring the nuclear deal had also been discussed.

Two days later, Khan arrived in Riyadh, and comprehensive discussions were held with the Saudi hierarchy, which said it appreciated the Pakistani prime minister’s efforts for peace and de-escalation of tensions. According to the Saudi government's statement, they discussed the “latest developments in the region and a number of issues of common interest.” A press release from Khan’s office provided more details, saying the Saudi side agreed to move the process forward, continue consultations and remain engaged.

This made it appear as if Khan’s peace initiative ended with some indications of a breakthrough.

First, the initial objective has been achieved, as both Saudi Arabia and Iran are willing to negotiate. Riyadh’s willingness to de-escalate tensions with Tehran is a positive sign, even though finding common ground between them could still prove to be a hurdle.

Second, at least for the time being, the chances of an imminent war in the Gulf are greatly reduced. With this effort, Pakistan has forestalled the dangerous escalation threatening to engulf the entire region.

Third, according to Pakistani Foreign Minister Shah Mahmood Qureshi, who spoke to the press after he returned from both trips Oct. 16, a mechanism for continued engagement between both parties is also in the pipeline, while a cease-fire in Yemen is being discussed. Even though the sides have disclosed no set dates for further negotiations, this is a hopeful beginning and an immediate crisis may have been contained.

In the past, Pakistan has tried to mediate at least four times between the two rivals without success. But Pakistan’s refusal to join forces against Yemen in 2015 is now providing Islamabad the required neutrality to mediate more effectively. Also, the mediation bid has worked in Islamabad’s favor as, by becoming a would-be peacemaker, Pakistan is able to deflect pressure from each rival to side with it.

However, even though it’s a bold initiative, it may or may not produce lasting results until Pakistan mediates between Tehran and Washington as well.

Unfortunately, relations between the United States and Iran have reached a deadlock and the status quo is unsustainable. Until the core issue of a new nuclear deal between Tehran and Washington is tackled, tensions in the region are likely to continue, as Iran won’t be able to resume its oil trade and get out of its economic crisis.

Not only that, but since the attacks on the Aramco facilities, Washington’s presence in Saudi Arabia has been upgraded, as Riyadh didn’t have a suitable deterrent for drone strikes. Recently, King Salman bin Abdul-Aziz Al Saud approved the deployment of more US troops in the kingdom to prevent any more attacks on its oil assets.

With this situation, Saudi Arabia has become more reliant on the United States for providing security, and the latter can’t be totally excluded from any understanding with Iran. Therefore, relations between the United States and Iran would have to improve, as conditions in the Gulf can’t be normalized otherwise.

This year, Germany and Japan have both made efforts to end the stalemate but have been unsuccessful. Last month, Khan was asked to mediate between Washington and Tehran by US President Donald Trump, who suggested Khan “try and be a go-between with Iran and the United States.” Khan tried to do so at the UN General Assembly meeting last month, but had no success.

Nevertheless, Khan discussed the possibility of Iran-US talks once again during his visit to Iran. “I did speak to President Rouhani when I was in Iran about the US offer. And that’s an evolving situation, so let’s see if it gets anywhere,” he told CNN just before leaving Pakistan for Riyadh. Proceeding to describe the US-Iran situation as “more complicated,” Khan preferred not to discuss the matter any further “until there is some response from both sides.”

Realistically, any Saudi-Iran talks are bound to hit a roadblock again unless the United States is brought into the picture. Having initiated an improved level of communication between Riyadh and Tehran, Khan may have gained enough trust with Iranian leaders to persuade them to negotiate with Washington.