Pakistan is managing to maintain a delicate balance in its foreign relations despite the fierce rivalry between two of its allies, Iran and Saudi Arabia. 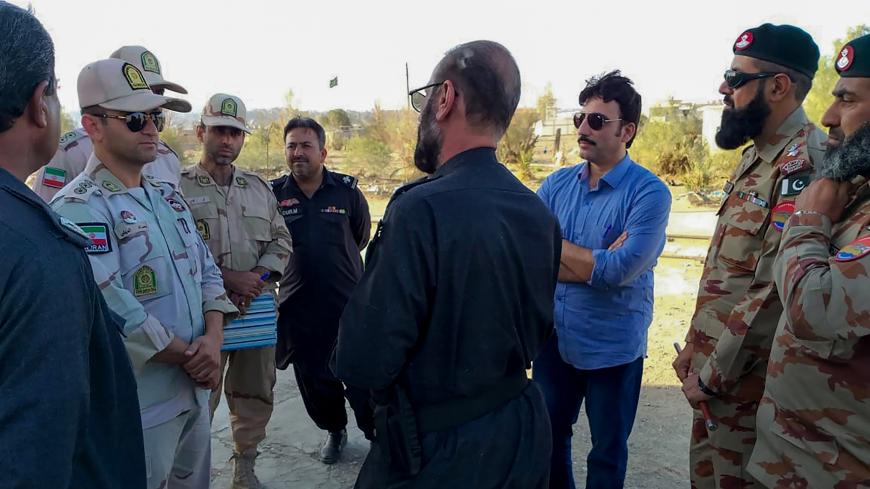 In February, a suicide attack killed 27 Iranian soldiers near the border, and just before Khan arrived in Tehran, a lethal attack took place at Ormara in Pakistan’s Baluchistan province, targeting Pakistani soldiers and members of the naval coast guard.

Suspecting a foreign hand behind the terror attacks, Khan shared his concerns during a joint press conference April 22 with President Hassan Rouhani, saying, "The most important reason why I'm here, Mr. President, is because I felt that the issue of terrorism was going to … increase differences between our countries.” Both leaders agreed to take stringent security measures to deal with the wave of terrorism in recent months.

The border extends almost 1,000 kilometers (about 600 miles), separating the southeastern Iranian province of Sistan-Baluchestan and the southwest Pakistani province of Baluchistan.

Having been a sensitive region since the 1970s, the area has become more important, but even more dangerous, in recent times. The creation of the joint Pakistan-Iran force has great significance for several reasons.

To start, Pakistan is also an important member of the Saudi-led Islamic Military Counter Terrorism Coalition (IMCTC). Saudi Crown Prince Mohammed bin Salman proposed the coalition in 2015 to “work together to support the military, financial, intelligence and political efforts of every member state.”

Though the IMCTC has 41 members under its umbrella now, states where Shiites have significant power — like Iran, Syria and Iraq — remain excluded, fueling the perception that it is a “Sunni lobby” force. Nevertheless, the IMCTC commander, Pakistan’s ex-army chief Gen. Raheel Sharif, tried to set up direct communication channels between Iran and Saudi Arabia, and he made it clear that the IMCTC is “not against any country or any sect.”

Still, forming the Joint Rapid Action Force is not only helping Pakistan upgrade its strategic ties with Iran, it also symbolically brings Pakistan’s military ties with Tehran on par with Riyadh.

Second, stabilizing Pakistan’s Baluchistan province has great geopolitical importance, as it is crucial for the success of the China-Pakistan Economic Corridor and Pakistan’s Gwadar port. This corridor is the first to near completion under Beijing’s massive Belt and Road Initiative, so avoiding a proxy war in this area is extremely important for China as well.

Third, Iran believes that the armed rebels in this region are Saudi-backed, Sunni militant groups, though Riyadh vehemently denies this charge. Complications could arise if both these close allies of Pakistan accuse each other of being the problem. Interestingly, it was officially declared at the press conference during Khan’s visit that Wahhabi (strict orthodox Sunni Islam) groups are operating in the region. Thus, though the purpose of both the IMCTC and the Joint Rapid Action Force is counterterrorism, it is hoped no sectarian issues arise.

In the meantime, Khan has also acknowledged that armed rebels have used Pakistan to carry out attacks on Iran. Though he faced scathing criticism for the admission from the opposition at home, he chose to take this unusual step. It’s possible that Khan’s admission was a quid pro quo gesture to achieve a better level of understanding and consolidate Pakistan-Iran ties.

Khan pledges to ban Sunni militant groups like Jaish al-Adl that are carrying out terror attacks in Iran’s border areas, and expects Tehran’s help to flush them out. Militants will have to be eliminated on both sides and their safe havens destroyed. Notably, the intelligence chiefs from both countries discussed ideas on the subject in a special meeting.

As always, Pakistan intends to manage these regional issues in a balanced, neutral manner. Staying out of the Saudi-Iran conflict, Islamabad can’t swing to either side as it balances both the Sunni and Shiite sects at home, even though it has a massive Sunni majority. Though it stays neutral, Pakistan has remained an important stakeholder in both the Middle East and South Asia.

Without Islamabad’s participation, the Saudi-led IMCTC would lack clout, and even though Pakistan often contributes troops and provides training to the Saudi armed forces, it has never sent soldiers there to fight outside the Saudi kingdom. Refusing to take sides is Pakistan’s tried-and-tested foreign policy and it would prefer to maintain that policy as it works to contain any proxy war in Baluchistan.

Balancing Riyadh and Tehran is tricky, but not impossible. Even though the rivals are facing each other on Pakistan’s border, both seem to have their sites set on southern Asia right now. Saudi Arabia is looking southeast in the long term as it tries to secure a new market for its energy industry, while US sanctions on Iran have also forced Tehran to look in that direction.

At this point, it’s not really in the Saudi interest to destabilize a province where it has invested heavily and is launching a next-generation petrochemical industry. Ultimately, ending the Saudi-Iran tug of war is best for the region, and mediation efforts must continue. At times, the situation does seem to be on the mend, for example when the Saudi and UAE governments donated to Iran after recent devastating floods.

Interestingly, during an April 24 talk at the Asia Society in New York, Iranian Foreign Minister Javad Zarif recently suggested starting a regional dialogue exclusively within the Persian Gulf, saying, “We are ready for a nonaggression pact including Saudi Arabia, including the United Arab Emirates.” As long as they are also ready, “we have no problem.”