The world can hope for, but not expect, great things to come from Pakistani Prime Minister Imran Khan's recent diplomatic trips to Iran and Saudi Arabia. 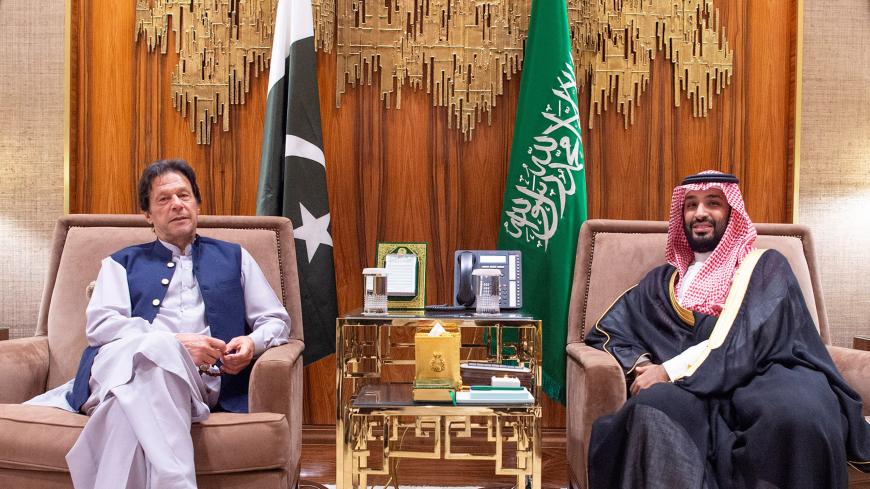 In pursuit of peace building, Pakistani Prime Minister Imran Khan had a hectic week visiting Tehran and Riyadh earlier this month. He arrived Oct. 13 in Tehran, where he met Iranian President Hassan Rouhani and Supreme Leader Ayatollah Ali Khamenei. As he left Tehran, Khan said, “I will go to Saudi Arabia with a positive mind.”

Two days later, he arrived in Riyadh and met with Saudi King Salman bin Abdul-Aziz and Crown Prince Mohammed bin Salman. According to Pakistan’s Foreign Office, Khan advised the monarch to resolve differences with Iran “through diplomacy." However, there was no news about the Saudi family's response to this advice.

The initiative wasn't accompanied by positive signs in the first place. On Oct. 11, just before Khan's arrival in Tehran, there was an attack on an Iranian oil tanker near the Red Sea port of Jeddah, Saudi Arabia. Iran indirectly blamed the Saudis, pending an investigation, and issued a firm warning. (Since then, Iran has placed blame on Iran, the United States and Israel.)

There was speculation in the media about whether the visits were Khan’s own initiative, as he said, or the result of a request by President Donald Trump and the crown prince.

Moreover, when Russian President Vladimir Putin paid an official visit to Riyadh a day before Khan, he was asked about speculation that he has an agenda to mediate between Iran and Saudi Arabia. On his trip, Putin did not show much enthusiasm, and asserted that Iran and the kingdom don't need a mediator or outside advice.

Some analysts have stressed that Khan's mission may benefit Pakistan by promoting its neutral stance in a standoff between two Gulf rivals, and could relieve Khan of pressure to pick a side. But don't expect his trips to do much for the peace process itself, they say.

However, Pakistan’s Foreign Office claimed Oct. 17 that negotiations with the Saudis were “comprehensive and constructive” and the two sides agreed on “remaining engaged” while “the mechanism for taking the process forward was being negotiated.”

First of all, historically, it's not just that Iran and Saudi Arabia have a long history of hostility. This marks at least the fourth time Islamabad has tried to soothe animosity between the rich archrivals in the Persian Gulf, and none of them could be considered a success or breakthrough. History does not help Khan.

Second, Iran has every reason to believe Khan is not a natural go-between for the two rivals. The embattled Pakistani premier, smartly, has tried to escape the consequences of the term “mediating” and has widely reiterated that he is just going to “facilitate” the negotiations between Tehran and Riyadh. But such wordplay doesn't change the fact that Iranian leaders do not consider Khan neutral.

Khan chose a side by picking Riyadh for his inaugural state visit in September 2018. He has visited there since, but only made his first official appearance in Tehran in April 2019, and it was no surprise that he didn't receive a warm welcome when he was received by the acting health minister at Mehrabad Airport.

That was the prime minister's only visit to Iran before he emerged recently as a “facilitator” in easing Gulf tensions.

Khan’s many visits to Saudi Arabia probably were due to Islamabad’s tough economic situation when Khan took office. But that doesn't change that at the moment, Pakistan is on better terms with the Saudis. Khan even implied this during his so-called peace initiative, reiterating Pakistan’s “unwavering support and commitment to the security of the Two Holy Mosques” in Saudi Arabia. This was not a helpful comment.

The last, but not least, factor that leaves observers less than optimistic about Khan’s initiative is the complexity of the tension between Iran and Saudi Arabia, as well as regional realities between two archrivals. Let’s take a look at a couple of the keywords commonly found in dialogues between Khan and Iranian officials these days. Both Rouhani and Ayatollah Khamenei referred to the Yemen war during their meeting with Khan as a “key to regional issues."

The Yemen war is one of the main reasons behind the growing tension between Tehran and Riyadh: They side with opposing forces. But why is that so important to Iran? Arash Saffar, a Tehran-based analyst in the Arabian Peninsula, told Al-Monitor: “Iranians believe they [through the Houthi rebels] have the upper hand in Yemen at the moment, so they would prefer to sort things out in Yemen now. The recent meeting between Iran’s supreme leader and Houthi officials, and Iran's acceptance of [Houthi-backed] Ibrahim al-Deilami as the new Yemeni ambassador to Tehran in early September, indicate that Iran would insist on an integrated Yemen with Houthis claiming a large share of power in it.”

By "upper hand," Saffar was referring to the large-scale, late-September attack on Saudi Arabia along its border with Yemen in which Houthi rebels claimed to have killed 500 Saudi soldiers, captured more than 2,000 of them and seized a large number of vehicles and ammunition. Those claims have not been verified.

“Saudis have lost their confidence, specifically after the assault on the Abqaiq and Khurais [oil] facilities Sept. 14, so they are inclined to negotiate the peace terms with Houthis more than ever. While they are trying to promote some sort of federalism in Yemen, they now have accepted the Houthis' unavoidable role in Yemen's future,” he said.

The situation in Yemen, along with Trump's seeming aversion to armed conflict, has given Iran an advantage over Saudi Arabia. This brings us to the second essential keyword in Khan's discussions with Iranian officials: sanctions. Rouhani said that to settle Iran-US tensions, "the United States has to return to the [nuclear agreement] and abandon sanctions.” It's no secret that the Iranian government believes tension with Saudi Arabia is tightly related to the issues between Iran and the United States, specifically after Trump’s withdrawal last year from the nuclear deal, the Joint Comprehensive Plan of Action. This notion was conveyed during the supreme leader’s meeting with Khan, too, though Saudi Arabia wasn't explicitly mentioned.

While there could be some progress in Yemen in the near future, the hostile relations between Iran and the United States suggest no promising breakthrough at the moment. This, along with Khan’s intimate ties with Saudi Arabia and the long history of Pakistan’s failures when it meddles in Tehran-Riyadh affairs, has dealt Khan a very tough hand of cards to play. At best, expect nothing more than armed silence between two rivals following the Pakistani premier's initiative.