Lebanon protests also bring Syrians, Palestinians out onto the streets

Many of the 1.5 million Syrians and 174,000 Palestinians in Lebanon are taking part in the recent protests. 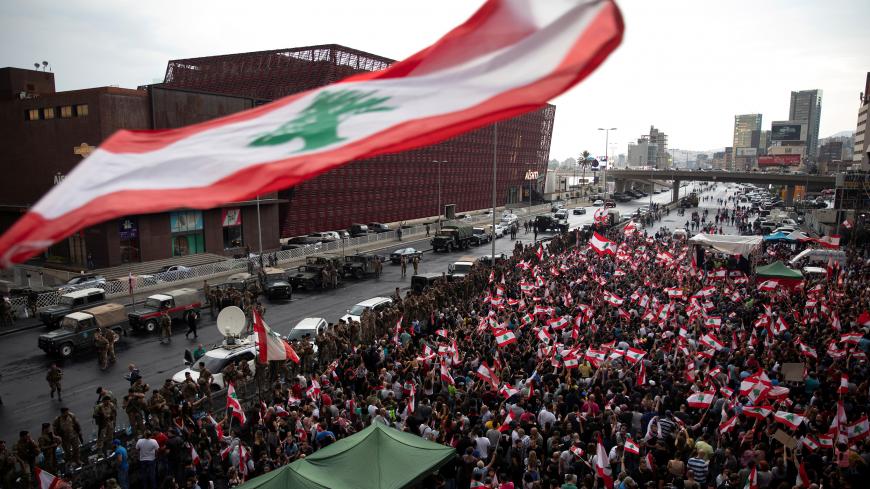 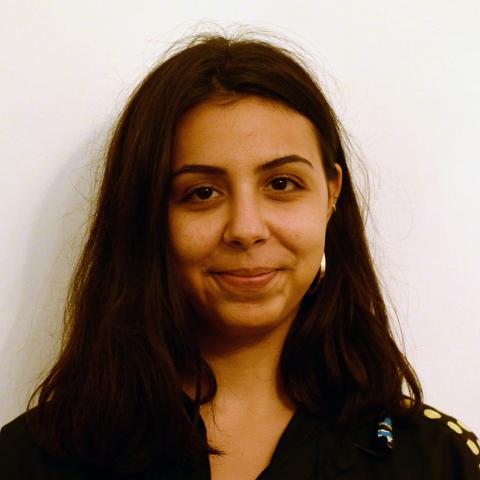 For the seventh day in a row, the Lebanese masses take to the streets, trying to keep the momentum going on a movement that was born seemingly out of thin air, for fear of it slipping through their fingers. Artists reclaim public spaces with graffiti and music, and manouche stands supply the protesters with an energy boost.

But it is not only the Lebanese nationals who are out on the streets — the non-Lebanese residents are also there. The latest numbers state that there are more than 1.5 million Syrian refugees and about 174,000 Palestinian refugees in Lebanon, and many are protesting at Riad El Solh Square. The Lebanese melting pot, colored by intersecting regional trauma, makes it possible for different groups to protest and express hope together.

“These are people [Syrians and Palestinians] who live in this country,” Rima Majed, sociologist at the American University of Beirut, told Al-Monitor. “This is not a revolution only for the Lebanese. Whatever decisions the government is taking, it has repercussions on their lives, so of course they are part of [the protests].”

The discontent of the Lebanese has increased since the Syrian crisis, particularly as many worry that the Syrians are taking their jobs.

“Fixing the Lebanese situation is going to fix the Syrian situation and the perception of Syrians,” the Syrian-Filipino rapper known as Chyno told Al-Monitor. “It’s like we are all in this rat race and the pie is so small, so you always feel like you have to blame somebody; but if everybody gets to eat — especially the Lebanese community — then there is not going to be that perception of Syrians we have here.”

But what drove a wedge between these communities — unemployment — has now brought them together.

“The year before you graduate you have this plan that a year later you're going to have your own job, move out of your parents’ house, buy a car,” Mohammad, a Syrian national, 28, said. “Well you do graduate, but it is just the same old. Staying at your parents' place, eating their food, working horrible jobs. You get depressed as a Syrian, because this is the reason they give you, why you are not accepted for the jobs. But if you look around, Lebanese people aren’t finding jobs either. So, do I believe it is [the revolution] going to affect us, foreigners? Eventually yes. But I don’t think it should until it serves the needs of the Lebanese citizens.”

Palestinian nationals are battling the same contradictions, with an added emphasis on the question of their perpetual struggle for nationality and legitimacy.

“I feel the pain that they feel because we are also oppressed, so it is the same situation — we are all going through the same,” Yara Zakka, a Palestinian born and raised in Lebanon, told Al-Monitor. “If the sectarian system is canceled then it would make a difference, because the only reason they will not give Palestinians [Lebanese] citizenship is because the number of Muslims would increase in Lebanon. So if that changes there would be no reason for them to not give us citizenship.”

During the recent protests, Palestinians wore keffiyehs and Syrians yelled the chant they know all too well — “The people want to bring down the regime.” Taking to the streets adds another layer of uncertainty for these refugees, particularly for those who are illegal or who are in the process of obtaining residency permits.

“When I was too lazy to come down here, I felt a lot of guilt,” Mohammad noted. “Even though I’m not Lebanese, I still live here. Plus they are my brothers and sisters; I was raised with them. We live here, our families are here, our friends are here. Leaving this country is as hard on us Syrians as it is on Lebanese people — I mean it’s the same, it’s our home.”

“I’m part of this country, even if it is not on paper. I was born here, and I didn’t choose to be stateless, or what religion I belong to,” Zakka said. “When they teargassed us, I was screaming and everyone else was screaming and helping each other; it was nice because nobody cared where I was from. I felt like I was one of them when they were helping me, because usually when people know that I am Palestinian — at the airport, for example — nobody helps us, they just let us suffer.”

The "foreign" participation at the protests has been met with mixed reactions on the part of the Lebanese citizens.

“In the end, this revolution is for the Lebanese,” Layal, a 28-year-old Lebanese national, told Al-Monitor. “In general, the presence of the Palestinians and Syrians in Lebanon — mostly illegally — is one of the problems of corruption that we are facing. So of course I don’t agree with that; they are part of the problem.”

“Now is the moment for the first time as youths to imagine a future, to imagine something that is not imposed on us,” Jude Swearky, a 23-year-old Palestinian, told Al-Monitor. "There is this new wave of a more connected Arabism across different countries since the 2011 Arab Spring. So this isn’t just a revolution for Lebanon; it’s a revolution for thought, it’s an inspiration.”

On Oct. 21, Prime Minister Saad Hariri responded to the protests with a list of economic reforms, which for the most part seem largely unachievable. This was met with clear rejection on part of the protesters on the ground, who have called for a general strike in response.

The demands of the protesters — even when they do not agree — stand unanimous on one front: that all demands are met. Trust has been damaged and people are hungry for change, say the protesters who brush aside questions about Hariri’s speech and promises with dismissive answers. There are calls for a completely new regime in the hope it would bring change and improve the standard of living.

“They are the simplest human rights — a job, a chance to just have a future, not even a better future,” Mohammad said. “Where you don’t have to borrow money and take out loans, wondering will I ever make enough money to even think about starting a family, buying a house? There are no answers to these questions, even if you look five or 10 years into the future, you couldn’t see any ray of hope. Until [last] Thursday night [when protests began]. Mabrouk [Congratulations].”