Lebanon continues to struggle under weight of Syrian refugee crisis

Lebanon is struggling to cope with the Syrian displacement crisis amid weak international action. 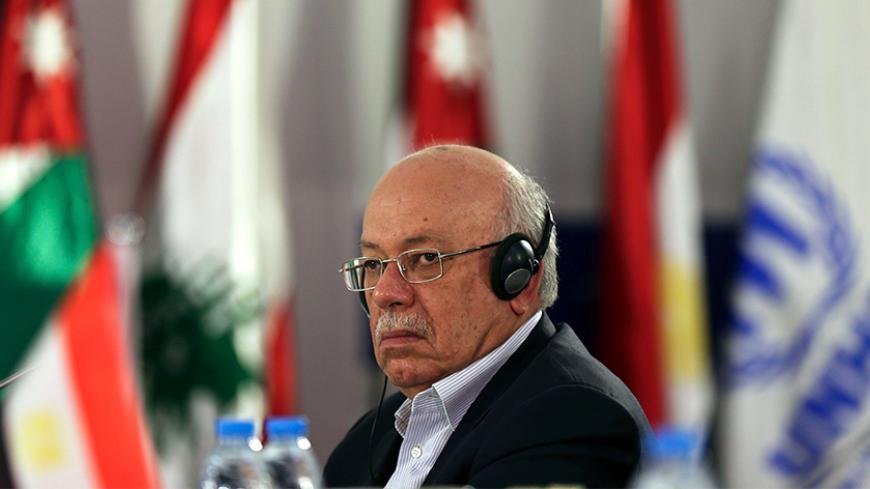 Lebanese Social Affairs Minister Rashid Derbas attends the opening of a meeting of foreign ministers at the Zaatari refugee camp in the Jordanian city of Mafraq, near the border with Syria, May 4, 2014. - REUTERS/Muhammad Hamed

Despite all the international attention given to the issue of displaced Syrians in Lebanon, Lebanese Minister of Social Affairs Rashid Derbas confirmed that a humanitarian disaster is in the offing, and that such a disaster is likely to affect all of Lebanon.

While Derbas confirmed that these visits focused on the issue of the displaced Syrians in Lebanon, he noted that “tangible results are yet to be reached.”

Europeans have been voicing great concerns over Syrians traveling from Lebanon to their countries — be it by sea or via the airport in Beirut — but this has yet to result in serious action aimed at alleviating the plight of the displaced in Lebanon, the minister said.

“We explained to UN and Western officials who visited Beirut that a demographic, social, economic, environmental, security and military explosion is in the offing. Despite all the measures taken to try to alleviate the wave of displacement to Lebanon and prevent any further increase in the number of displaced, the fact remains that there are 1,117,000 Syrians officially registered in Lebanon. Add to these the foreign workers in Lebanon and the Palestinian refugees inside and outside the camps,” Derbas said.

These factors led some unpublished studies by the Ministry of Social Affairs, according to Derbas, to confirm that “the ratio of non-Lebanese to Lebanese residents on Lebanese territory is 1-to-2. In other words, half of Lebanon’s residents are non-Lebanese.”

The same studies, the Lebanese minister continued, “showed that the dense population in our country has almost reached 570 people per square kilometer, while the country’s infrastructure — water, electricity, roads, transportation, sewage networks, and so on — is only designed to accommodate a maximum of two-thirds of this figure. However, these estimates show that this infrastructure has certainly been fully consumed and has been unable to accommodate any further population increase for the next two years.”

Derbas told Al-Monitor that there are other factors worsening the crisis and presaging an explosion. “First of all, we are in a country where constitutional institutions are paralyzed and Lebanon has been without a president since May 25, 2014. Second, both the government and parliament have been somehow crippled as a result of several political differences and divisions — the evidence being the lingering waste crisis since July 17,” he said.

He added, “The Lebanese gross domestic product growth prospects amount to almost zero for the current and next two years with no solution or breakthrough in sight, and Lebanon is failing to deal with the situation. For example, our numbers suggest that public and private schools in Lebanon have only been able to accommodate about 100,000 Syrian students, while the number of school-aged Syrians in Lebanon exceed 700,000. This means that about 600,000 Syrian children and teenagers are left to wander the streets of Lebanon.”

In the throes of this disaster, the minister said, “The United Nations World Food Program warned us that it was going to stop food aid for the displaced in Lebanon. This led me to raise the following question to WFP officials I met: 'Do you know what could result from such a step? This simply means that 1 million people on Lebanese territory will be pushed to the edge of hunger. Do you know what that means?'"

Asked about possible solutions that could swiftly put an end to this disaster, Derbas said, “The solutions are limited and leave little margin [for change]. For example, countries that are able to accommodate displaced people should widely open their doors to Syrians.”

The second solution, he added, “is to revive the idea of safe areas either inside Syria or along its border with Turkey.”

He said, “More than 45% of Syrian territory — that is, 80,000 square kilometers [roughly 31,000 square miles] — is now considered safe, which is more than eight times the size of Lebanon. In other words, the displaced can now return to those safe areas, but this would require regional and international cooperation, Gulf financing, facilitations on the part of Turkey and finally US, Russian and UN cover.”

Asked what would happen if neither of the two solutions were to be implemented, the minister provided no answer — pessimism seemed to have gotten ahold of him.