After its own citizens drown, Lebanese refocus on refugee crisis

The refugee crisis in Lebanon has again made headlines with the drowning deaths of Lebanese fleeing the border region due to the Syrian war and heading for Europe. 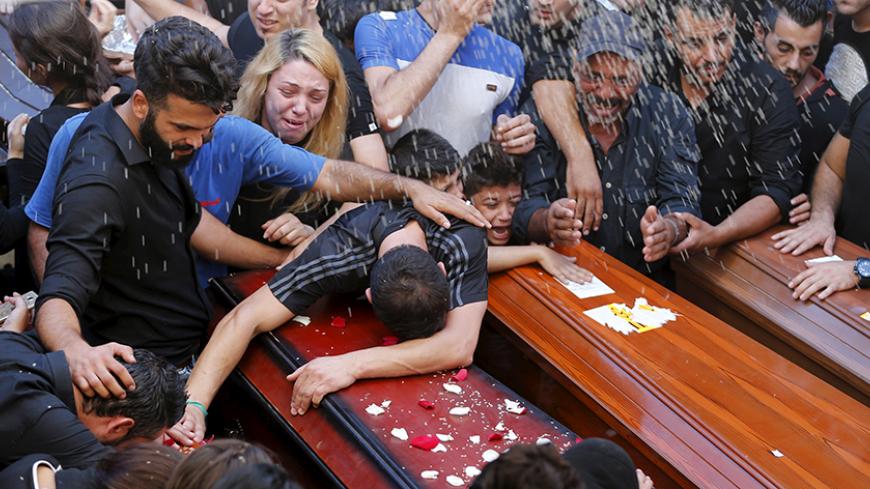 Relatives mourn members of the Safwan family, who drowned on a boat carrying them from Turkey to Greece, during their funeral in Beirut's southern suburb of Ouzai, Lebanon, Oct. 22, 2015. - REUTERS/Mohamed Azakir

The recent deaths of Lebanese citizens, along with Syrian refugees, trying to illegally migrate from Turkey to Europe has refocused attention on the impasse in Lebanon in dealing with so many displaced people. The refugee issue is an urgent humanitarian priority as well as a tragedy for Syrians and Lebanese alike, yet no serious solutions are in sight.

The issue crept back into the headlines with news that on Oct. 12 nine of 12 members of the Lebanese Safwan family, traveling aboard a rubber boat from Turkey trying to reach Greece, had drowned when the boat was punctured and sank. The tragedy highlights the Syrian and Lebanese dimensions of displacement to and in Lebanon.

The Safwan family had lived in Qarqaran, a small village adjacent to the Syrian border in northeastern Lebanon. The village had been abandoned some three years ago because of the nearby Syrian war, which had led to the presence of extremists, instability and the inability to pursue livelihoods. These conditions led members of the Safwan family to join the wave of Syrian displaced persons, fleeing to Beirut's southern suburbs. They then traveled from the Lebanese capital to Istanbul and from there to Izmir and then to tragedy off the Turkish coast.

The family's journey is a common one. A representative at a travel and tourism company in Beirut confirmed that there are more than five daily charter flights between Beirut and Istanbul with an average of 150 passengers per flight. Although most of the travelers today are young Syrians, there are also Lebanese among them. The representative, speaking on condition of anonymity, said that it has become common for passengers to steal the life jackets stored under the seats in airplanes for use during anticipated sea journeys from Turkey to Europe. Authorities at the Istanbul Ataturk and Sabiha airports are now reportedly apprehending passengers who disembark from Beirut with life jackets in their possession. Although tourism season in Istanbul has been winding down with the end of summer, the season of escaping the hell of displacement continues, as the number of passengers arriving holds steady.

Sea travel from the port of Tripoli is another journey that Syrians displaced to Lebanon are selecting. A Lebanese government official speaking on condition of anonymity told Al-Monitor that the number of people fleeing via Tripoli is no less than the number traveling from the Beirut airport. The only difference is that most of those choosing the maritime route do not have official travel documents. Some of them try to sneak aboard vessels, while others present forged documents, knowing that Lebanese authorities will turn a blind eye to facilitate the forward travel for such people.

What is the current situation in the Syrian exodus to and from Lebanon? Lebanese Minister of Social Affairs Rashid Derbas told Al-Monitor that the official number of displaced Syrians registered in Lebanon decreased from the beginning of 2015 through the end of September, from 1.2 million to 1.117 million, a drop of some 83,000 people.

Derbas said the drop can be attributed not only to the onward travel of displaced Syrians to Europe via Turkey but also to stricter conditions at the Lebanon-Syria land border crossings for Syrians to be registered as displaced. The new procedures have been in force since Jan. 5.

The tragedy of displaced Syrians in Lebanon is far from being reduced. According to Derbas, their social, educational and security situations are worsening by the day. This explains the recent persistent attempts to illegally enter European countries, leading Europe toward what Derbas called a “demographic Chernobyl.”