Amid the crippling economic and social crises in Lebanon, dozens set off from the shores of impoverished Tripoli, before their boat capsized leaving six dead and many more missing. 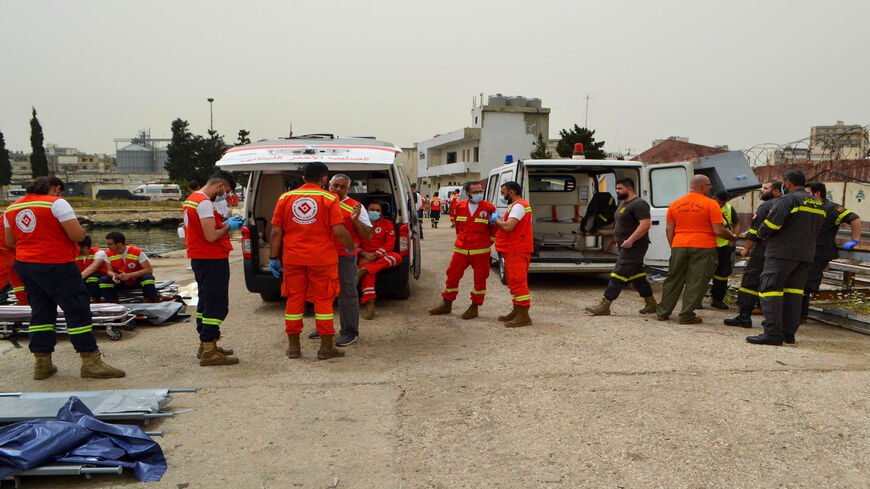 Medics wait on the pier as soldiers search for survivors off the coast of Tripoli, after an overloaded migrant boat capsized during a chase by naval forces, Lebanon, April 24, 2022. - Fathi al-Masri/AFP via Getty Images

BEIRUT — The tragedy of the migrant boat capsizing off the coast of Tripoli in north Lebanon on April 23 is still at the fore of national news. Out of the unknown number of asylum-seekers crammed onto the boat when it set off, 45 survived and the bodies of six people were recovered. A large number of women, children and men are still missing.

Director general of the Tripoli port Ahmed Tamer told Al-Monitor, “The search for those missing is still ongoing, but within the limited capabilities of the army. The Lebanese military has requested assistance from UNIFIL and several countries.”

He added, “It is believed that the migrant boat sank to a depth of about 400 meters [1,300 feet], making it difficult to recover it. According to the families of victims at the port, 23 people are missing, all of them women and children. These numbers are likely to go up. There is no hope of finding survivors.”

Immediately after the accident, 10 Lebanese Red Cross ambulances headed to the port, and search and rescue operations by the Lebanese army began by land, sea and air off the shores of Tripoli.

The exact number of asylum-seekers on the overloaded boat is still unknown. The United Nations refugee agency, UNHCR, and the International Organization for Migration said in a joint statement that the capsized boat carried more than 84 people. No official number has been set by the Lebanese authorities so far.

Al-Monitor spoke to one of the survivors. Bilal Dandashi said, “My wife and I and our four children tried to save ourselves. Me and my two sons Ibrahim and Mustafa were rescued, but the rest of my family is still missing."

He added, “We were heading to Italy seeking a better life. There were about 60 people on the boat, all families. We raised together the funds needed to buy the boat.”

The accident has stirred tension and anger in Tripoli, one of Lebanon’s poorest cities, with residents blocking roads and staging sit-ins, amid resentment over the delay in retrieving the bodies of those missing.

Nisreen Merheb, a relative of one of the missing asylum-seekers, told Al-Monitor, “Seven of my family members are missing — my cousins ​​and their three children.”

She lamented the inefficient and careless search operations. “All the survivors said that the women were in the cabins of the boat on the lower deck. So why haven't their bodies been retrieved yet? There are many questions,” she said.

Merheb added, “We want our loved ones — dead or alive. We want a grave to cry over. We are terrified of the idea that their bodies may never be recovered.”

The survivors are blaming the Lebanese navy for sinking the boat, saying a navy vessel that chased them to force them back to shore had rammed the packed ship.

Tripoli-based social activist and lawyer Nihad Salma told Al-Monitor, “The authorities were supposed to handle this tragic incident differently. The army’s statement explaining the circumstances of the incident has hit the concerned families like a thunderbolt. They were expecting an announcement of a probe, but instead the statement seemed to pin the blame on those who tried to immigrate clandestinely across the sea.”

Shortly after the accident, the Lebanese army said in a statement that the boat was carrying more than 60 people and set off illegally from the shores of Lebanon. It denied being behind the boat capsizing.

Salma said, “The army command must keep searching for the missing people and hold a transparent investigation to uncover the truth behind the accident.”

Salma pointed to mounting tension among the people who lost loved ones as they are convinced that the missing are still inside the boat that sank. “If no action is taken, this tension could culminate into escalating movements on the street.”

According to survivors, Palestinians and Syrians were also on board, but the majority of passengers were Lebanese.

The commander of the naval forces in the Lebanese army, Col. Haitham Dhanawy, said the boat was built in 1974, and was a small boat of 10 meters (33 feet) long and 4 meters (13 feet) wide, with a permissible load of only 10 people.

“We tried to prevent the boat from leaving, but it was faster than us,” he said during an April 24 press conference in the Naval Operations Room.

The accident comes at a time Lebanon is battling its worst economic and financial crisis that has impoverished many of its citizens, especially in Tripoli, the second-largest city in Lebanon and one of most impoverished. As the summer approaches, more clandestine immigration operations are taking place by sea, particularly from the north.

The collapsing national currency and the inflating prices of goods and services, including basic goods such as medicine and bread, is making Lebanese citizens — whose meager income is paid in the Lebanese pound that has hit an all-time low against the US dollar — feel trapped. The majority of the citizens are unable to make ends meet and blame the political authorities for applying wrong and inefficient economic and financial policies over the past decades.

Yahya Mawloud, member of the political bureau of the LNA party, a social democratic party founded in 2021, told Al-Monitor, “Whoever has been to Tripoli can see how hopeless its citizens are. They have no access to electricity, water, education or medicine. They are not afraid of taking risks. They do not care about the consequences since they have nothing to lose.”

He added, “All the survivors said they were heading to a country that respected them as human beings, unlike Lebanon where people lack all basic necessities, where there is no freedom, no democracy and no basic human rights.”

He explained that people immigrating illegally are fleeing injustice. “If the state had secured them 5% of their rights, none of them would have taken this risk,” he noted. “Clandestine immigration from Tripoli by sea started in 2014. The city was already poor before the crippling economic crisis in 2019 and the coronavirus pandemic. More than half of its population were already living at or below the poverty line; the crumbling national currency only made things worse.”

Meanwhile, some argue that the incident in Tripoli is being exploited by the political authorities to postpone the upcoming elections, scheduled for May 15.

Mawloud said, “We have always had doubts that some political figures will try to postpone the elections. We can only wait and see. In all cases, the upcoming elections will definitely be undemocratic, in light of the dominance of the ruling political elite and amid the current economic and social crisis and its consequences on the voters.”

He concluded, “Despite all that, I believe the end of this regime in Lebanon is near. The situation in Lebanon has gone from bad to worse, and a social explosion is inevitable.”