Aoun sees role for Hezbollah until threats to Lebanon cease

Speaking to Al-Monitor ahead of his address to the UN General Assembly in New York, Lebanese President Michel Aoun spoke about the refugee crisis facing his country, Hezbollah's role amid the ongoing regional crisis and Beirut's expanding ties with Moscow. 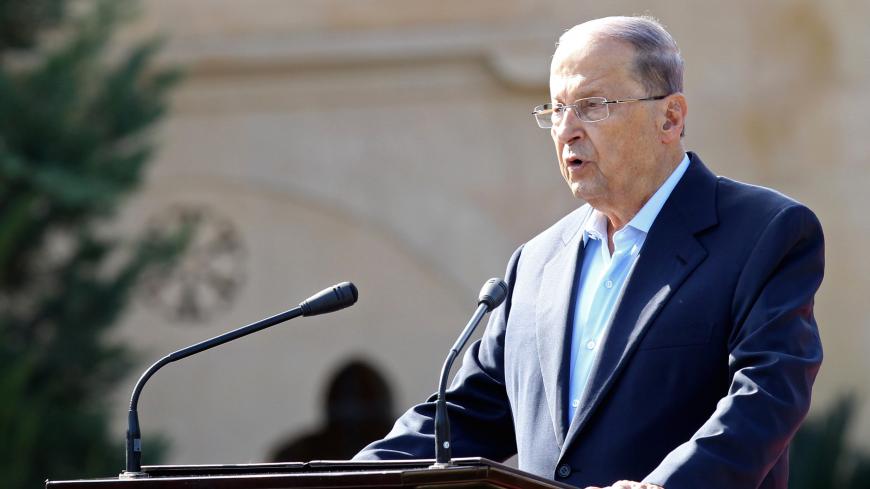 Lebanese President Michel Aoun delivers a speech during a rally celebrating his election at the presidential palace in Baabda, Lebanon, Nov. 6, 2016. - GETTY/Anwar Amro

NEW YORK — Lebanese President Michel Aoun, speaking to Al-Monitor Wednesday evening prior to his address before the UN General Assembly today, said that any solution to “the problem of Hezbollah” would have to come as part of a wider solution to the crises plaguing the region.

Aoun, who as head of the Free Patriotic Movement met with Hezbollah leader Hassan Nasrallah in 2006 to agree on defining relations between the two groups and disarming Hezbollah, said that Lebanon cannot ask the latter to disband as long as the country still faces threats. “You cannot say to Hezbollah, ‘We have to dismantle your organization,’ since Israel is provoking Lebanon and it is attacking,” he explained.

The president also spoke about the refugee crisis facing his country, which now hosts upward of 1.5 million displaced Syrians. Aoun said the Lebanese government isn’t getting enough support on this issue, stressing that Lebanon “is paying more than the international community to help the refugees” at a time when it is facing economic and security crises.

Yet Aoun said international parties should focus on helping Syrians get back to their homes, rather than merely providing support to those displaced. While thousands of such repatriations occurred last month, these transfers have been criticized by international aid groups as failing to ensure returnees’ welfare.

He also rejected recent calls for the United Nations Interim Force in Lebanon (UNIFIL) to take a more active role in curbing Hezbollah’s activities on the southern border, saying it is “not a military force” and that Lebanon “cannot give them … a mission to inspect the homes of the people to see if they have weapons or not.”

A transcript of the interview, conducted by Al-Monitor’s managing editor, slightly edited for clarity, follows:

Al-Monitor:  As the Syrian conflict continues, Lebanon is now hosting over 1 million refugees. The Lebanese government has called for more aid from international parties, including the EU and Washington. During meetings — during President Trump's meetings with Prime Minister Saad Hariri earlier this month — President Donald Trump stressed the military angle, responding to a question about refugee support, by saying, "We are helping. And one of the things that we have made tremendous strides at is getting rid of [the Islamic State]." What additional forms of support would you like to see?

Aoun:  Well, America is still helping. And we are doing a good job, because we are getting rid of [IS], and I think it's going very well. But the international community doesn't help the Lebanese government. And we are paying more than the international community to help the refugees or displaced people in Lebanon because we have to provide them with water, electricity and everything else to make their life in Lebanon easier. The others, they are giving them food — but we are educating children, Syrian children. The schools are open twice a day, one session in the morning and one in the afternoon. And the hospitals are full.

All of these services are provided by the Lebanese government, and we are living under three crises. First, the global economic crisis certainly influenced our economy. Second, the war all around us has limited [our access to] Arab countries, because the only [land] access we have to the Arab countries is Syria. Otherwise, we have to go by plane, and this is not suitable for commerce. It is not the economic way, you know, to [conduct trade]. And the third crisis is the displaced people. And it is the most expensive.

Al-Monitor:  What other priorities will you address in your meetings here this week?

Al-Monitor:  Recent operations against Islamic State fighters on the Lebanese-Syrian border have revived debate about cooperation between the Lebanese army and Hezbollah. You have previously said that as long as the Lebanese army isn't strong enough to defend against threats, there is a need for Hezbollah to have weapons. Do you foresee further cooperation in the future, and are you concerned that this could negatively impact the army's international support?

Aoun:  Hezbollah, you know, is a Lebanese organization that was founded to liberate our territory from the Israeli occupation. It was created for that in 1985, and then later, in 2000, Israel withdrew from Lebanon and we believed that the action of Hezbollah was finished.

And I met with them [in early 2006 as head of the Free Patriotic Movement] and signed a memorandum of understanding about how to [disarm] Hezbollah and to maintain a dialogue for that, but in [the summer of] 2006, Israel attacked once more. And it's complicated, this situation. You cannot say to Hezbollah, "We have to dismantle your organization," since Israel is provoking Lebanon and it is attacking. Last week, they attacked twice. The first attack, it was not on Lebanon, but it was from the airspace of Lebanon to Syria. And after that, they simulated an air attack on Sidon, and they broke windows of houses. They broke the sound barrier and [the sonic boom caused damage]. This was at a low altitude, just over the buildings.

Actually Hezbollah has become a component of the regional crisis. If we have to solve the problem of Hezbollah, it would be within a general solution to the Middle East crisis, especially in Syria.

Al-Monitor:  Last month, the UN Security Council extended the mandate of UNIFIL, yet UN Ambassador Nikki Haley argued that UNIFIL must step up its patrols and inspections to disrupt Hezbollah's illicit activities. Given Hezbollah's strong presence in the area under the UNIFIL mandate, do you foresee this being an issue in future debates concerning the force?

Aoun:  UNIFIL is not a military force to be used; they are observers. We cannot give them a combat mission or a mission to inspect the homes of the people to see if they have weapons or not. They are there to observe the borders of Lebanon and Israel and to count how many times the Israeli aircraft goes through Lebanese borders.

Al-Monitor:  I have one last question. Prime Minister Hariri recently traveled to Moscow to discuss boosting economic and military ties with Russia in his first visit to the country as premier. How can boosting Russian ties support the Lebanese economy, and are you planning military cooperation with Russia to counter extremist militants?

Aoun:  Right now, we don't have any accord with Russia about that kind of trading, mutual trading from Russia and to Russia. But they are showing goodwill for that. I think if I visit the Russians, at that moment [we will] decide what we'll do. But we have some Russian weapons. I think we need some ammunitions for these weapons — they can help from the military side.