Israel hampering Palestinian economy at its own risk

Under the policies of Prime Minister Benjamin Netanyahu and President Donald Trump, the Palestinian economy, which was supposed to grow and bolster peace and security in the process, has become a source of utter despair for Palestinians. 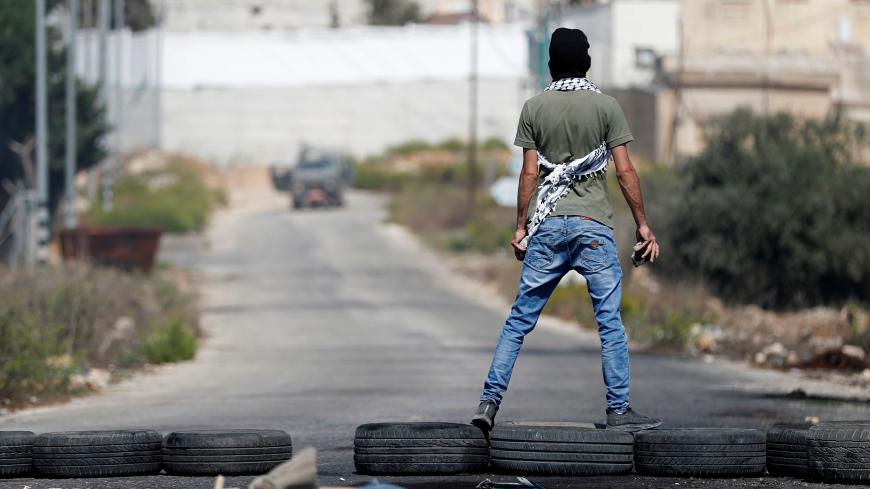 A demonstrator stands on tires in front of Israeli forces during a protest to show solidarity with Palestinian prisoners held in Israeli jails, near the Jewish settlement of Beit El, Israeli-occupied West Bank, Oct. 1, 2019. - REUTERS/Mohamad Torokman

First, the good news. Israel is about to transfer NIS1.8 billion ($515 million) to the Palestinian Authority (PA), part of the duties and taxes it has collected for the Palestinians. The two sides hope this will end the crisis stemming from Israel’s decision this past February to withhold some of those funds in a bid to prevent the PA from disbursing regular stipends to Palestinian inmates jailed in Israel and to their families and to former prisoners.

Until now, Palestinian President Mahmoud Abbas had refused to accept any of the funds, insisting that Israel transfer all the money due to the PA or none at all. The bad news is that the fund transfer is like prescribing an aspirin to cure a cancer patient. Israel freezing the tax revenues is only one cause, and not the chief one, of the severe chronic illness afflicting the Palestinian economy.

The illness stems mainly from the sharp decline in overseas donor funding to the PA (from $1.23 billion in 2013 to $516 million in 2018), the cutoff of US funding for UNRWA (UN Relief and Works Agency) to provide humanitarian assistance to Palestinian refugees, and the limits Israel imposes on the free movement of Palestinians in the West Bank and Gaza. Avichai Snir, an economist at Bar-Ilan University and the Netanya Academic College, told Al-Monitor that transferring the tax money would shrink the decline in per capita gross domestic product from 2% to 1%. Also according to Snir, an expert on the economy of the occupied territories, since the PA's departments account for a significant portion of the Palestinian economy, the increase in its debt is hampering private sector growth. As a result, unemployment stands at almost 18% and is much higher among younger Palestinians.

“Every increase in unemployment will have severe repercussions,” Snir warned. “We are not very far from the stage at which the straw breaks the camel’s back.” This, he added, is why Abbas decided to accept the money even though Israel continues to withhold funds. “He has no choice,” Snir explained. “His budget deficit is simply too deep.” Even after Israel transfers the funds, this year will still not be a good one for the average Palestinian.

The right-wing authors of the law authorizing the withholding of funds are depicting Abbas’ recent decision to walk back his refusal to accept money from Israel as an important victory in the government’s fight against terrorism. Brig. Gen. Eran Niv, commander of the Israel Defense Forces' (IDF) Judea and Samaria Division and whose tenure is soon to end, has confirmed that the PA payments to jailed inmates constitute an economic incentive that influences some Palestinians' decision to attack Israelis. In a Sept. 27 interview, the senior officer told Haaretz, “We’ve had situations where people took part in an attack that they knew would result in a sentence exceeding five years, because it would increase the amount of aid their family would get from the PA.”

PA Civilian Affairs Minister Hussein al-Sheikh, who participated in the talks with Israel on the fund transfer, was quick, however, to tweet, “[The PA] is determined to continue paying the stipends to the martyrs and their families.” Thus that particular motivation of young, unemployed and despairing young Palestinians to attack Israeli targets remains unchanged.

“For people in dire economic straits, it [an attack and imprisonment] is definitively a factor,” Niv said. “There isn’t a day when we don’t prepare for the possibility that the Tanzim could take up arms against us again,” referring to the military faction of Abbas’ Fatah movement. Snir added that in 2018, more than 200 terror attacks were foiled, and every year during his tenure Israeli security forces had arrested some 3,000 people on suspicion of involvement in terrorism or other violence.

Nonetheless, the officer who spent the past few years at the heart of the West Bank stressed that no more than 1% of West Bank residents are involved in violence. Thus, Snir said, the point is to ensure that all the others remain uninvolved. To do so, the IDF and Shin Bet receive assistance from the tens of thousands of Palestinian police officers employed and paid by the PA. “Without a doubt, without it [security coordination] we would be in a very different place,” Niv asserted. “We would be vulnerable to a significant increase in attacks in the West Bank.”

Israel has long been aware of this. In October 2011, during the Barack Obama administration and Republican control of the House of Representatives, Brig. Gen. Nitzan Alon, then-commander of the Judea and Samaria Division, warned about the security repercussions of halting aid to the Palestinians in response to their request that Palestine be recognized as a state.

Alon told the New York Times, “Stability in the region includes the ability of the Palestinian Authority to pay its salaries.” He added, “As long as they [Palestinians] see them [PA forces] as patriots working to build a Palestinian state, they will be able to keep working with us.” The senior officer had no qualms about stepping into a political minefield by asserting, “If there is no political horizon, cooperation is endangered…. We can’t do our mission only with military tools; diplomacy and economy are very relevant.”

Alon's courageous opinion, expressed to the world’s leading newspaper, indeed made waves, but it soon turned to froth upon the water. The Obama administration’s Israeli-Palestinian peace initiative failed to stem the creeping annexation of the West Bank and to lift the siege on Gaza. The Palestinian economy, which was supposed to grow batches of carrots to bolster the peace and boost security, turned in the hands of the Israeli government and the Trump administration into a pile of sticks obstructing peace and undermining security.

In an Oct. 3 Knesset speech in which Prime Minister Benjamin Netanyahu urged his political rival Benny Gantz to join a unity government, Israel's current leader focused on the “Iranian threat,” which, he said, presents Israel with a security challenge unprecedented since the 1973 Arab-Israeli war. Not a word was said about the Palestinian threat around the corner, a diplomatic, moral, and security challenge since 1967 to this very day. In inviting “all who believe in a Jewish and democratic state” to join a government under his leadership, Netanyahu scratched the bleeding, open sore of Israel’s policy of occupation and annexation. A democratic state of the Jewish people is a contradiction in terms.