Turning the West Bank into the economic twin of the Gaza Strip will provoke new threats to Israel's security, which is why the US administration leans toward cooperating with the new Palestinian unity government. 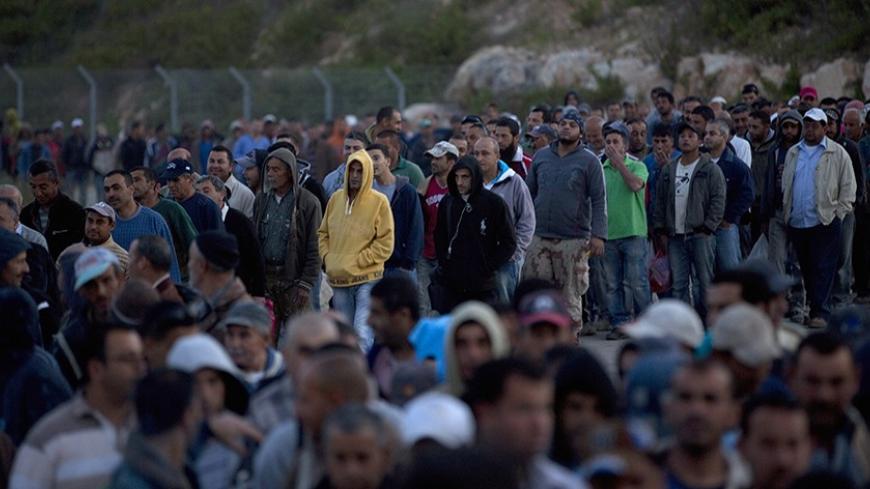 Palestinian laborers wait to cross into Israel at dawn at Hashmonaim checkpoint near the West Bank village of Nilin, west of Ramallah, March 14, 2013. - REUTERS/Darren Whiteside

One should not put too much diplomatic stock into the threats of Israeli Prime Minister Benjamin Netanyahu to sever ties with the Palestinian Authority (PA), in reaction to the inclusion of Hamas in the new Palestinian government. Even when Hamas was a pariah in Ramallah, the nine months of negotiations did not generate anything near a permanent arrangement.

The diplomatic damage will be nothing compared to the economic implications of severing contact with the PA. Turning the West Bank into an economic twin of the Gaza Strip will result in a similar situation in terms of security, as well. Initial signs of this are already evident in a new-old phenomenon of attacking Israeli journalists covering the occupied territories.

To enable Palestinian President Mahmoud Abbas to take part in the "process," taxpayers in the donor countries Ad Hoc Liaison Committee (AHLC) have transferred some $2 billion of their finest money into the PA's coffers. Absent even a semblance of negotiations on a solution of the conflict, the management of the conflict will become a mission impossible.

The Republican majority in the US Congress will take advantage of the alliance with Hamas to reduce or even completely void the line item of aid to the PA, which in any case is not a particular favorite with the conservatives. The heads of the EU states will have a hard time justifying to their voters continued support for the defunct peace process.

Cutting off diplomatic ties, which will damage and perhaps put an end to the security coordination, is expected to deter the handful of foreign businessmen who are considering investments in research and development in the West Bank.

An official death certificate of the September 1993 diplomatic agreement known as the "Oslo Accord" will also ring the death knell, in theory and in practice, for its economic appendix known as the Paris Protocol, which is celebrating its 20th anniversary these days. The agreement included joint taxation by Israel and the PA; its legal significance is a lack of economic boundaries between the two partners, whereas its practical significance is continued dependence of the Palestinian economy on the Israeli one. The agreement also anchored the total Palestinian dependence on Israel in everything relating to trade with the world. Implementing the “closure and blockade” method that Israel applies against the Hamas Gaza government, also on the Fatah-Hamas government in the West Bank, will turn all of the occupied territories into one big slum.

Nothing symbolizes this dependence and the implications of severing ties more than the danger of cutting off electricity. Since the blockade, Gaza residents have not enjoyed a single day of uninterrupted power supply. Now the Israel Electric Corp. is threatening to cut off the current to residents of the West Bank and East Jerusalem for several hours a day. The company hopes that the threat will convince the PA to repay its 1.5 billion shekel (some $430 million) debt.

But when the PA's deficit reaches $1.6 billion, and the Israeli government is seeking every possible way to punish Abbas for his embrace of Hamas, the residents of Ramallah and of the Shuafat refugee camp would be well-advised to stock up on candles.

The huge debt to the Electric Corp. comes on top of the PA's many debts to the private sector in the territories and to banks, which add up to $350 million. According to estimates by Israeli economist Avichai Snir, who follows the Palestinian economy closely, the debt will grow this year by $400 million to $450 million. Snir notes that to extricate themselves from this crisis, the Palestinians need an annual growth of 6-9%. But according to World Bank data, growth in the occupied territories, including the Gaza Strip, only reached 2% in 2013. This, compared with 11% in 2010-2011 and 5.9% in 2012. (In Gaza, growth declined from 14.7% in 2011, to 6.6% in 2012. In the West Bank, it dropped in the same period from 9.4% to 5.6%.)

On the other hand, there is no significant difference between the level of prices and cost of living between the two sides of the Green Line. About one-third of the private sector workforce (106,000 people, mostly women) make less than the minimum wage of 1,450 shekels (about $406) a month. The public sector, which offers higher pay, has become a center of attraction for talented workers from the private sector. Thus, the public sector in the West Bank has become the largest public sector in the world in terms of its relative contribution to the gross national product.

The large majority of public sector employees in the occupied territories are security personnel, supplied with deadly weapons and military training. Israeli security experts are warning that an Israeli and international boycott of the PA, and an aid cutoff, will be by way of shooting Israel in the foot. Defeated policemen, hungry and unemployed, might well target their weapons first of all toward the heads of the Fatah leaders, who promised them a state, bread and work. Next in line will be the Israeli rulers.

In an article they published exactly a year ago, in May 2013, headlined "The Palestinian Authority and the Economy: A Government Hanging by a Thread," researchers Yitzhak Gal and Ephraim Lavie (formerly head of the Palestine desk at the Military Intelligence Research Department) warned of the severe results of a continue diplomatic deadlock.

They wrote that even though the vast majority among the Palestinian public and leadership is interested in continued security calm that will ensure progress in building the state and the economy, the deadlock could bring about popular unrest directed at Israel and the PA. "Under these circumstances," the two wrote, "the positions of Hamas and other opposition groups might be strengthened, undermining the stability achieved through Israeli military presence in the area and security coordination."

As reported recently, the US administration will be satisfied if the new Palestinian unity government, and not Hamas (per se), remains faithful to the three conditions laid out by the Quartet (a halt to violence, recognition of Israel and adherence to previous agreements). This shows that the United States is aware of the far-reaching implications of an economic boycott of the PA — in response to a Hamas refusal to adopt the three principles.

The decisive demand of the Netanyahu government that the Hamas leadership wave a white flag should serve as a black flag for the Israeli bathers spending time by the beaches. Half an hour's drive from the lifeguard's hut, the ground is burning and there's no lifeguard.