Ticking time bomb: not a license to torture

The terrible damage done to Palestinian Samer Arbid, who is suspected of heading a terror cell, could harm Israel much more than the harm that would have occurred had torture not been used on him. 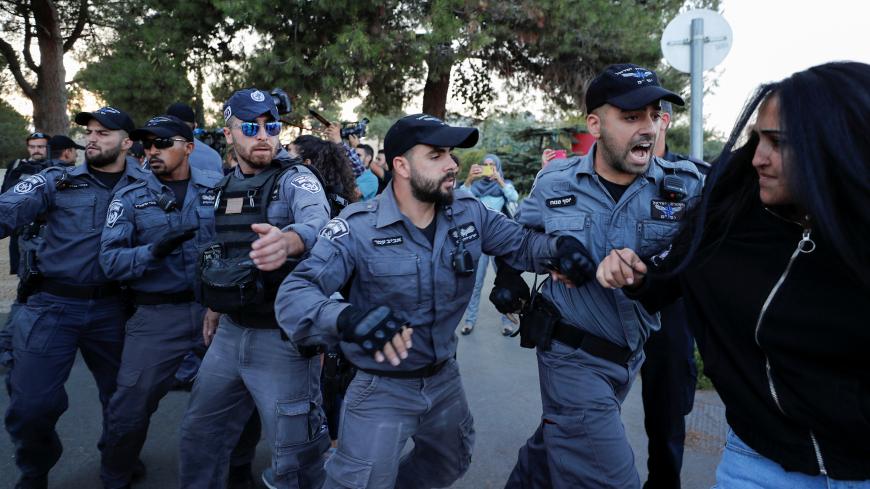 A Palestinian demonstrator scuffles with Israeli security forces during a protest against Israel held after a detainee suspected of killing an Israeli teenager in a bomb attack was hospitalized during interrogation, in Jerusalem October 1, 2019. - Reuters/Ammar Awad

For many years, the Shin Bet would obtain information from those suspected of involvement in Palestinian terrorism by means of some level of violence. There was also a special ministerial committee, which authorized the use of force for specific suspects, although according to international law the use of torture in interrogation is forbidden. Period.

As minister of justice I was supposed to take part in that committee. A senior Shin Bet official would come before the committee, explain why in certain cases there is “no choice” but to use violence, and the few ministers who were members of this committee voted.  I was surprised to see that in the first committee meeting I attended I was the only person opposed to these authorizations, and there was no relevance to the party affiliation of the ministers voting. All of them authorized all the requests.

I declared that I wouldn’t participate in this committee’s meetings because its very existence is illegal, and to my great joy it was disbanded a short time later. Not because of me but because of the famous High Court decision that outlawed the torture of interrogatees in September 1999.  Once torture was forbidden the ministerial committee was disbanded.

Following the terrible damage done to Samer Arbid, who was hospitalized Sept. 28 after a violent interrogation, and who is suspected of heading the terror cell that caused the murder of Rina Shnerb near the West Bank Dolev settlement, I recall what happened 20 years ago. According to all indications, these events have not succeeded in decisively ending violent interrogations by the Shin Bet.

The Shin Bet then argued that the High Court decision takes away a key tool for the prevention of terrorism. As far as it was concerned until the decision, it could have used the decisions of the commission headed by retired Justice Moshe Landau, which had approved 12 years earlier, in 1987, “moderate physical pressure” in Shin Bet interrogations, when the circumstances warrant it. The extent of “moderation” of the pressure was determined, until then, by the agency’s interrogators. The Shin Bet’s argument against the 1999 decision was that the judges do not understand the difficult situation in the field, and that in their air-conditioned rooms in their pretty building in Jerusalem they decide on acts that would paralyze the work of the agency. At the time, I praised the court’s decision, and added that it could bolster the need for more sophisticated and more efficient interrogation, and reduce, to a great extent, the lies interrogatees tell under torture, saying anything to stop the pain.

Then head of the Shin Bet, my friend Ami Ayalon, came to my office accompanied by a senior interrogator. Ayalon asked if I would be willing to experience what the interrogatees experience, and I answered in the positive. The interrogator sat me on a chair in unpleasant positions, tied my hands and demonstrated acts on my body that he said are done during a violent interrogation. The difference was that in the demonstration every act of torture was done for a short time, and I assumed that in reality these are perpetrated for long hours.

Ayalon demanded, urgently, to pass the Shin Bet law and overcome the High Court’s decision by providing the possibility to determine “the defense of necessary” ahead of an interrogation. The “defense of necessary” — or "necessity defense" — became in those weeks a major player in the battle between the High Court and the Shin Bet. This is a clause in Israeli criminal law, which exempts from criminal liability someone who committed a crime in order “to save his life, liberty, his body or his property or that of another from a real danger of serious harm, which arises from a given situation at the time of the act, for which there was no other means but to do it.”

The judicial decision determined that this clause does not allow interrogators to use it in order to question suspects, and that the only way to use it is in retrospect, i.e., if there is a situation when an interrogator feels that the only way to achieve what he needs in order to save life is to transgress the law — what is called a “ticking time bomb” — he could explain this to the judicial system and it could take it into account. Ayalon demanded that the use of the “defense of necessity” would be granted by the new law ahead of time in order to prevent interrogators from criminal liability.

The system raged. Then-Prime Minister Ehud Barak demanded to legislate the law. The attorney general, Elyakim Rubinstein, supported his demand. The deputy attorney general, Menachem Mazuz, opposed it. A committee was established. I told the prime minister that there’s no way I would present to the Knesset a proposed government law that allows torture, and that if such a law is proposed, I would resign immediately. Eventually, the law was not proposed, and the Shin Bet had to find new means to obtain information from its interrogatees and to continue to do its essential and important work in order to protect us.

Later, in 2002, when the Shin Bet law was legislated under a different government, it did not include any clause related to interrogations and permission for violence in the course of interrogations. In December 2018, the High Court formulated a (precedential) distinction between the use of “torture” in interrogation and the use of “special means,” which despite being forbidden could be used in the context of the “defense of necessity” “in relevant cases.” But this is a distinction that does not exist in international law and that is not relevant to interrogatees, because there is no real difference between these means and what is called “torture.”

The 1999 High Court decision showed Israel at its best: a state under various terror threats, which develops various means to fight it, and is capable of upholding the values of democracy and respect for the law even in difficult times that seemingly call for letting loose and responding “from the gut.” The governments that have ruled Israel in the past decade have changed these norms, more than once, by means of saying something like, “You don’t know what the Arabs do to us!”

We must not continue down this slippery slope, where we do not treat people — even the worst and most dangerous of them — as human beings. The terrible injuries a suspected head of a terror cell sustained could harm Israel far more than any damage that could have been caused if it didn’t use physical pressure. If the government to be formed in Israel would be a different government, it should act on this sensitive topic and return the situation to where it stood immediately following the 1999 High Court decision. Israel is capable of fighting terrorism and interrogating suspects without using violence against them. This would combine proper democratic behavior and the prevention of errors.