Palestinian President Mahmoud Abbas has made East Jerusalem polling stations a requirement for elections for the Palestinian Parliament. 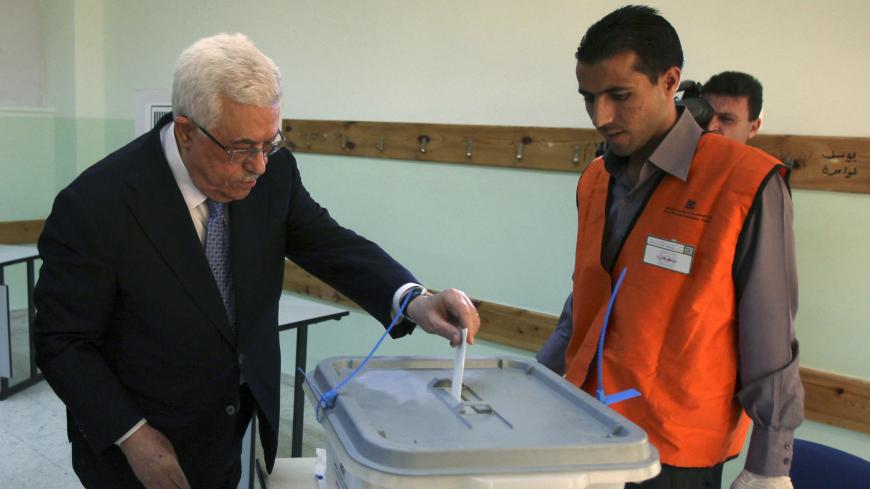 Palestinian President Mahmoud Abbas is making elections for the parliament and chairmanship of the Palestinian Authority conditional on the placing of polling stations in East Jerusalem. He first said so at the United Nations General Assembly summit in September and then reiterated his position at a meeting of the Palestinian leadership in Ramallah Oct. 6. He also revealed that the PLO and Fatah formed two committees to looking into the issue of holding elections, together with the relevant parties. Who are those relevant parties? The political leadership in Israel, which would have to allow these Palestinian elections to be held in East Jerusalem too. Abbas' decision to make parliamentary elections conditional on whether Israel allows residents of East Jerusalem to vote further complicates an already complex issue.

Is Abbas not aware of this? Is it possible that his condition is little more than a cynical ruse intended to avoid holding elections at all?

In an interview with Al-Monitor, senior Fatah member Qadura Fares said that various international factors are trying to convince Israel to place polling station in the eastern half of the city. He explained that the European Union has been pressuring Abbas to hold elections for the Palestinian Parliament for a long time, adding that German Chancellor Angela Merkel told Abbas explicitly, “You need to hold an election.” That is not some insinuation. It is a demand.

“Ever since the Oslo Accords, there have been two reasons the Europeans have given money to ensure the continued existence and operation of the Palestinian Authority,” said Fares. “The first is based on the assumption that this would lead to progress in the peace process and eventually, to peace with Israel. The second reason is that the EU supports developing countries in order to sell them on democratic principles.”

The PA's last election took place in January 2006. Concerned about the rise of Hamas, Abbas tried to postpone the elections until President George W. Bush finally pressured him to hold them. Abbas ended up getting burned. Hamas emerged as the winner. Fatah lost the election, and he lost Gaza. While it is impossible to turn back the clock, new elections in the PA 14 years later have become a necessity.

“There is no diplomatic process and there doesn’t appear to be one on the horizon, so the least we can do is promote democracy,” said Fares. Now that the United States has cut aid to the Palestinian Authority, the last thing Abbas wants is a cut in support and contributions from the European Union.

In order to hold these elections, Abbas will have to get through two hurdles: Hamas and Israel. Abbas is leaving the Israeli hurdle to the international community. As for Hamas, there is progress in contacts between it and the PA. Gal Berger reported on Kan 11 Oct. 11 that Hamas leader Ismail Haniyeh sent a letter to Abbas stating that Hamas was withdrawing its demand that elections for the parliament and the presidency be held simultaneously. Hamas is now willing to accept parliamentary elections first, with a presidential election to follow three months later. In so doing, the movement that controls the Gaza Strip has agreed to accept the guidelines for Palestinian elections as proposed by Abbas.

The Israeli defense establishment believes that holding elections for the Palestinian Parliament will prevent a war of succession once Abbas is out of the picture and avert chaos in the West Bank. There also are those who believe that these elections will bring new faces into the Palestinian political system, particularly younger figures with no ties to the two main movements, Fatah and Hamas. Despite its concern that the elections will give Hamas a foothold in the West Bank, Israel believes more in the possibility of new forces joining the fray and ultimately leading the Palestinian Authority to a much better place.

The bigger question is whether the political leadership in Israel, which is now fighting for its own survival, is capable of assessing the situation and engaging in a serious discussion about the PA’s request to place polling stations in East Jerusalem. Everything depends on that.

In 2006, residents of East Jerusalem voted in polling stations that were set up in schools and community centers under the supervision of the international community, headed by former US President Jimmy Carter. Prime Minister Ehud Olmert approved of the move, reassuring Israelis, “There will be no propaganda by Hamas,” and “Hamas activists who enter East Jerusalem will be arrested.”

Hamas won those elections not by the 5,000 votes cast for it by residents of East Jerusalem, but because of the feeling of disgust that many voters in the Gaza Strip and in the West Bank felt toward the corrupt Fatah government and their deep disappointment with the peace process with Israel. A lot of water has flowed under the bridge since then. The political right came to power in Israel, Hamas launched a successful coup in Gaza, President Donald Trump declared Jerusalem to be the capital of Israel and the struggle over the city intensified on the basis of principled religious and political perspectives.

“Israel should have no problem” agreeing to this, said Fares. “After all, Palestinian residents of the city are not citizens of the State of Israel. While they do have Israeli ID cards, these IDs do not give them the right to vote for the Knesset. They have no citizenship.” According to him, voting for the Palestinian Parliament “will not change anything about the status of the city, as far as you are concerned. It would be better to hold elections based on agreement, instead of all the tumult that would result from holding them behind Israel’s back.”

The problem is that when Abbas makes this a condition, he is actually pushing Israel into a corner and forcing it to make a decision. It is doubtful that will help to advance the cause of new elections in the PA.