Palestinian President Mahmoud Abbas' announcement before the UN that he will call for elections in Palestinian territories seemed to be an attempt to prevent Hamas and Israel from objecting to the long-awaited voting. 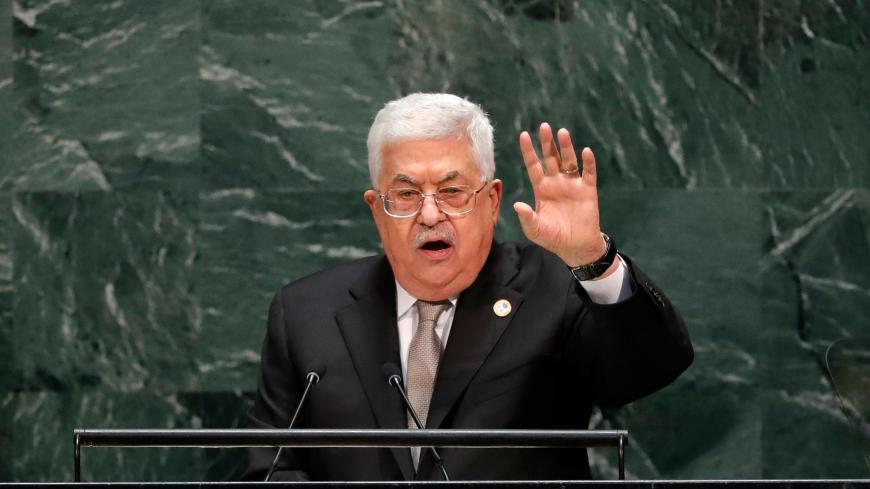 RAMALLAH, West Bank — Palestinian President Mahmoud Abbas has formed a committee to follow up on his pledge to call for general elections in the West Bank, the Hamas-controlled Gaza Strip and Israeli-controlled East Jerusalem.

He formed the committee Oct. 1 from members of his party on the Fatah Central Council. When he spoke Sept. 26 before the UN General Assembly meeting, Abbas called on the UN and relevant international parties to oversee the elections. He blamed Hamas for the violent 2007 Palestinian split and accused it of obstructing elections.

The last presidential election was held in 2005; Hamas won the last legislative election, in 2006.

Palestinian law stipulates that presidential and legislative elections be held every four years.

The president was supposed to have issued a decree setting a specific date for the legislative elections earlier this year, in accordance with a Supreme Constitutional Court decision in December. That ruling dissolved the Palestinian Legislative Council, with the understanding that Abbas would hold new legislative elections within six months.

Abbas is well aware of the obstacles to the elections, namely that Israel could prevent them from being held in Jerusalem, and Hamas could prevent them in the Gaza Strip. Yet his public statements could set a path for the international community to blame Hamas and Israel for delays. During his General Assembly speech, he said that any party that objects to the elections "will be responsible before God, the international community and history.”

Ahmed Majdalani, a member of the PLO Executive Committee, told Al-Monitor the possibility that Hamas could prevent the elections in Gaza "leads to the question of whether it's possible that the electoral process would not involve Gazan voters and candidates." He added, "Such a thing requires consideration and the right decision to be made."

He said it would be difficult to hold the elections without including Jerusalem. He pointed out that the upcoming efforts will be centered on a way to involve all parties, including Hamas, in the elections, because the ballot is the right way to end the Palestinian divide.

It's unclear whether Abbas will call for holding the presidential and legislative elections simultaneously or separately, or whether elections will focus only on the legislature. Hamas has said elections for president, parliament and the PLO National Council must be held concurrently.

Majdalani said the PA is keen on holding the elections and considers them a national and popular milestone. He added that the PA will use all means to hold the elections, such as resorting to Arab, regional and international parties to pressure anyone trying to block them.

A PLO source told Al-Monitor on condition of anonymity that Abbas chose to make his election pronouncement before the UN to deliver the message to the international community that it must take action and pressure Israel to allow the elections to be held in Jerusalem.

"The [Palestinian] leadership embraces the firm stance that no elections shall be held unless Jerusalem is involved, given the dangerous political dimension of not including it, particularly since [US President Donald] Trump recognized Jerusalem as the capital of Israel. Thus, holding the elections in Jerusalem is intrinsic," the source said.

Nabil Amro, a top Fatah official and member of the PLO Central Council, told Al-Monitor that some states, which he did not name, strongly blame the PA for delaying the presidential and legislative elections this long.

Commenting on the options available for Jerusalem and the Gaza Strip, Amro said the "list vote [proportional representation] will make it easier for Gazans to vote and run in the elections."

He added, "Hamas will be subject to harsh criticism by Palestinians and to tremendous blame by various countries if it objects.”

When it comes to Israel, Amro said, “A political dispute or clash over the elections with Israel that would prevent them from being held in Jerusalem would [invite] condemnation at the international level and accusations against Israel of hindering Palestinian democratic life.”

Although there is a need for the Palestinian presidential and legislative elections to be held to restore political legitimacy, it doesn't seem likely that voting will take place successfully in Gaza or Jerusalem. Yet releasing a presidential decree calling for the elections and setting their date would allow Abbas to achieve more than a goal. He would meet the commitment he made before the international community at the UN, eliminate any international criticism of the PA for delays and point the finger of blame at Hamas and Israel as the parties disrupting the elections — which would lead to an international denouncement of them both.