Israel dragging its feet on allowing Palestinians in east Jerusalem to vote could be just the excuse President Mahmoud Abbas needs to postpone the elections and stop Hamas' likely progress. 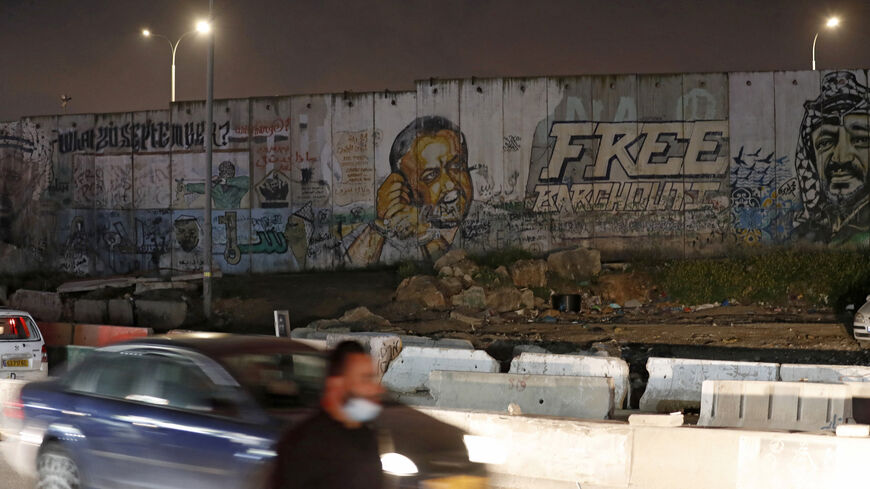 A picture taken on March 31, 2021, near the Israeli Qalandiya checkpoint between Jerusalem and Ramallah shows a mural of imprisoned Palestinian leader Marwan Barghouti, who has endorsed a list of challengers opposing President Mahmoud Abbas's Fatah movement in the upcoming legislative elections. - AHMAD GHARABLI/AFP via Getty Images

Shin Bet chief Nadav Argaman reportedly told Palestinian President Mahmoud Abbas at a recent meeting that until Israel installs a new government, he will not get an answer regarding permission for residents of east Jerusalem to vote in the May 22 Palestinian elections. Abbas declared in January that the Palestinians would hold a parliamentary vote that has been postponed repeatedly since its 2010 by disputes between Fatah and Hamas.

Argaman need not have bothered to try to dissuade Abbas, who should have known the type of trouble he was courting by holding the vote. “He was certain the elections would enable the Palestinian Authority to return to the Gaza Strip or at least grant it a foothold there,” a senior Israeli security source told Al-Monitor on condition of anonymity. “Instead, by declaring elections Abbas is about to provide Hamas with a foothold in the West Bank.”

The question now is whether his stubbornness and honor will compel Abbas to keep his word and hold the elections as scheduled. Reports have begun to emerge this week in the Palestinian Authority and Israel about a possible postponement amid mounting tensions. Hamas warned last week that delaying the elections would stir public frustration and unrest that could deteriorate into clashes with Israel, and that the Israeli-Palestinian clashes that broke out in Jerusalem and elsewhere last week would pale in comparison.

Israeli security officials are warning that Palestinian elections at this time would be disastrous, a regional and international catastrophe. They warn that rather than the PA regaining a foothold in Gaza, from which it was ejected by Hamas following the 2006 parliamentary elections, Hamas would gain a foothold in the Palestinian Authority. The movement is heading into the elections as a united front, while Abbas’ Fatah faction is more divided than ever.

If Hamas does as well as expected, Abbas will be forced to form a unity government with the organization, empowering its leaders Ismail Haniyeh and Yahya Sinwar and facilitating international legitimization of the group widely perceived as a terrorist organization. Israeli officials fear that a changed perception of Hamas on the international stage could cause lasting damage not only to Israel, but to the Palestinian Authority as well.

Israel views Hamas as a terrorist organization that must be isolated at all costs. But the Palestinian Authority also regards the group as a threat. “Fatah is heading into these elections divided into 36 splinter factions, while Hamas is united. This is cause for concern,” another Israeli security source told Al-Monitor on condition of anonymity.

Israel stalling on granting east Jerusalem Palestinians permission to vote could allow Abbas a way out. “He need not cancel the elections,” an Israeli diplomatic source told Al-Monitor on condition of anonymity. “He need only delay them indefinitely, until the political situation in Israel becomes clear.”

In intensive talks in recent weeks with top Palestinian leaders, Israel has made it clear that the election timing is particularly bad, given Israel’s political instability and uncertainty over the makeup of its next government. An additional factor the Israelis cited in cautioning the Palestinians against the election is the US administration's continued lack of a clear policy on the issue.

The Israelis have told the Palestinians that the coronavirus morbidity in the Gaza Strip and West Bank is also a factor to be considered. While official numbers are lower, Israeli estimates hold that very large portions of the Gaza and West Bank’s Palestinian residents could be infected.

“Luckily for them, their population is one of the youngest in the world,” said an Israeli security official who spoke on condition of anonymity. “That is why the systems there have not collapsed.” Either way, Israel has made it clear that holding elections in the midst of a raging epidemic poses difficulties.

Abbas will have to make a decision within days. Hamas' veiled threat of a violent reaction should the voting be postponed highlights the dilemma both he and Israel face. Israel is trying to calm the unrest that erupted in east Jerusalem over Israeli Ramadan restrictions at the Damascus Gate to the Old City, and Abbas would also like to see calm restored.

And what are the Americans telling him? “Their position has not crystalized fully,” a senior Israeli military source told Al-Monitor on condition of anonymity. “There is no way a Democratic administration can openly support delaying elections, but they are hinting that if Hamas emerges strengthened and joins a Palestinian government, the US would have a hard time continuing its financial aid to the PA in light of current legislation that bans support for Hamas and expected opposition in Congress.”

Everyone is now waiting on Abbas. Israel has not officially denied permission for east Jerusalem residents to participate in the voting, preferring instead to ignore the issue.

If Abbas truly wants elections, he could set up special voting stations for east Jerusalem residents outside the city. But the contest that was supposed to hand him a victory in the waning days of his rule could turn out to be a painful defeat opening the gates to Hamas.

“The strategic goal of Hamas is to make inroads into Fatah and PLO institutions, into the heart of the Palestinian consensus, and from there to take over control of the Palestinian Authority,” the Israeli security source said. “At the same time, Hamas is seeking some form of international legitimacy. An election victory or a significant achievement are exactly what Hamas is hoping for right now, and Abbas could end up granting them their wish.”