Al-Monitor has learned that President Mahmoud Abbas is getting ready to postpone the Palestinian general elections under the pretext of Israel’s yet to be announced reponse to a request to allow Palestinians in Jerusalem to vote. 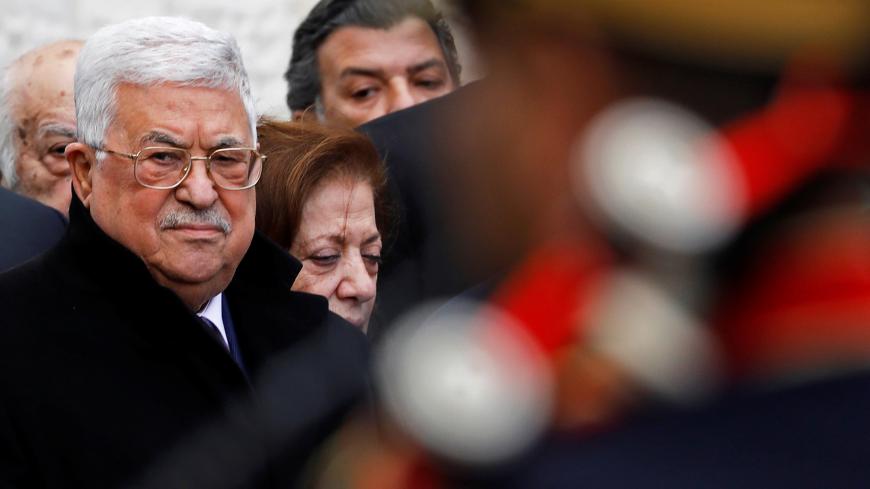 GAZA CITY, Gaza Strip — A high-ranking source in the Palestinian presidency told Al-Monitor that President Mahmoud Abbas is leaning toward postponing the release of a presidential decree that would determine the time frame of holding Palestinian general elections (legislative and presidential) until further notice. This came after Israel’s irresponsiveness to the Palestinian request to allow the elections to be held in Jerusalem, which might jeopardize the whole process.

The 1995 Oslo II Accord states that Palestinians in Jerusalem have the right to participate in Palestinian elections, provided that Israel makes arrangements to implement this step.

The presidential source reported that Abbas asked the European Union (EU) and Russia to pressure Israel to allow holding elections in Jerusalem and giving Palestinians there the right to vote, like it was the case in 1996, 2005 and 2006.

On Dec. 18, the Office of the European Union Representative in Jerusalem announced its readiness to support Palestinian elections politically and financially in the West Bank, the Gaza Strip and East Jerusalem, as soon as Abbas issues the election decree.

The source added, “Some European countries [without naming them] are trying to pressure Abbas into releasing the election decree first, because that would help them pressure Israel more to abide by international law, which considers East Jerusalem part of the occupied Palestinian territories in 1967.”

During his participation in the Christmas Eve celebrations for Christian churches that follow the Eastern Orthodox Liturgical calendar in Bethlehem Jan. 6, Abbas said, according to the official Palestinian news agency Wafa, “Either elections are held in Jerusalem too, or not at all. Some are insisting that we issue the election decree, but we cannot. If we issue it and then have to cancel it, we would face a big problem.”

Fatah spokesman Hussein Hamayel told Al-Monitor, “Abbas refuses to issue the election decree before getting Israeli approval for Palestinians in Jerusalem to vote. Otherwise, Palestinians would be admitting Israeli sovereignty over Jerusalem.”

He added, “This cannot happen, because we will never recognize any form of Israeli sovereignty over East Jerusalem, the capital of Palestine.”

Hamas, which won the legislative elections in 2006, is also bent on not holding elections without Jerusalem. But, at the same time, Hamas is calling on Abbas to issue the election decree without waiting for Israeli approval to hold elections in Jerusalem.

Suheil al-Hindi, a member of Hamas political bureau, told Al-Monitor, “We can force Israel to approve by creating public clashes with Israeli authorities in Jerusalem, similar to the public protests in Jerusalem through which the Palestinians forced Israel to remove the electronic gates in front of Al-Aqsa Mosque on July 25, 2017.”

He argued that such clashes would push the world to put political pressure on Israel to force it to allow Palestinians in Jerusalem to participate in the elections.

Hindi condemned Abbas’ inclination to postpone the elections until further notice. He said, “Such a measure will only entrench the [Palestinian] division and prevent unifying Palestinians behind one authority and a joint political program.”

Ahmad Awad, political science professor at Al-Quds University in Abu Dis, told Al-Monitor, “There is a pressing Palestinian need to hold the elections, as they are a constitutional duty that has been suspended since the last elections in 2006. They also are the best solution to end the Palestinian rift.”

He added, “It is important to hold the elections to renew Palestinian legitimacy, which is an international demand. The policies of states and international bodies offering the PA financial support — especially the EU — require publicly elected official bodies to deliver this aid to them.”

Awad said it was unlikely Israel would allow Palestinians in Jerusalem to participate in the coming elections, like the previous ones. The US declaration of Jerusalem as Israel’s capital on Dec. 6, 2017, only weakens the possibilities, he noted.

Awad noted, “I believe the elections will be delayed, because of this hurdle.”

Mustafa al-Sawaf, political analyst and writer at Felesteen newspaper in the Gaza Strip, told Al-Monitor that he doubts Abbas’ seriousness in holding general elections on the Palestinian territories.

He said, “Abbas’ announcement before the United Nations on Sept. 26, 2019, to hold elections was done under international pressure, as Palestinian elections have not been held for 14 years.”

He noted, “But I think Abbas is neither ready nor serious about the elections because of Fatah’s internal issues, mainly [the dispute with] Fatah’s Democratic Reformist Current led by defected leader Mohammed Dahlan.”

According to Sawaf, Abbas thought Hamas would refuse to participate in the elections on condition of achieving Palestinian reconciliation first. But Hamas’ approval was shocking, he said. He added, “For that reason, Abbas sought other impediments by insisting on linking the election decree release to Israeli acceptance to hold elections in Jerusalem. Abbas wants to hold Israel accountable in front of the whole world for his failed attempt to hold general elections.”